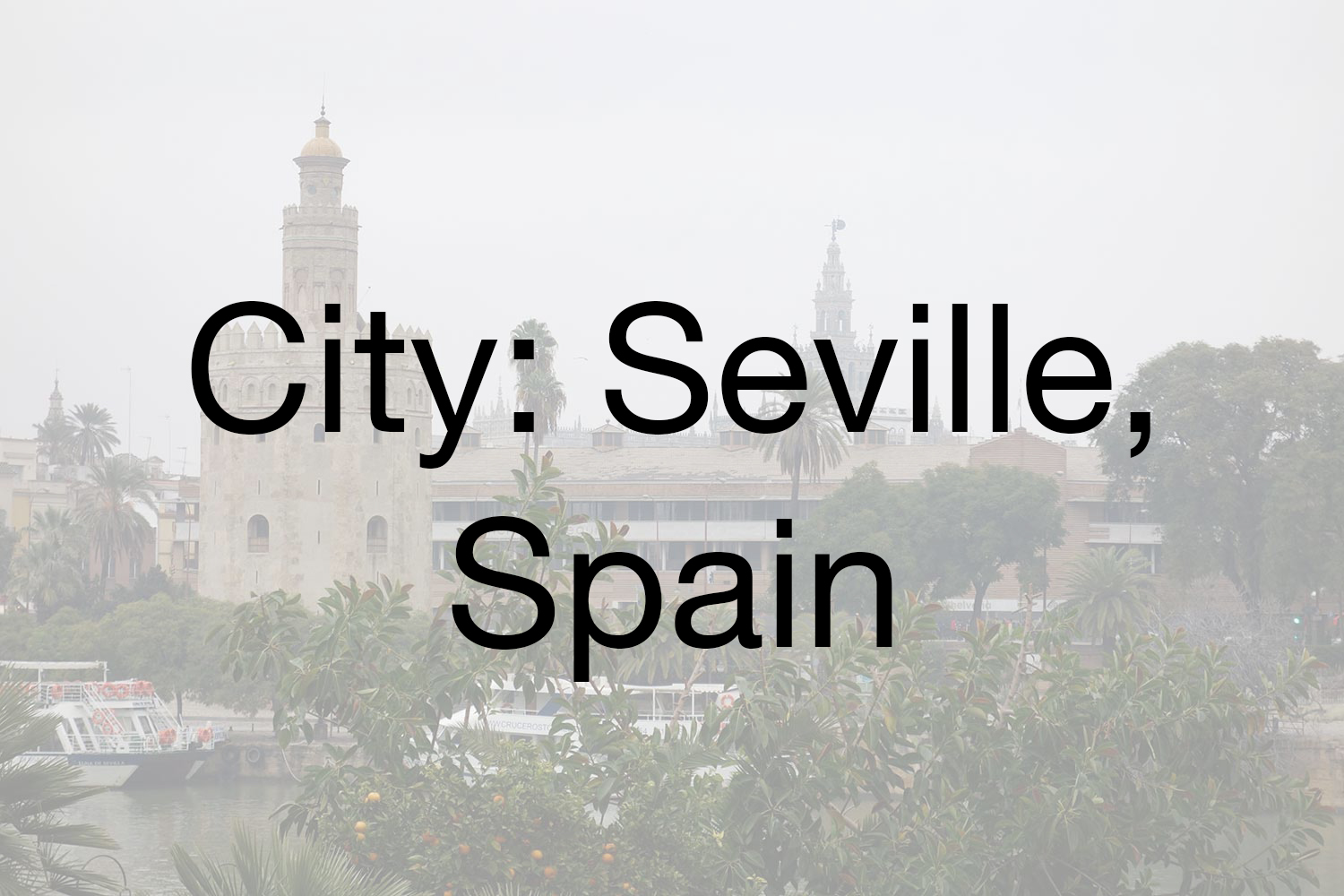 Seville, located in the Andalucía region of southern Spain, straddles the Guadalquivir River. Founded by the ancient Iberians, the city had a long history of conquest and settlement by the Phoenicians, Romans, and Visigoths, before a combined Arab and Berber army conquered it in 712 CE. During its five hundred years of Islamic rule (between 712-1248 AD), Seville (Arabic: Ishbiliya) expanded beyond the confines of the Late Antique walled city.
The core of Islamic Seville included the area on the east bank of the Guadalquivir where the Cathedral (constructed on the site of the twelfth-century Almohad Great Mosque), the Christian Alcázar, and the medieval quarter known as the Barrio Santa Cruz are located today. The city center included the palaces and government buildings surrounded by residential quarters, each with its neighborhood mosques and public baths. Under the rule of the North African Almoravids and then the Almohads, beginning in 1147 AD, Seville replaced the Umayyad city of Córdoba as the capital city of al-Andalus. During the course of the tenth and eleventh-centuries the city expanded beyond the confines of the Roman walls, requiring the construction of new walls and fortifications. A remnant of this period of refortification is extant at the city's once vibrant commercial port on the Guadalquivir River, the Torre del Oro (completed 1220 AD). This tower exemplifies the Almohad's approach to guarding the ports' southern end.
Seville's most famous Islamic monument is the Giralda tower, formerly the minaret of the Great Mosque constructed in the late twelfth-century under the Almohad caliph Abu Ya'qub Yusuf. It and the Patio de Naranjas that served as the courtyard of the Great Mosque, are all that remain of the Almohad monument, which was destroyed to make way for the Cathedral, which follows the footprint of the old mosque. The Alcázar, or palace, includes within it parts of the old Islamic palaces. As it exists today it is mainly the product of building campaigns carried out during the rule of the Christian ruler Pedro I. The Alcázar is marked by its Islamicizing visual language, which is similar to what later developed at the Alhambra during the reign of the Nasrid Emirate of Granada.
Sources:
Valencia, Rafael. 1992. "Islamic Seville: Its Political, Social and Cultural History." In The legacy of Muslim Spain, edited by S. K. Jayyusi and M. Marín. Leiden ; New York: E.J. Brill, 136-148.
----. "El espacio urbano de la Sevilla árabe." 1988. Premios de Investigacíon. Ciudad de Sevilla. 1986. Seville: Univ. of Seville, 241-93. 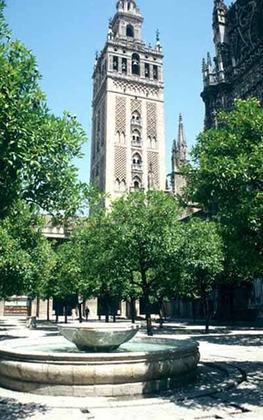 The minaret and sections of the courtyard are the most significant remains of the of the Great Mosque of Sevilla. Completed in 1198 and attributed to the architects Ahmad ibn Baso and 'Alī de Gomara, the minaret sits at the east side of the main structure. The square shape of the minaret is typical of Maghrebi minarets to this day, but while the square structure predates La Giralda, the interior design exhibits an Almohad innovation. One climbs to the top of the minaret by a rectilinear-section ramp like that in the Kutubīyah Mosque in Marrakech and the unfinished Hassān Tower in Rabat.

The minaret became a bell tower after the mosque was converted into a cathedral in the 13th c. Like the rest of the structure, it was damaged subsequently rebuilt by in the 1355 earthquake by the architect Hernán Ruiz II.

It is one of the most distinctive architectural elements of Seville, and it continues to figure prominently in the city's iconography.