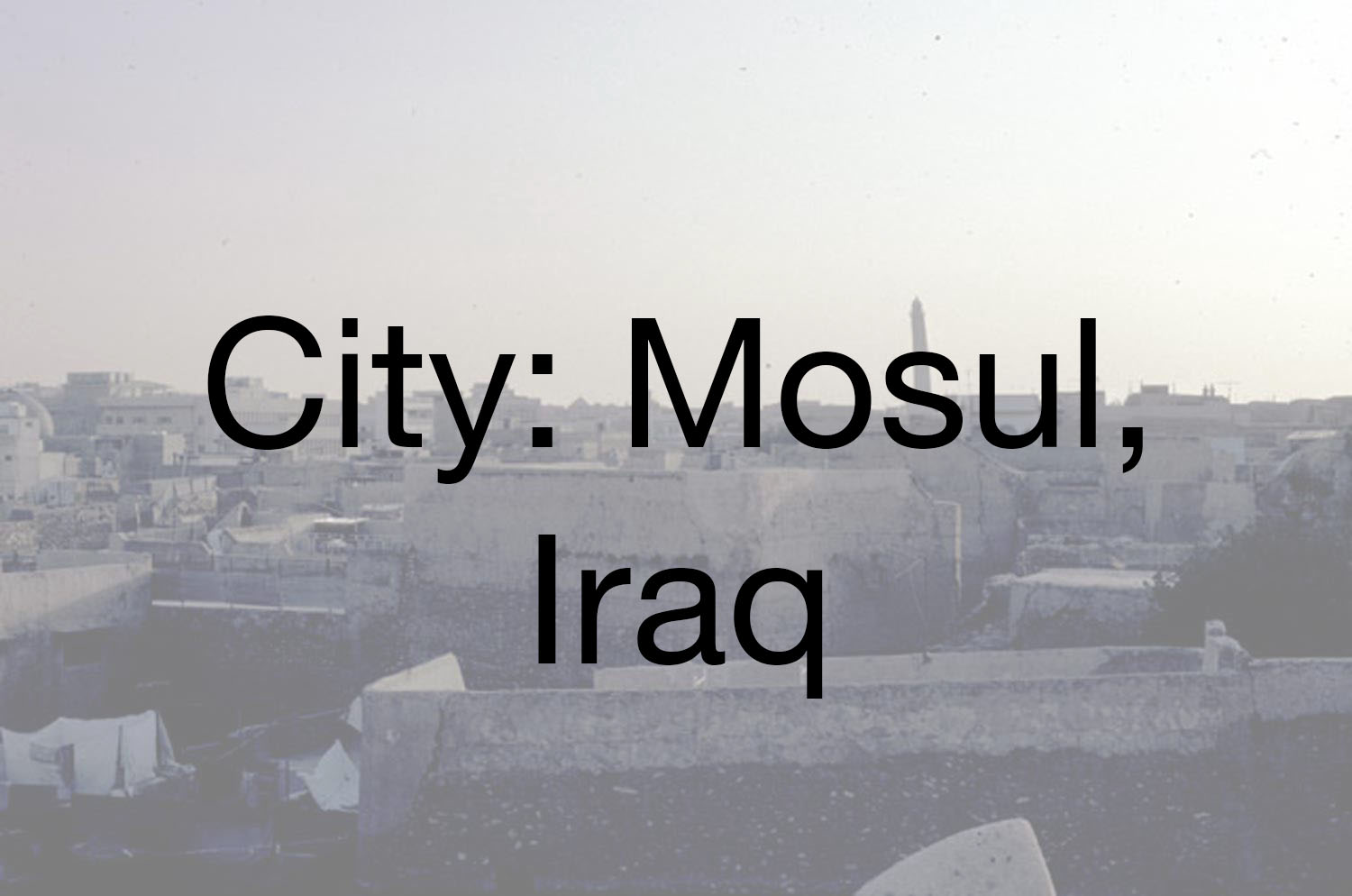 Mosul is Iraq's third largest city, with approximately 665,000 inhabitants as of 1987. It is situated close to 400 kilometers north of Baghdad on the west bank of Tigris, in the Diar Rabi'a region, close to the ruined Assyrian city of Nineveh. Though the population of Mosul is principally Kurdish, Mosul is home to other minority groups, including Aramaic-speaking Christian Assyrians, and to a lesser extent, Turcomans. The city has been described as 'the pearl of the north.' Once a walled city, remains of the original fortifications still stand along the Bash Tapia castle, on the western bank of the Tigris.
Mosul is the only major city east of Euphrates built primarily of stone and brick. It includes an extensive use of marble, especially in columns, door and window frames. Specialized masonry techniques, like the carving on marble with bitumen filling, were introduced to the city from Damascus during the reign of Nur al-Din. Its buildings and monuments were partially built with re-used elements from Roman temples and early Christian churches. In approximately 850 BCE, King Assubanipal II of Assyria chose the city of Nimrud to establish his capital, where present day Mosul is located. Around 700 BCE, King Sennacherib made Nineveh the new capital of Assyria. Mosul later succeeded Nineveh as the Tigris bridgehead of the road that linked Syria and Anatolia with Persia. By the eighth century, Mosul had become the principal city of northern Mesopotamia.
The city was an important trade center in the Abbasid era, because of its strategic position on the caravan route between India, Persia and the Mediterranean. In 1127, Mosul became the capital of the Zangid dynasty until 1224, when it was sacked by the newly prominent local Badr al-Din Lu'lu'. During Badr al-Din Lu'lu''s reign, the city reached its apogee, and was widely known for its textile and metalwork. The city is also recognized for its abundance of shrines, dedicated to religious figures like Jonah, St. Georges, and several Shi'ite Imams. A distinguishing feature of these shrines is the dome, which appears a simple, conical or pyramidal form from the outside, but reveal exquisite muqarnas ornamentation from the inside. These forms spread beyond shrines, and were adopted by many local churches. Several decorative patterns and techniques that formed in Mosul also spread into the greater Muslim world, including brick decoration, and marble mosaic work.
In the thirteenth century, Mosul was nearly destroyed by Mongol invasion. It was not until 1534, when the Ottomans took control over Mosul, that the city was rebuilt, and transformed into the region's commercial and administrative center. Mosul declined after the opening of the Suez Canal, but was revived with the discovery and development of petroleum reserves in the area in the 1920s.
Sources:
al-Janabi, Tariq Jawad. Studies in Medieval Iraqi Architecture. Baghdad : Ministry of Culture and Information, State Organization of Antiquities and Heritage, 1982.
Ettinghausen, Richard and Oleg Grabar. The Art and Architecture of Islam. New Haven : Yale University Press, 1994.
Architecture of the Islamic World, Edited by George Michell. London : Thames and Hudson, 1978.
Bosworth, Clifford Edmond. The New Islamic Dynasties. New York : Columbia University Press, 1996.
Al-Tabbaa, Yasser Ahmad. The Architectural Patronage of Nur al-Din, (1146-1174). New York : New York University, University Microfilms International, 1982. 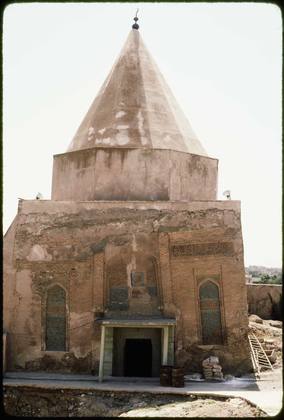 Share
Mashhad Imam Yahya ibn al-Qasim was built in 1239 by Badr al-Din Lu'lu', the Atabeg ruler of Mosul who was sympathetic to Shi'ism. The mausoleum is dedicated to a descendant of Ali ibn Abi Talib through his son Hasan called Yahya ibn al-Qasim, as is stated on a wooden cenotaph that was commissioned along with the building and inscribed in Arabic.1
The mausoleum was situated on the Tigris riverbank, in the vicinity of the citadel, some 200 meters south of the fortification known as Bash Tabiya. Because of erosion and its proximity to the river, the east façade was covered by two heavy buttresses that prevent the structure from falling into the Tigris.
The plan of the building consisted of a square base made of baked bricks topped by a pyramidal roof raised on an octagonal drum, with an inner muquarnas dome. The muqarnas was based on a cross-shaped plan. The entrance was on the north side of the cube and at one point was covered with a porch. This entrance led onto the tomb chamber. Its plan is similar to the roughly contemporary Shrine of Imam 'Awn al-Din, also constructed by Badr al-Din Lu'lu' in Mosul. Like Imam 'Awn al-Din, Imam Yahya ibn al-Qasim has a mihrab situated at the southwest corner of the tomb because the building is not oriented towards Mecca. It is made of two plaques that join at the corner (one on the south and one on the west wall) and features a hanging lamp within an arch framed by an inscription band.
Both interior and exterior of the building were enriched with architectural decoration. The main portal on the north facade was flanked by two decorative niches filled with geometric ornament made of brick and glazed tile. Another niche-shaped panel with geometric decoration surmounted the entrance portal. The niches flanking the door contained turquoise bricks forming interlocking stars and octagons, and had kufic inscriptive panels below the crowning arch. There were similar niches on the west and south facades, placed on either side of a window.
The interior walls were decorated with brickwork and terracotta panels with geometric ornament arranged symmetrically. At the dado level, an inscription band and vegetal frieze ran around the length of the square chamber. The frieze is comprised of flowers and leaves carved in high relief. The inscription band was created by carving out the letters and inlaying them with a white gypsum paste. There is another inscription band below the dome.
The shrine was reported destroyed as of July 2014.
Notes:
1. Sarre and Herzfeld, Archäologische Reise, 2: 250. The text of the inscription reads:
هذا قبر يحيى بن القسم بن الحسن بن على بن ابى طالب صلواة الله عليهم اجمعين تطوع بعمله العبد الفقير الراجى رحمته لؤلؤ بن عبد الله ولى آل محمد سنة سبع وثلثين وستمائة
Sources:
Bosworth, Clifford Edmond. The New Islamic Dynasties, 190-191. New York: Columbia University Press, 1996.
Jones, Christopher. "August in Iraq: More Destruction, Humanitarian Catastrophes." Gates of Nineveh blog, August 14, 2014. Accessed June 30, 2015. https://gatesofnineveh.wordpress.com/2014/08/14/august-in-iraq-more-destruction-humanitarian-catastrophes/.
Mamoun, Abdelhak. "URGENT: ISIL destroys 14th century Islamic shrine located west of Mosul." Iraqi News, July 23, 2014. Accessed June 30, 2015. http://www.iraqinews.com/features/urgent-isil-destroys-1400-year-old-mosque-located-west-mosul/.
Sarre, Friedrich and Ernst Herzfeld. Archäologische Reise im Euphrat- und Tigris-Gebiet. 4 vols. Berlin: D. Reimer, 1911-1920.
Uluçam, Abdüsselam. Irak'taki Türk Mimari Eserleri, 134-136; 416-420. Ankara: Kültür Bakanligi, 1989.