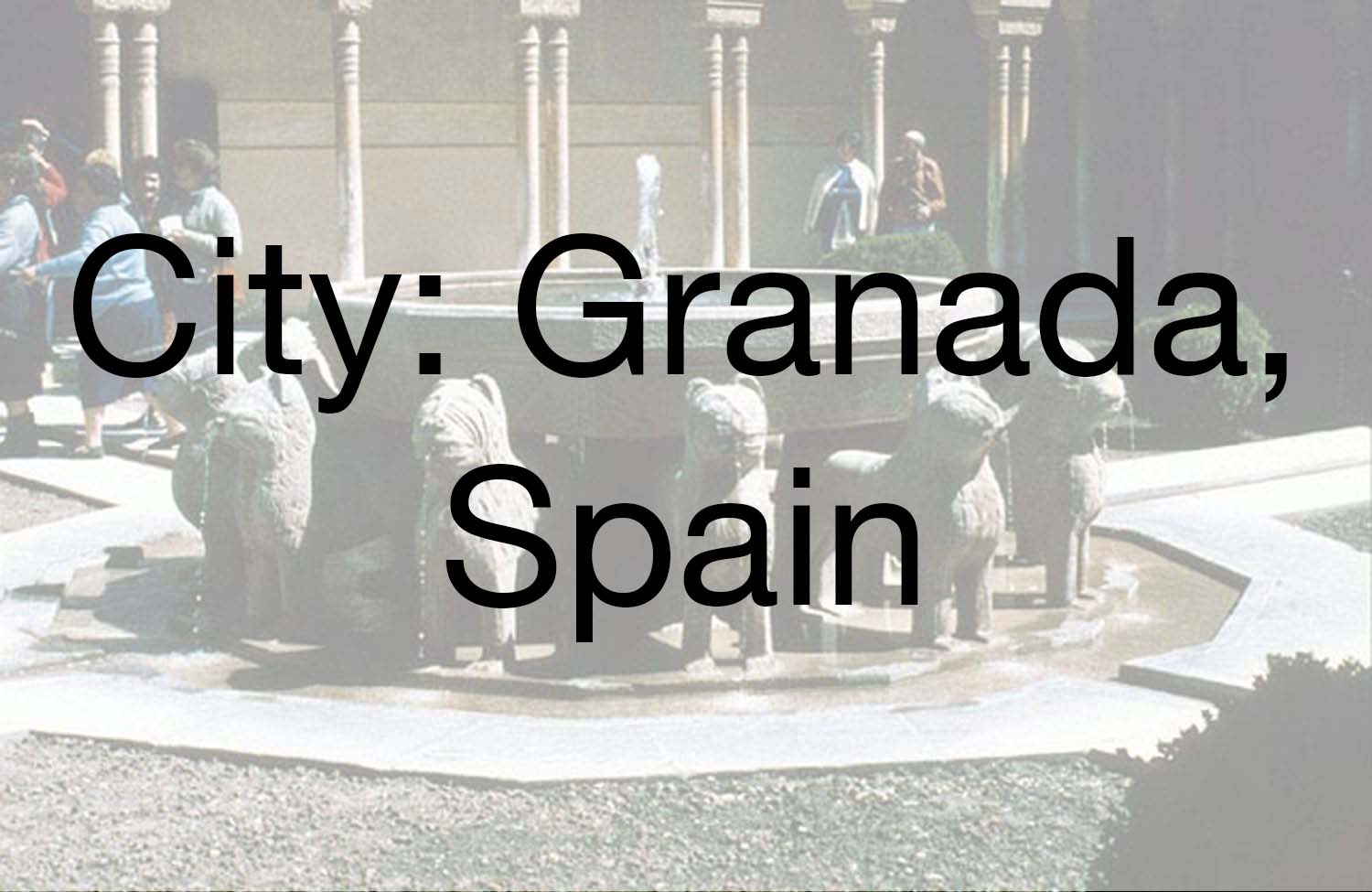 The city of Granada is located near the southern tip of Spain, on the hills at the foot of the Sierra Nevada mountain range. An important city during the period of Umayyad rule (756-1031 AD) and under the Almohad and Almoravid dynasties of the twelfth and thirteenth-centuries, Granada is most famous for the palaces within the palatine city of the Alhambra.
Founded by Muhammad ibn Yusuf ibn Nasr, who escaped to Granada after the Castilian conquest of his native Zaragoza, Granada was the capital of the Nasrid Sultanate, and as such became the last Islamic kingdom of the Iberian Peninsula following the Castilian conquest of al-Andalus in the thirteenth-century. The medieval city was composed of separate quarters, each with its own mosques and baths. Granada's suburbs developed along the banks of the Darro River, on the plain and hills below the Alhambra. The government functions of the Nasrid rulers were concentrated in the Alhambra, while commercial, religious, and civic institutions were concentrated in Granada proper.
The Albaicín, a walled suburb on the hill opposite that of the Alhambra, is the best-preserved section of the medieval city, but retains only a fraction of the mosques and celebrated courtyard houses that once existed there.
Sources:
Dickie, James. 1992. "Granada: A Case Study of Arab Urbanism in Muslim Spain." In The Legacy of Muslim Spain, edited by S. K. Jayyusi and M. Marín. Leiden ; New York: E.J. Brill, 88-111.
Hermann, Elizabeth Dean. 1996. Urban formation and landscape: symbol and agent of social, political and environmental change in fifteenth-century Nasrid Granada. Harvard Univ.: PhD. Dissertation.
"Gharnata." In Encyclopedia of Islam. 2nd ed.
"Nasrids." In Encyclopedia of Islam. 2nd ed.
Roca Roumens, M., Moreno Onorato, M. A. & Lizcano Prestel, R. 1988. El Albaicín y los orígenes de la ciudad de Granada. Granada: Universidad de Granada. 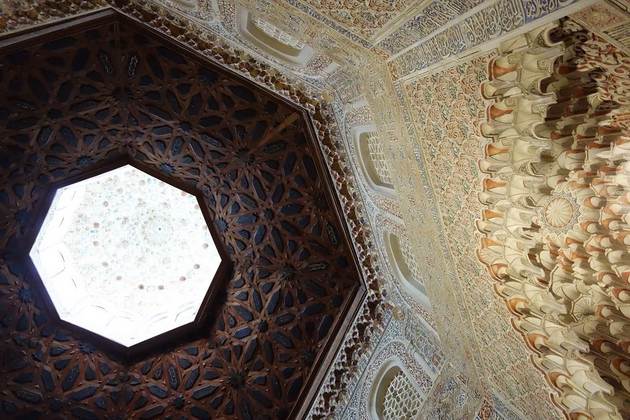 Share
In the first half of the fourteenth century, the Nasrid Sultan Yusuf I ordered the construction of a madrasa next to Granada's congregational mosque. Fragments from the original façade are preserved in the Museo Arqueológico y Etnológico de Granada, including an inscription, which states that the building was dedicated in the month of Muhurram in 750 (March or April 1349). It is also mentioned in texts written by Ibn al-Khatib.

The only surviving part of the school is the prayer room. It is a square-shaped room oriented by its mihrab. Carved, polychrome plaster covers the upper portions of the walls and doorjamb. Calligraphy consistent in style and content with other Nasrid monuments is an integral part of the decoration. Muqarnas in the four corners of the room form an upward transition into an octagonal drum that has sixteen windows with pierced screens. Above the prayer room is an octagonal wooden ceiling with interlaced star shapes, open in the center and topped by a smaller octagonal drum with sixteen windows and a plaster-decorated ceiling. (Segments of the ceiling have been modified during restoration.)

In 1500, the madrasa was converted to serve as the Christian-controlled city's Casa del Cabildo (town hall). The entire building was thoroughly renovated and altered between 1722 and 1729, when it was given a baroque facade. Today, no longer the town hall, it is referred to as the Palacio de la Madraza or the Ayuntamiento Viejo.