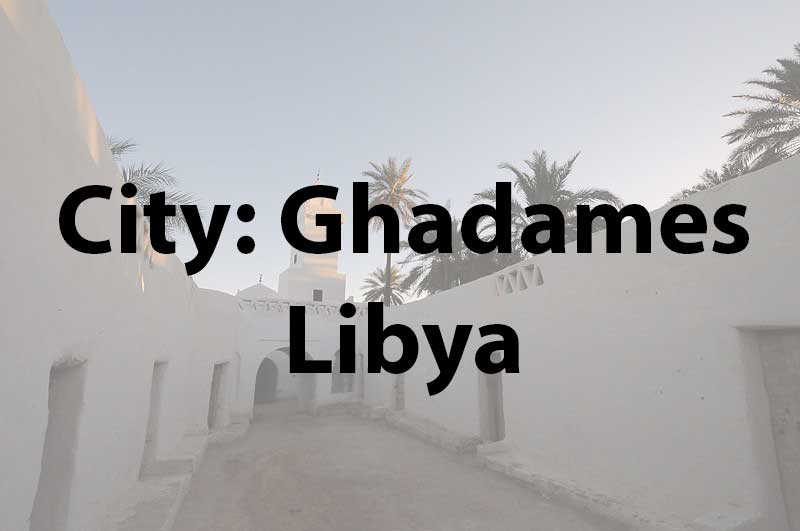 Ghadames is an oasis on the edge of the Sahara Desert in southwestern Libya at the border with Algeria and Tunisia. It is a traditional settlement of 1,300 houses and enclosed farms on an important trade route from central Africa to the Mediterranean coast.
Archaeological evidence shows occupation of the area in the Paleolithic and Neolithic eras. The origin of the city's name is disputed.  A founding legend holds that travelers camped in the valley one night, and upon packing up the next day discovered their food container was missing. One of the party remembered it had been left at lunch the previous day. He rode back to the spot, whereupon his horse dug in the ground and unearthed a spring. The spring, the main source of water for much of Ghadames' history, is still called Ain al-Faras (horse spring). "Ghadames" is said to be a corruption of the Arabic غداء الأمس (ghada' al'ams) meaning "yesterday's lunch."
Given the fact that the area was inhabited long before the Arab conquest, it is more likely that the name is a derived from the name of the Roman garrison of Cydemus, established nearby in 19 BC. When the Romans departed the area fell under Byzantine rule. In 667 Arab forces led by Uqba Ibn Nefi conquered the oasis on their way to Tunisia. Ghadames suffered less at the hand of invaders than it has from the change in trade routes and traded goods. Once a center of trade in precious metals and slaves, Ghadames' fortunes declined as slavery was abolished in Europe and ship-borne trade around Africa took over from the land route through the oasis.
Ghadames has a harsh climate, but the architecture and settlement pattern of the old city are designed to handle summer's heat and winter's cold. The houses are built of local mud brick, limestone, palm wood and lime, with thick walls, which retain heat in the winter and keep the interiors cool in the summer. The roofs of the houses are interconnected, and many of the streets are covered, allowing for increased shade, privacy, and security. During the day, only men are allowed in the streets, while the women can move about freely among the rooftops. The houses are planned so that private spaces remain just that; a stray glance into a doorway will not compromise the privacy of the family.
Today the oasis survives on farming and tourism. The farms are integrated with the houses at the oasis, and form a cohesive unit of agriculture and settlement. The plots of land are divided by walls and narrow lanes. The water used in irrigation flows in channels along the center of the lanes or the tops of the walls. In 1986 it was inscribed on the list of UNESCO World Heritage Sites.
Because of the civil conflict in Libya, UNESCO placed the Old Town of Ghadames to the World Heritage in Danger List, along with other sites in the country. But while Ghadames has generally escaped direct damage from the fighting, a 2018 ASOR report documents the collapse of multiple buildings due to heavy rains and neglect.
Sources:
Abdulac, Samir. 1998. Rehabilitation of the old city of Ghadames. Paris: UNESCO, 69.
Bettaieb, Salah. 1997. Ghadames: la porte du desert. Tunis: Alif, 95.
McLachlan, Anne & Keith. 1997. Tunisia Handbook with Libya. Bath: Footprint, 480.
Penacho, Susan, Jamie O’Connell, and Will Reynolds. 2018. “UPDATE: Ghadames. The Collapse of Buildings at Ghadames”. ASOR Cultural Heritage Initiatives. January 1, 2018. https://perma.cc/9VDB-7PS2 https://www.asor-syrianheritage.org/update-ghadames/.
Shawesh, Abubaker Mohamed. 1995. Traditional Settlement in the Oasis of Ghadames in the Libyan Arab Jamahiriya. Libyan Studies 26. 35-47.
UNESCO World Heritage Centre. n.d. “Old Town Of Ghadamès”. Accessed August 2, 2019. https://web.archive.org/web/20190802233700/http://whc.unesco.org/en/list/362/. 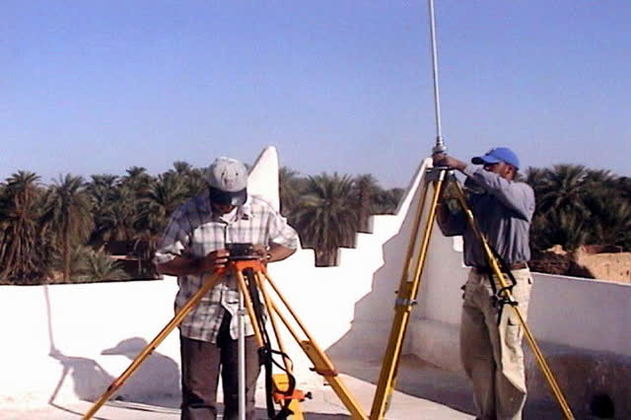 Share
Rehabilitation of a desert oasis in a UNESCO registered World Heritage site. The project involved the rebuilding of private houses by local residents, renovating water works, revitalising agriculture, and improving tourist services. Local building materials, such as hard limestone, adobe blocks and mortar, branches and leaves, and red and black soil, were used during construction. In addition to improving the community's quality of life, the project aimed at preserving cultural traditions and local knowledge, whilst at the same time promoting tourism and economic diversification.