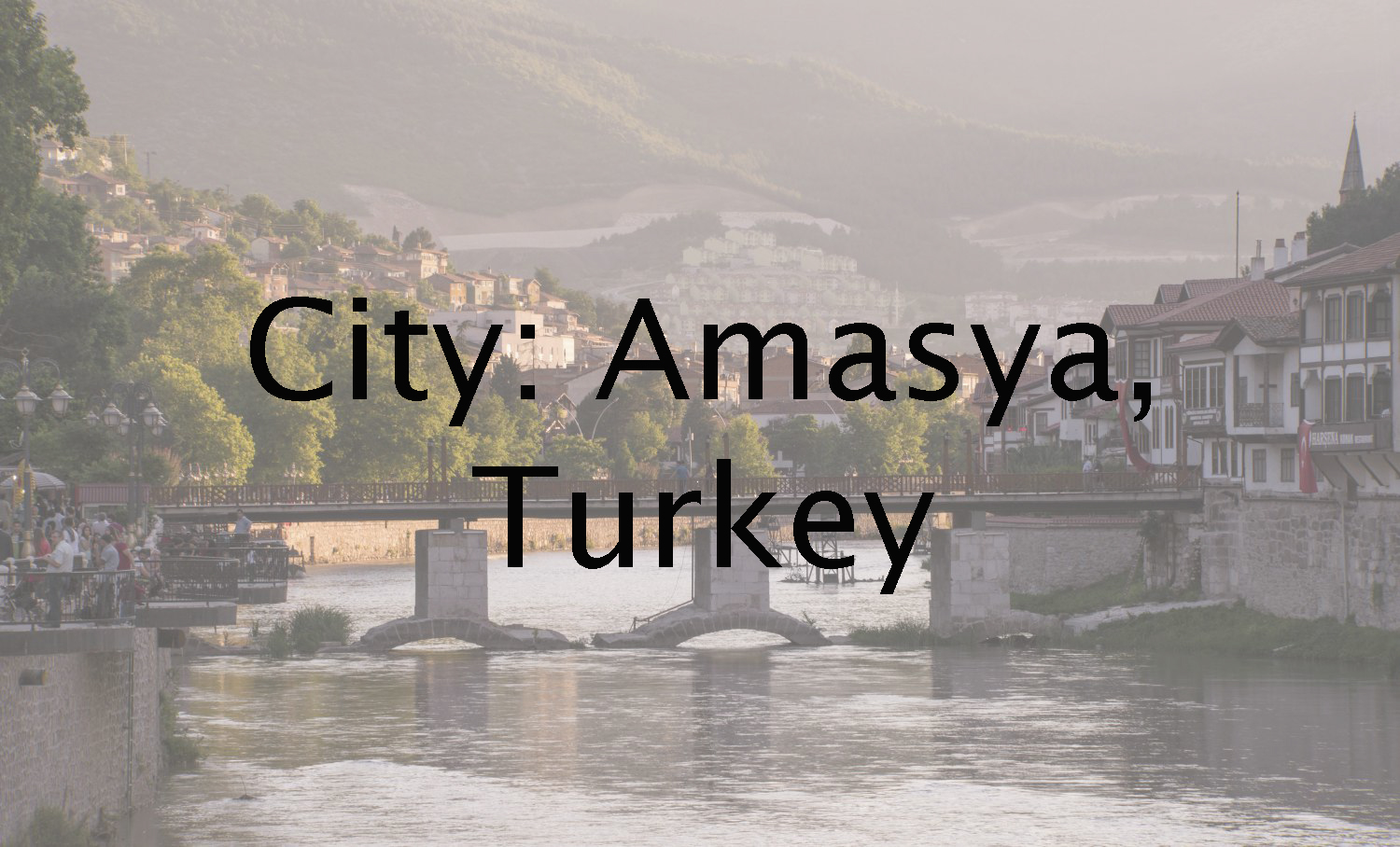 Amasya is a small city in the Anatolian portion of the modern nation of Turkey and it serves as the capital of a Turkish province (il) of the same name. It is situated in north-central Anatolia within a deep gorge carved by the Yeşilırmak (Green River, known in Greek as Iris) as it flows northeast through the Pontic Mountains toward its mouth on the Black Sea. The gorge is hemmed in on the north by Harşena Dağı (Mount Harshena) and on the south by Farhad Dağı (Mount Farhad).
Its naturally fortified location along trade routes leading from central Anatolia to the Black Sea made Amasya an excellent candidate for habitation, and its history as a town thus must stretch back into remote antiquity.1 Its name is first recorded in Greek texts as Amáseia, from which its modern name derives. From the end of the fourth century to the middle of the first century BCE, the city was the seat of the Hellenistic Kings of Pontus, whose tombs are cut into the southern face of Harşena Dağı and still look over the city today. During the period of Roman and Byzantine rule the town was an important regional center and had a thriving Christian population, which remained intact for some time after the Muslim conquest.
Amasya's history under Muslim rule began in the 1080s/470s AH when it was conquered by the Turkmen amir Danishmand Ghazi (d. 1104/497 AH). The city remained under Danishmandid rule until the early twelfth century when it fell to the Seljuqs of Rum. After the defeat of the Rum Seljuqs by invading Mongol armies in 1243/641 AH, Amasya remained under Seljuq control for several decades, but by the end of the thirteenth/seventh century AH it had passed into the hands of Ilkhanid governors. In 1352/783, Amasya was annexed into the northeastern Anatolian principality of Eretna b. Ja'far (r. 1336-1352/736-753 AH), a commander of Uyghur origin who had served under the Ilkhanid governors of Anatolia. It remained under Eretnid rule until 1389/791 AH, when it was captured by the Ottoman sultan Bayezid I and remained under Ottoman rule until the early twentieth century and the foundation of the modern Turkish nation-state.
The shift in power from Christian to Muslim rule resulted in some significant changes to the shape of the city. The citadel atop Mount Harşena to the north was simply rebuilt, and the new Muslim rulers converted the largest Byzantine church on the south bank of the Yeşilırmak to a mosque, known as Fethiyye Camii (Jami' al-Fathiyya or "Mosque of Victorious Conquest"). The Seljuqs added a number of monuments, however, including the Burmalı Minare Camii as well as madrasas, bath houses, and a palace. A revolt in 1240 led by a dervish named Baba Rasul resulted in further conversions of churches to mosques and madrasas (probably including the Gök Madrasa), effectively decentralizing the city from a classical model centered on cathedral and market into neighborhoods clustered around religious institutions.2 During the Ilkhanid period, the city received one of its most important monuments: a Bimarhane (Hospital), which still stands today.
The Ottoman sultans favored Amasya for its natural beauty and climate, and the period saw further changes to the urban fabric through the construction of several large monuments in the historic town center. Among the notable Ottoman institutions are the Büyük Ağa Madrasa, famous for its octagonal plan, a bedestan (covered market), and several mosques. The most dramatic was the Complex of Bayezid II, which included a grand mosque, madrasa, library and public soup kitchen. It transformed the town center into a green space replete with public services.
Notes:
Sources:
Gabriel, Albert. Monuments Turcs d’Anatolie. 2 vols. Paris: E. de Boccard, 1931-1934.
Goodwin, Godfrey. A History of Ottoman Architecture. London: Thames and Hudson, 1971.
Sinclair, T., David Braund, R. Talbert, Johan Åhlfeldt, Jeffrey Becker, W. Röllig, Tom Elliott, H. Kopp, DARMC, Sean Gillies, B. Siewert-Mayer, Diane Braund, Francis Deblauwe and Eric Kansa. "Amaseia: a Pleiades place resource." Pleiades: A Gazetteer of Past Places, 2016. https://pleiades.stoa.org/places/857018
Taeschner, Franz and Klaus Kreiser. “Amasya.” Encyclopedia of Islam, THREE, 2012. http://dx.doi.org/10.1163/1573-3912_ei3_COM_23756
Wolper, Ethel Sara. Cities and Saints: Sufism and the Transformation of Urban Space in Medieval Anatolia, 55-59. University Park: Pennsylvania State University Press, 2003. 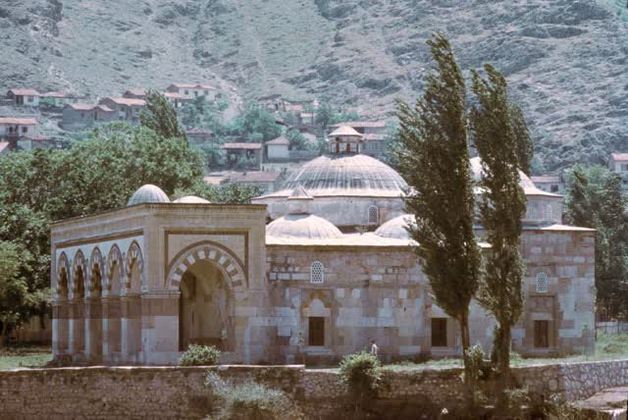 Share
The mosque was built during the mayoralty of Bayezid Paşa in Amasya in 1414/817 AH, prior to his appointment as grand vizier by Mehmed I (r. 1403-1421). The pasha acquired a large number of windmills, agricultural land, gardens, stores and public baths in the area to provide income for the religious endowment or waqf (vakif) responsible for the operation and maintenance of the mosque.
Oriented 10 degrees to the east of south, the mosque consists of five-bay portico and a central hall flanked by rooms to the east and west and a qibla iwan projecting south. The portico is domed with square columns; the inner surface of each dome features a different decoration including two swirls and a sixteen-sided star. There are two ornamental basins carved into the portico floor. The entryway is set in a tall vaulted vestibule and crowned with an elaborate muqarnas. Balconies connected to the upper-level rooms open onto this vestibule and onto the portico façade protected with carved wooden balustrades. The foundation plaque is in Arabic and wraps around the entryway. The name of the architect or builder, Ebu Bekir bin Mehmed Museymes of Aleppo, is found next to the foundation plaque and above the western portico arch. The names of architect Yakub b. Abdullah and builder Zeyneddin b. Zekeriyya, are inscribed on the central portico piers in association with the 1419/822 AH repair. A later plaque, found on the qibla wall, commemorates the 1887-88 restoration.
Inside, the domed central hall gives access to six rooms: four large rooms to the east and west and two narrow cells flanking the entrance. The large rooms, once used by dervishes, are equipped with plaster furnaces and shelving. They are domed, with two small lanterns atop the two northern domes. A staircase placed between the two western rooms leads up to two rooms along the portico wall and to the minaret, which rose above the portico. It also gives access to latrines at the basement level, a feature unique to this mosque.
The central hall is extended with a smaller iwan to the south, separated by a grand arch. The iwan dome is carried on muqarnas pendentives and sits slightly lower than the central hall dome, which is crowned with a lantern. There are eight windows - some blind - on each dome, although light comes in primarily from the fourteen windows pierced into the iwan walls. The mihrab is raised on a marble podium and sits at the center of a large stone frame filled with geometric carvings. A carved panel with interlocking stars and dodecagons adorns the mihrab niche, which is crowned by a muqarnas vault and flanked by two bulbous columns of red and green stone. The plastered interior is plain with the exception of stone cornices and shallow decorative archways carved into the walls.
The decorative effort on the exterior is focused on the portico. The portico arches, assembled of red and white marble voussoirs, are framed with a dark red stone band carved with arabesques. A second band of red stone is inscribed with a list (vakfiye) of the properties endowed to the mosque. It is topped by a thick band of interlocking stars and octagons and a muqarnas cornice. A cornice of green stone envelops the building above the casement level, separating limestone (küfeki) construction from alternating rows of limestone and brick above. A saw-tooth brick cornice caps the walls and the drums of domes. The four original windowpanes inside the mosque, and the walnut mosque door are valuable examples of period woodworking.
The charitable soup kitchen (imaret) and guesthouse were replaced by modern buildings of the adjoining military zone, which has incorporated a large part of the historic cemetery into its grounds. Only a part of the spiral stairs remains from the original minaret.
Sources: