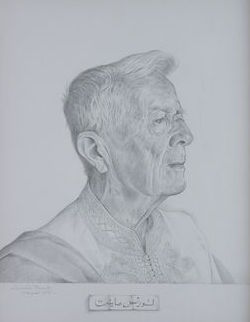 The American Composer, writer, translator, and musicologist Paul Frederick Bowles may be best known for his connection to Morocco, a country he visited frequently beginning in the 1930s.  By 1948 he had settled permanently in the port city of Tangier.

He was born on December 30, 1910 and raised in Jamaica, Queens in New York City to a highly demanding dentist father Claude Dietz Bowles and mother Rena Winnewisser Bowles. He learned music and how to play piano at the Model School, a teacher training school, and attempted to compose his first opera when he was only nine years-old. His interest in writing was nurtured by an aunt who lived in Greenwich Village and introduced him to the head children's librarian of the New York Public Library. At Jamaica High School in Queens he joined the school’s monthly literary magazine. In 1928, at the age of 18, Bowles had his first poem published in Transition, a prestigious avant-garde literary publication.
Upon graduating he left to study at the University of Virginia, but he quickly left for Paris without even notifying his parents.  His parents eventually persuaded him to return to the United States, and to finish out his first year of college, which he did in the spring of 1930. He soon returned to Paris, however.  He also traveled to Germany, Spain, and Sri Lanka.
In the summer of 1931 he met Aaron Copland and Virgil Thomson who became his mentors.  He soon became a sought after composer, writing music for more than 30 films and theatrical productions throughout his career. He worked with Orson Welles, John Houseman, William Saroyan, and Tennessee Williams, among others.
On February 21, 1938 he married the novelist and playwright Jane Bowles. They remained together until her death at a hospital in Malaga, Spain. Paul Bowles first visited Tangier in the 1930s at the suggestion of Gertrude Stein. In 1948 he moved there permanently and lived there until his death in 1999.
He published his first novel, The Sheltering Sky, in 1949.  Approximately 4 decades later it was made into a movie by Bernardo Bertolucci.   By the time of his death he published 4 novels, sixty short stories, many travel pieces, and two autobiographical works.
He also translated a number of Moroccan and Latin American writers, and played a major role in establishing the reputations of Mohammed Mrabet, Mohammed Choukri,  among others.  According to the obituary by Mel Gussow, in the New York Times, in the 1950s and 60s Bowles became a magnet for those envisioning the artist's life away from the mainstream. It is not surprising that he was idolized by writers of the Beat Generation, many of whom visited him in Tangier.
As a composer, Bowles composed inciental music for the Tennessee Williams plays The Glass Menagerie and Sweet Birth of Youth.  He also composed the scores for many films, working with great directors such as Orsan Wells, Elia Kazan, and Salvador Dali.  He also scored productions staged by the American School of Tangier.  As an ethnomusicologist Bowles received Guggenheim and Rockefeller grants to research music Spain, North Africa, the Antilles, and South and Central America. In 1959, and between 1960-1962 Rockefeller Grants were used for a special project sponsored by the Library of Congress to capture the music and dance of Morocco. 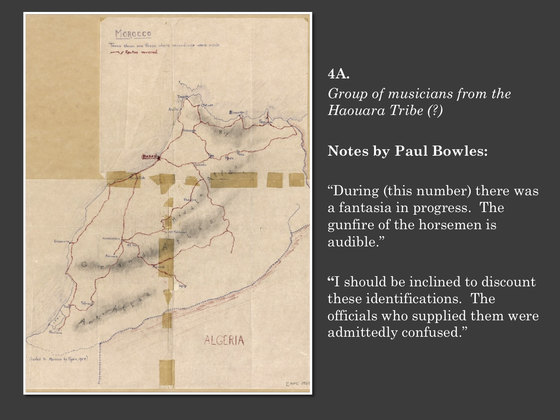 Title
4A. Group of musicians from the Haouara Tribe
Year
1959 August 2; Video 2015
Description

“During (this number) there was a fantasia in progress.  The gunfire of the horsemen is audible.

I should be inclined to discount these identifications.  The officials who supplied them were admittedly confused.”