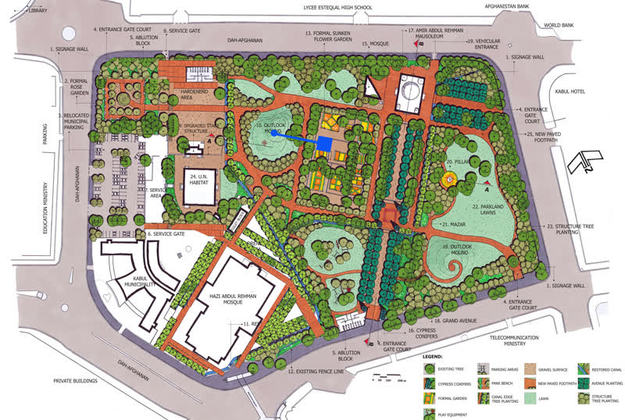 In 2006, following Kabul Municipality’s endorsement of a Rehabilitation Master Plan formulated by external consultants, the Aga Khan Trust for Culture (AKTC) began initial works on Park-e Zarnegar, the largest public green space in central Kabul. The Trust had already carried out the restoration of the Amir 'Abd al-Rahman Mausoleum in the Park in 2004.

While the park, which covers 4.6 hectares, experienced previous interventions – including the 1970s construction of a three-storey building for Kabul Municipality and the conversion of the area around the Gulistan Serai into a vehicular parking and petrol station – the historic character of the site was not significantly affected. AKTC’s interventions in 2006 focused on maintaining a balance between the historic importance of the site and the recreational needs of the general public in central Kabul, as well as addressing , g the several modern encroachments on the site. Work was also undertaken on a large mosque located south of the Municipality offices.

The Master Plan for the rehabilitation of Park-e Zarnegar, which was presented to and endorsed by Kabul Municipality in early 2005, made provision for extensive landscaping and upgrading of irrigation, as the site had become severely degraded over time. Not only were many of the mature trees in poor condition, but the park had become infested with invasive species. Moreover, irrigation channels had become blocked by waste or had become drains, which caused damage to the surrounding flora. Following the removal of dead trees and invasive flora, some 750 saplings were planted, including planes, almond and mulberries, along with 500 flowering shrubs. A significant quantity of compost-rich soil was imported into the park to improve the fertility of areas from which building rubble had been removed. A total of 4500 square meters of new turf was laid. A new deep well was sunk and linked to 900 meters of underground piping and 2,500 meters of surface channel that now enables effective irrigation across the entire park. A shallow well was fitted with a hand pump for use by the public. Following diversion of wastewater to discharge into the Kabul River, existing stone masonry channels were cleared and repaired. 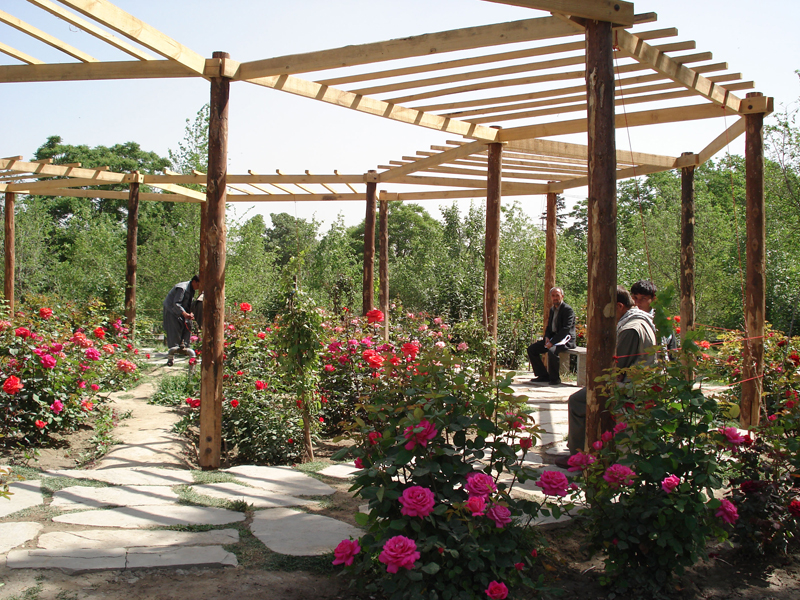