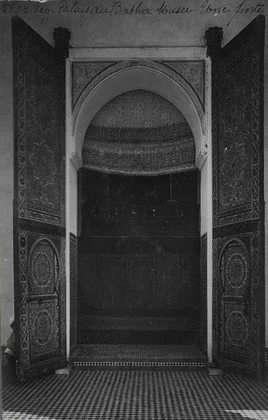 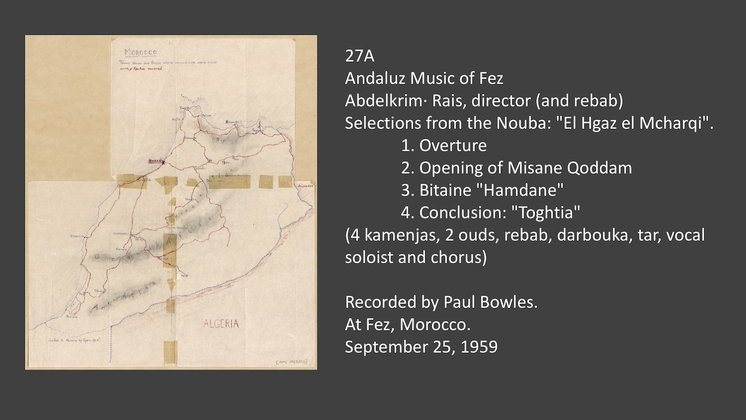 "Abdelkrim Rais recorded these selections in a room of the Musée du Batha in Fez, only after extensive arrangements made by telephone with the government in Rabat. There was an extraordinary atmosphere of secrecy and intrigue connected with the arrangements for recording Andaluz music in Fez, something which I had not met in any form until then. A special advisor had to be sent from the capital before any recordings could be made. It was he who set the prices, the hours, the places and the conditions for recording. He also specified that each time Abdelkrim's name was mentioned in print, the following words must be added: "through the courtesy of the Services des Monuments Historiques, des Arts et du Folklore, Conservatoire de Fès.

The mode in which the nouba "El Hgaz el Mcharqi" is composed is one for use at midday. Naturally, since it would take some ten or eleven hours to play through one nouba, only small parts of any given nouba are performed at one time; the most which is ever done is a complete misane. This I heard in Fez in 1931, but it is not the custom nowadays to perform anything which goes on for such a long time without a break.

As an experiment, played 26B and 27A, performed at about an hour’s  interval, simultaneously on two different tape-recorders, and was astonished to find that for long periods they sounded as one. In certain spots the tempo of 27A is slightly faster; otherwise they are identical in every respect, save of course that 26B contains only the overture and a part of the opening of the misane "Qoddam".