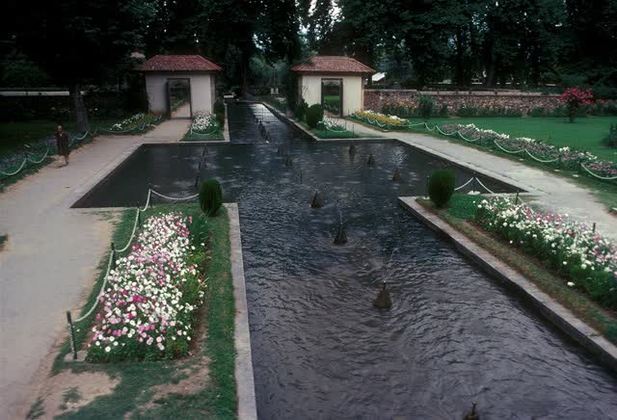 Share
Achabal Bagh is located in the town of Achabal town, about 69 kilometers southeast of Srinagar in the district of Anantnag at the southeastern end of the Kashmir Valley. The Himalayan mountains end in the Sosanwar hills, where Achabal lies. Considered one of the smaller Mughal gardens in Vale of Kashmir, the site of Achabal Bagh may have formerly been a Hindu sacred site known as "Akkshavala".

A summer retreat for the Mughals, the garden is the work of Nur Jahan, wife of the Mughal Emperor Jahangir. In addition to her interest in gardens, Nur Jahan also had a great interest in the arts. Villiers-Stuart, the author of the 1913 publication "Gardens of the Great Mughals," called Nur Jahan and Babur the "greatest garden lovers of them all."

Built c. 1620, and later remodeled between 1634-1640 by Shah Jahan's daughter Jahanara, Achabal (lit., "the places of the princes") is also called "Begamabad" after its commission by the then-reigning "Begum" (queen), Nur Jahan. The garden was known for its gushing waters, and its design is an adaptation of the traditional Persian chahar bagh (four gardens). The chahar bagh takes its inspiration from the Quranic description of heaven as having four rivers, of wine, honey, milk, and water. The traditional chahar bagh is uniformly shaped, with a water source in its center and four (chahar) radiating streams which divide the garden (bagh) into four parts.

As with other Kashmiri gardens, Achabal is located on a hillside, with its water source at the top. The typical chahar bagh design had to be altered to fit the site's topography, as the source of water shifted from the traditional center of the square garden to the highest point of the garden. In this manner, one axial stream is emphasized and the other streams were minimized or even removed from the design.

Although Achabal was once larger than it is today, its original dimensions are unknown. Today it has a rectangular shape, 247 meters long by 155 meters wide. It is aligned along the north-south axis, with the southern edge along its highest point (the site of the water source). The garden is segmented into three terraces, with a central water stream along the north-south axis that features three fountain basins. There are two walkways on either side of the axial water stream. Smaller side water channels to the east and west parallel the principal axial stream, and receive water from a stream running east-west on the third terrace. The smaller side water channels do not have fountain basins, but each channel features two chadars between the three terraces of the garden. A chadar is a special water ramp that transfers water between garden terraces; the surface of a chadar is usually treated with engraved patterns that influence the appearance of the water flowing over it.

The garden is accessed at its northern end, from the street level: one enters through two small pavilions on the first terrace. Passing the gate, the visitor finds the first pool, which has a square shape and features nine fountains. This pool receives water from the second terrace, which is accessed by two sets of stairs on either side of the axial water stream. On the second terrace, the axial water stream leads to the second pool, which is square in shape with a five-by-five array of fountains. Looking both east and west from the second terrace, another garden feature, known as a chabutra (a sitting platform particular to Indian gardens) is visible. Water entering the second pool passes under a two story baradari, or large pavilion. This baradari has three arches on its southern elevation and one along its northern elevation.

Beyond the baradari on the second terrace lies the third pool, which is rectangular in shape. In the center of this rectangle, a one-story baradari and its walkways divide the pool into two squares, each of which contains a five-by-five array of fountains. The third terrace is also the most private part of the garden; named the zenana (harem, or women's) garden, it has a rectangular water tank flanked by two small square pavilions. This water tank was used as a women's bathing pool. At this point, water from the central water spring also feeds side channels, running parallel to the axial water stream.

After falling into decay, the garden was resurrected on a smaller scale by Gulab Singh (Maharajah of Jammu and Kashmir from the late 1790s until 1857). Today, Achabal is a public garden somewhat smaller in scale than its original incarnation. 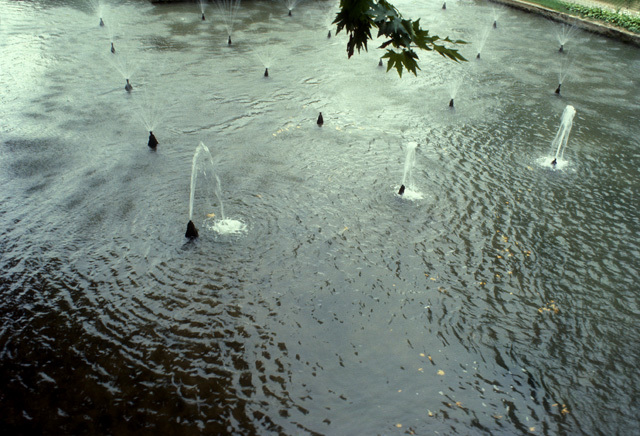