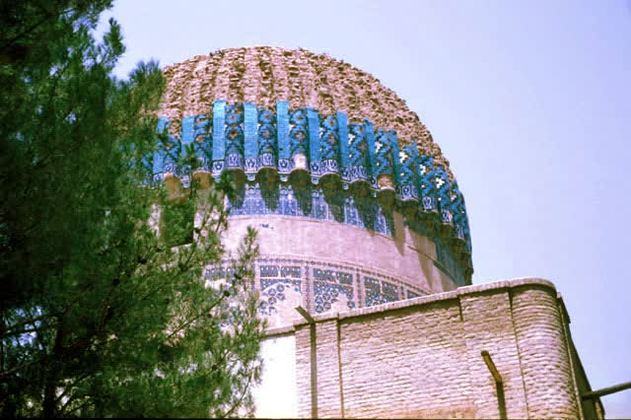 Share
Only one minaret and the founder's mausoleum remain of the Madrasa of Gawhar Shad in the Musalla Complex, which was constructed between 1417-1438 (820-841 A.H.), according to its foundation plaque, now housed in the mausoleum.

According to eyewitness accounts, the madrasa was a rectangular building centered on a courtyard, with minarets rising at its outer corners. A grand iwan at the west end of the courtyard was used as a classroom. Two tiers of student rooms enclosed the courtyard to the north and south, with small iwans at the center.

The remaining minaret, located at the southeastern corner, is known today as "Minaret #5" of the Musalla Complex. It is believed to be one of a pair that flanked the portal screen of the madrasas. It has a brick shaft covered with a diamond pattern in blue tiles, interlaced with bands of floral motifs and kufic inscriptions. There are two balconies, whose muqarnas supports remain. For several years the minaret leaned precariously and was in danger of collapse. In 2003, it was supported with cables with funds from UNESCO's "Emergency consolidation and Restoration of Monuments in Herat and Jam, Phase I and II" Project.

Completed in 1432 (835 A.H.), the Mausoleum Gawhar Shad was located in the westernmost corner of the Madrasa Gawhar Shad and now stands alone. The chamber has a cruciform plan (nine and a half meters on each side) with a five-sided qibla bay projecting southwest. Four arched niches occupy the recesses and are inscribed in four grand arches that intersect at the corners of the dome chamber. Squinches provide the transition from the four corners to an eight-pointed star, followed by an octagon and a sixteen-pointed star that circle in towards the thirty-two sided star at the vault's apex. This intricate squinch-net vault is richly decorated with painted floral motifs and inscriptions highlighted with gold.

Gawhar Shad's son Baysunghur was buried in this mausoleum a year after its completion. Seven additional Timurid princes, as well as Gawhar Shad, are believed to have been buried here; Russian agent Nicholas de Khanikoff reported seeing Gawhar Shad's tombstone when he visited the site sometime before 1860; her tombstone is currently missing. 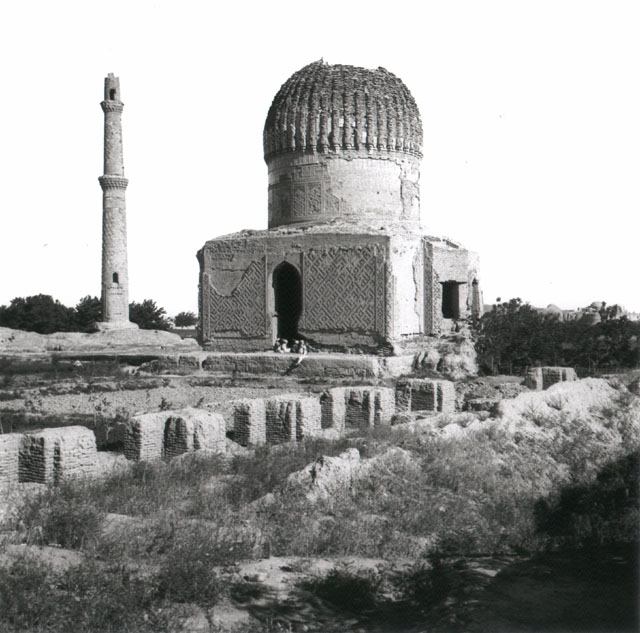