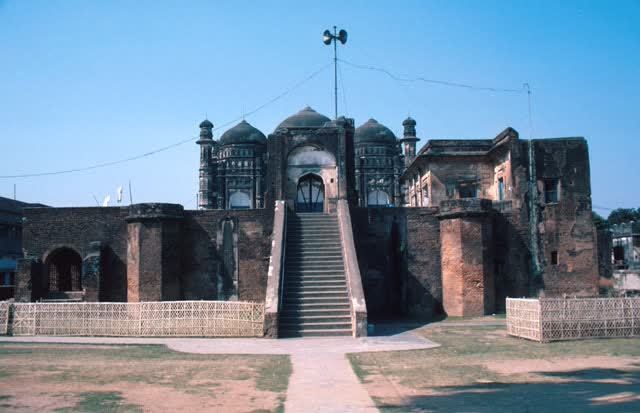 The date of the mosque can be traced back to 1704-05 AD based on the Persian inscriptions on the central archway and over the central mihrab.  It was built by a noble, Khan Muhammad Mirza, during the rule of Farrukh Siyar, the Deputy Governor of Dhaka. The mosque was probably constructed by the order of Qazi Ibadullah, the chief Qazi of Dhaka.

The mosque is located approximately 500 meters west of the Lalbagh Fort. The mosque is situated at the western part of the complex which also includes a graveyard and a garden. During its inception the mosque was probably the center of a robust neighborhood.

The Khan Mohammad Mridha Mosque represents a typical Bengali platform mosque; that is, a three-domed mosque sits on a rectangular raised platform. The platform is 16'-6" above the ground level. The tahkhana comprises of vaulted rooms for living purposes. Area wise, the mosque occupies only a small portion of the platform. In this structure the platform is square with parapets adorned with betel leaf motifs. Probably intended to be a madrasa, the large arched cells underneath the 5.8 meter- high platform were used for living purposes.  The space underneath the platform were arranged with a single bay of vaulted rooms accessed from a vaulted passageway on the periphery of all sides except east. The platform is accessed by a straight flight of stair of 25 steps on the east leading to a double arched gateway aligned with the central bay of the mosque. Two large engaged octagonal turrets were positioned symmetrically on each side of the stair. On the platform, along with the mosque an ancillary structure is positioned on the north, probably used for multiple purposes.

The mosque is a typical Bengali Mughal type where the central dome is larger than the other two.  Externally the mosque is a rectangle of 49'10" x 23'5" while internally it has an oblong plan of 39'8" x 12'8". The structure is divided into three equal interior bays, roofed over by three fluted, bulbous domes, resting on drums. The proportionately smaller lateral domes are placed on the equal size bays by splitting each dome into a half-dome and placing it on a pendentive.

The rectangular structure is buttressed by four corner octagonal turrets, capped by plastered cupolas. These turrets are rise slightly above the parapet walls and ribbed in typical Bengali fashion. Parapets are straight instead of the curvilinear cornice of pre-Mughal types. The eastern or main facade is visually divided into three sections. Each section contains an entrance doorway, flanked by its own pair of slender engaged columns. The entrances correspond to the three domes above and adorned by cusped arches. 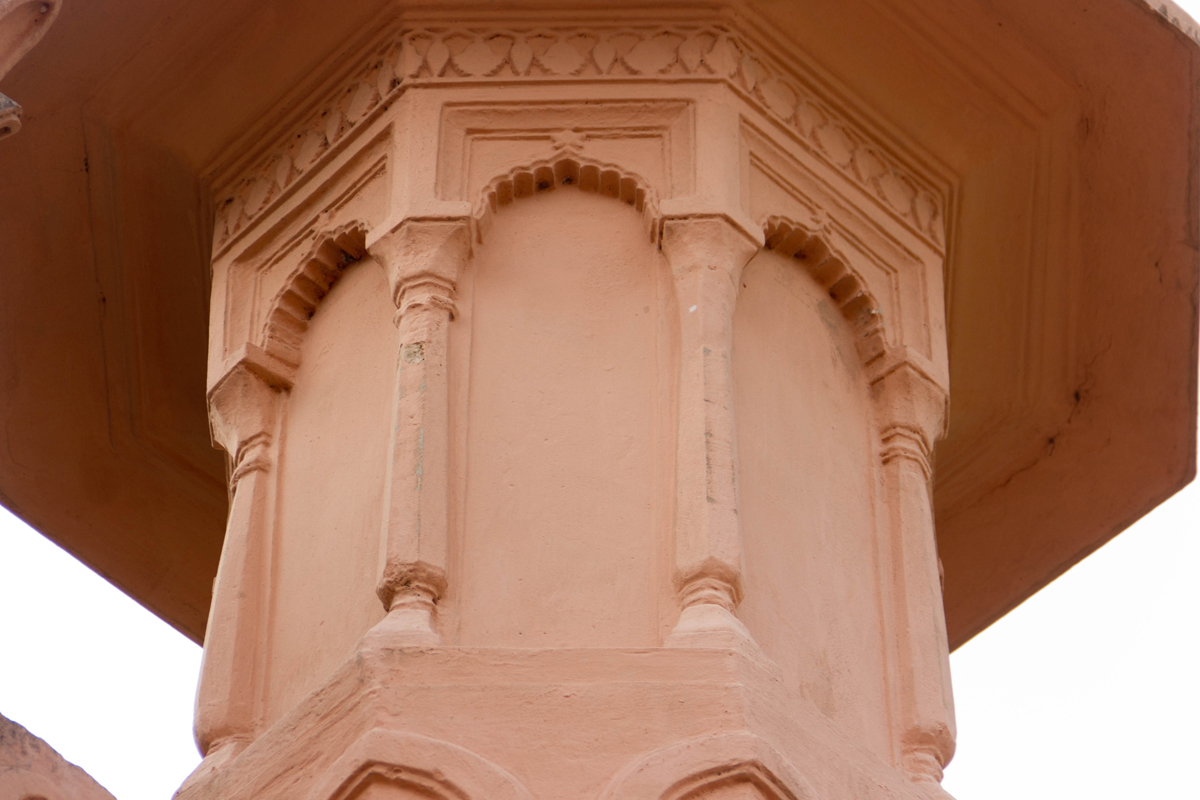