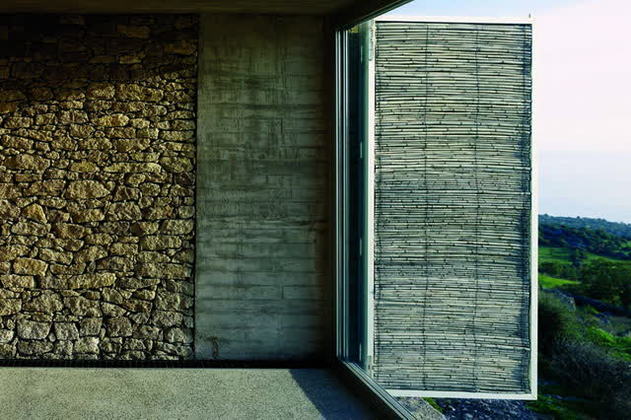 Share
Recipient of the Aga Khan Award for Architecture in 2004.
Two Turkish brothers, Selman and Süha Bilal, wanted to build a house on Turkey's north Aegean coast as a place to spend weekends in a spot where they could find beauty, tranquillity and seclusion without travelling long distances from their homes in Istanbul.

B2 House is located on the edges Büyükhüsun, a small village near Ayvacik housing a tightly knit community of around 450 people who work mainly in agriculture. Located just outside the southeast boundary of the village, the pure rectangular mass of B2 House sits on an open terraced site, unmistakably modern and separate from the traditional houses of the surrounding village, but respecting and allying itself with those houses through its use of traditional local materials and techniques. The house opens itself to the surroundings and encourages its users not only to observe the landscape but also to immerse themselves in nature through the use of semi-external and external parts of the accommodation. It is a place where a basic shelter becomes a space for the celebration and contemplation of nature.

The response of the Turkish architect, Han Tümertekin, to the sloping topography of the triangular site, which drops 7 metres from north to south, is also based on the local practice of terracing. The site is divided into two flat plateaus with a difference of 1.3 metres between them, creating a long rectangular terrace, on which the house is placed, and a triangular terrace to the back of the house, which is used as a garden. Like the local houses, B2 House is embedded in the slope of the mountainside; however, in contrast to the local building typology, there are no garden walls around B2 House. As a result, the site is absorbed by the surrounding landscape but, at the same time, the house is set apart, appearing almost as a sculpture on a pedestal.

The owners sought to contain the scale of the house in order to maintain construction costs while achieving a simple, practical structure that would not demand much maintenance. The programme is therefore basic: the ground floor is dominated by a large living room and the upper floor by two bedrooms. The connection between the two floors is through an external stair of wood and steel.

The purity of the main spaces and an integration with nature are maintained by semi-external spaces set within a 1.2 metre deep utility wall that contains bathrooms, a laundry area, storage, a kitchenette and a fireplace that opens onto an outdoor living room sheltered beneath the stair deck. All of the outdoor spaces are conceived as integral parts of the house.

The structure of the house is earthquake resistant and fairly simple, and was built with local technology and materials. The east and west façades comprise a tripartite composition consisting of two concrete structural members that frame a stone wall; this is continued on the roof, although the stones there are not fixed.

With a reduced architectural language employing humble materials and rudimentary forms, remarkable spatial conditions are achieved in B2 House. The spaces gain a sublime presence that transforms the sense of a dwelling into that of a monument. The house functions as an apparatus for perceiving nature with truly mesmerizing effects, constantly shifting the user from domestic activity to a state of pure contemplation in a suspended timeless zone. Its capacity to transport its users between different realms is extended to its image: the pure mass on a pedestal is conceived with the silent grandeur and noble simplicity of a monument, while its scale and humble materials take it back to the realm of the vernacular.

Jury Citation:
This house has been chosen to receive an Award because it embodies a sense of perfection and well-being. It represents a progressive approach in acknowledging the history of its place, the surrounding houses and landscape, to form a new and unique creation that is, at the same time, an integral part of its community. The house stands apart -- beautifully shaped and elegantly dressed -- but in the future additional houses may embrace and adopt it, fully integrating it into a wider landscape.

B2 conveys a maximum amount of dignity, achieved with a minimum of means. It celebrates the act of contemplation, looking towards the distant horizon with openness and clarity. It incorporates a wealth of architectural knowledge but at the same time expresses the individuality of the architect's aspirations.

When filled with life and activity, the house becomes a place of special significance and reference in the community, embracing all those whom it welcomes as visitors or passersby. When empty, it continues to command the respect it so much deserves. 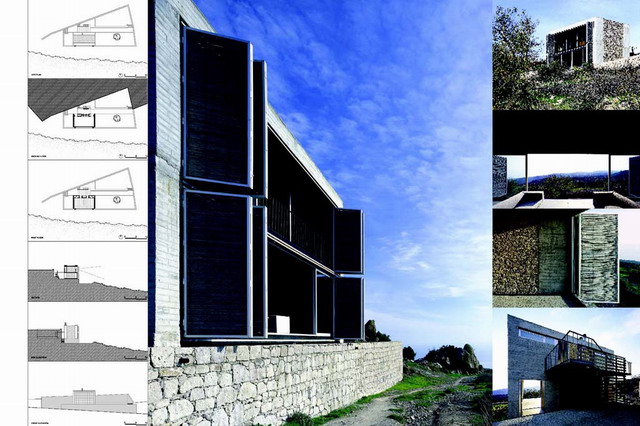