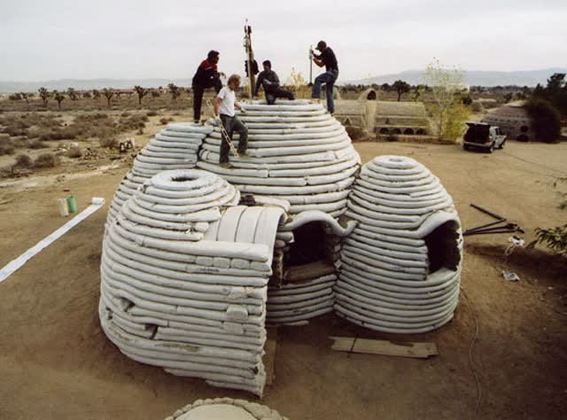 Share
Recipient of the Aga Khan Award for Architecture in 2004.
The global need for housing includes millions refugees and displaced persons – victims of natural disasters and wars. Iranian architect Nader Khalili believes that this need can be addressed only by using the potential of earth construction.

After extensive research into vernacular earth building methods in Iran, followed by detailed prototyping, he has developed the sandbag or ‘super adobe’ system. The basic construction technique involves filling sandbags with earth and laying them in courses in a circular plan. The circular courses are corbelled near the top to form a dome. Barbed wire is laid between courses to prevent the sandbags from shifting and to provide earthquake resistance. Hence the materials of war – sandbags and barbed wire – are used for peaceful ends, integrating traditional earth architecture with contemporary global safety requirements.

The system employs the timeless forms of arches, domes and vaults to create single and double-curvature shell structures that are both strong and aesthetically pleasing. While these load-bearing or compression forms refer to the ancient mud brick architecture of the Middle East, the use of barbed wire as a tensile element alludes to the portable tensile structures of nomadic cultures. The result is an extremely safe structure. The addition of barbed wire to the compression structures creates earthquake resistance; the aerodynamic form resists hurricanes; the use of sandbags aids flood resistance; and the earth itself provides insulation and fireproofing.

Several design prototypes of domes and vaults were built and tested. The system is particularly suitable for providing temporary shelter because it is cheap and allows buildings to be quickly erected by hand by the occupants themselves with a minimum of training. The shelters focus on the economic empowerment of people by participation in the creation of their own homes and communities.

Each shelter comprises one major domed space with some ancillary spaces for cooking and sanitary services. Incremental additions such as ovens and animal shelters can also be made to provide a more permanent status and the technology can also be used for both buildings and infrastructure such as roads, curbs, retaining walls and landscaping elements.

Because the structures use local resources – onsite earth and human hands – they are entirely sustainable. Men and women, old and young, can build since the maximum weight lifted is an earth-filled can to pour into the bags. Barbed wire and sandbags are supplied locally, and the stabilizer is also usually locally sourced.

Since 1982, Nader Khalili has developed and tested the super adobe prototype in California. In 1991 he founded the California Institute of Earth Art and Architecture (Cal-Earth), a non-profit research and educational organization that covers everything from construction on the moon and on Mars to housing design and development for the world’s homeless for the United Nations. Cal-Earth has focused on researching, developing and teaching the technologies of super adobe. The prototypes have not only received California building permits but have also met the requirements of the United Nations High Commissioner for Refugees (UNHCR) for emergency housing. Both the UNHCR and the United Nations Development Programme have chosen to apply the system, which they used in 1995 to provide temporary shelters for a flood of refugees coming into Iran from Iraq.

Khalili’s educational philosophy has also continued to develop. A distance-teaching programme is being tested for the live broadcast of hands-on instruction directly from Cal-Earth. Many individuals have been trained at Cal-Earth to build with these techniques and are carrying this knowledge to those in need in many countries of the world, from Mongolia to Mexico, India to the United States, and Iran, Brazil, Siberia, Chile and South Africa.

Jury Citation:
These shelters serve as a prototype for temporary housing using extremely inexpensive means to provide safe homes that can be built quickly and have the high insulation values necessary in arid climates. Their curved form was devised in response to seismic conditions, ingeniously using sand or earth as raw materials, since their flexibility allows the construction of single- and double-curvature compression shells that can withstand lateral seismic forces.

The prototype is a symbiosis of tradition and technology. It employs vernacular forms, integrating load-bearing and tensile structures, but provides a remarkable degree of strength and durability for this type of construction, which is traditionally weak and fragile, through a composite system of sandbags and barbed wire. Created by packing local earth into bags, which are then stacked vertically, the structures are not external systems applied to a territory, but instead grow out of their context, recycling available resources for the provision of housing. The sustainability of this approach is further strengthened because the construction of the sandbag shelters does not require external intervention but can be built by the occupants themselves with minimal training. The system is also highly flexible: the scale of structures and arrangement of clusters can be varied and applied to different ecosystems to produce settlements that are suitable for different numbers of individuals or groups with differing social needs. Due to their strength, the shelters can also be made into permanent housing, transforming the outcome of natural disasters into new opportunities.
Source: Aga Khan Trust for Culture 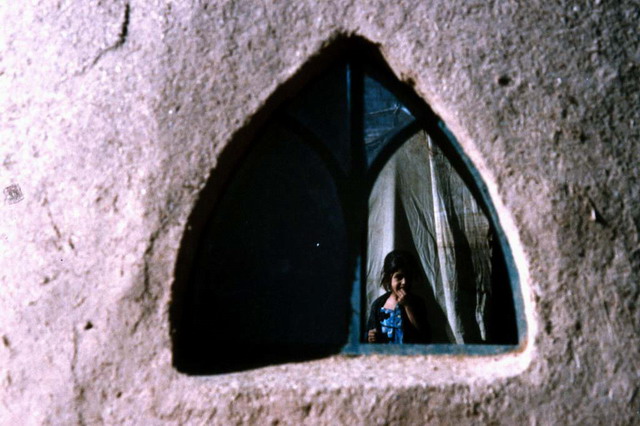