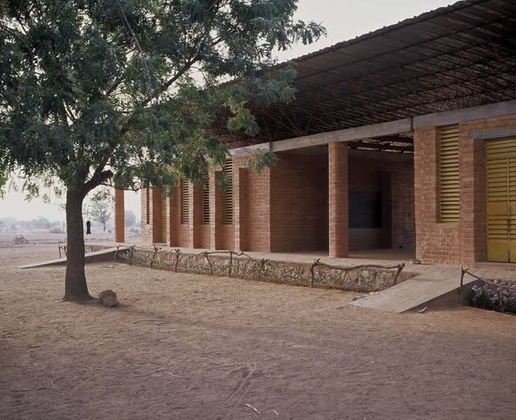 Share
Recipient of the Aga Khan Award for Architecture in 2004.
This school is the result of one man's mission to improve conditions in his village. Not only did he design the school and raise the funds to build it; he also secured government support to train people in building with local materials, and drew on the strong tradition of community solidarity to engage all of the villagers in the construction of this school for their children.

Gando, with a population of 3,000, lies on the southern plains of Burkina Faso, some 200 kilometres from Ouagadougou, the capital. Diébédo Francis Kéré, the first person from Gando to study abroad, was convinced that education was the cornerstone of his people's advancement. As an architecture student in Berlin, he took upon himself the cause of ensuring that his village would not be deprived of a school, and with a group of friends in Germany, Kéré set up a fund-raising association, Schulbausteine für Gando (Bricks for the Gando School). The idea met with a positive response and, having secured finance through the association, Kéré also obtained the support of LOCOMAT (a government agency in Burkina Faso) to train brickmakers in the technique of working with compressed stabilized earth. Construction of the school began in October 2000, carried out largely by the village's men, women and children. After the school was completed in July 2001, construction of buildings for resident teachers began along similar principles.

To achieve sustainability, the project was based on the principles of designing for climatic comfort with low-cost construction, making the most of local materials and the potential of the local community, and adapting technology from the industrialized world in a simple way. It was also conceived as an exemplar that would raise awareness in the local community of the merits of traditional materials.

Climatic considerations largely determined the building's form and materials. Three classrooms are arranged in a linear fashion and separated by covered outdoor areas that can be used for teaching and play. The structure comprises traditional load-bearing walls made from stabilized and compressed earth blocks. Concrete beams run across the width of the ceiling, and steel bars lying across these support a ceiling also of compressed earth blocks. Climatic comfort is also ensured by the overhanging roof, which shades the façades, by the raising of the corrugated metal roof on a steel truss, allowing cooling air to flow freely between the roof and the ceiling, and through the use of earth blocks for the walls, which absorb heat, moderating room temperature.

The roof form was dictated by practical considerations: it was not possible to transport large elements to the site from afar, nor economically viable to use lifting machinery such as cranes. Instead, the architect devised a process whereby common construction steel bars were used to create lightweight trusses, with corrugated metal sheeting laid on top to form the roof. All that was necessary was to teach people how to use a handsaw and a small welding machine.

All the people involved in the project management were native to the village, and the skills learned here will be applied to further initiatives in the village and elsewhere. The way the community organized itself has set an example for two neighbouring villages, which subsequently built their own schools as a cooperative effort. The local authorities have also recognized the project's worth: not only have they provided and paid for the teaching staff, but they have also endeavoured to employ the young people trained there in the town's public projects, using the same techniques.

Jury Citation:
This project has received an Award for its elegant architectonic clarity, achieved with the most humble of means and materials, and for its transformative value. Located in a remote settlement of Burkina Faso, the school is the result of a vision that was first articulated by the architect and then embraced by his community. The first person from his village with access to higher education, while studying architecture in Berlin he became determined to design and build the school. Securing funding for materials from supporters in Germany, he mobilized the men, women and children of the village to erect the building. The result is a structure of grace, warmth and sophistication, in sympathy with the local climate and culture. The practical and the poetic are fused. The primary school in Gando inspires pride and instills hope in its community, laying the foundations for the advancement of a people. 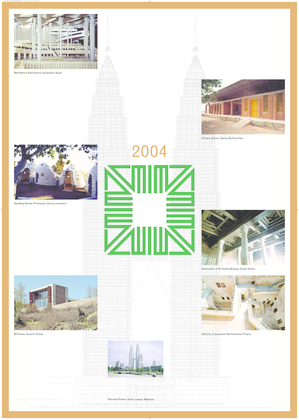