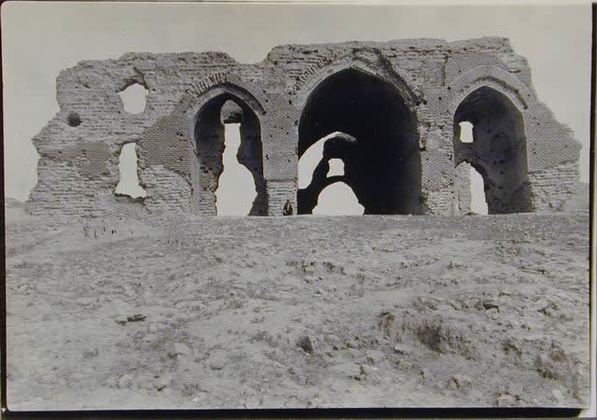 The Main Caliphal Palace at Samarra, known in Arabic as Dar al-Khilafa (Abode of the Caliphate) or Qasr al-Khalifa (Palace of the Caliph), functioned as the primary residence of the Abbasid caliph al-Mu’tasim and several of his successors for a period of nearly fifty years during the middle of the ninth century/third century AH. Construction began on the site circa 836/221 AH. Aside from its importance as an imperial palace, Samarra’s Dar al-Khilafa is of double significance as one of the largest and most extensively excavated Abbasid palaces, although only a tiny fraction of the site has been uncovered.

Mu’tasim commissioned the complex as part of his de novo palatine city that included barracks for the army, administrative bureaus, horseracing courses, grand avenues, and a congregational mosque. During its period of imperial occupation, changing functions, tastes, and general maintenance required renovations and alterations to the building’s form. By 892/279 AH, the court ceased to reside at the Dar al-Khilafa of Samarra, having returned to Baghdad under the caliph al-Mu‘tadid. The occupation history of the building after this point is unclear and needs further archaeological research, but there is no indication in the historical sources at least that the Abbasid court continued to reside in or upkeep the complex after 892/279 AH.1

The Dar al-Khilafa is located on a natural bluff overlooking the Tigris and its floodplain. The palace lies at the north end of the original city founded by Mu‘tasim in 836/221 AH, its southern boundaries coming into contact with the end of two of Samarra’s large arterial avenues, although the connection between these and the palace complex remains unclear. The Abbasids may have chosen its site for aesthetic rather than practical reasons. Far removed from the center of town, the palace would have been difficult to reach but enjoyed sweeping views over the river and surrounding agricultural landscape.2 Its situation at a remove from the congregational mosque also represents a significant departure from the early Islamic model of placing the palace on the qibla side of the congregational mosque.3

The Dar al-Khilafa of Samarra is many times larger than other early Islamic places and is really a complex of palatial buildings grouped together. Ernst Herzfeld, who conducted the first extensive excavations on site, estimated the total area of the palace to be 125 hectares.4

According to Herzfeld, the general plan of the palace consisted of a series of components arranged on a strict west-east axis. Furthest west, near the river, a basin suggested the outline of a large reflecting pool set within a garden. From here, Herzfeld proposed that a ramp or flight of stairs led from riverfront garden up to the top of the escarpment where the ruins of a monumental, three-arched gate still stand. This gate, which he called the “Bab al-‘Amma,” leads onto a series of entryways and courts that culminate in a cruciform building centered on what may have been a domed chamber. The walls and foundations of this part of the palace were still quite clear during Herzfeld’s excavation, and he interpreted this area as the audience hall and the area immediately to its south as the “harim” or private quarters of the palace.

East of the cruciform audience hall is a large rectangular courtyard measuring 350 by 180 meters. The courtyard once had at fountain. On the far eastern side of the courtyard is another complex centered on a sardab or well surrounded by rooms used to keep cool in the summer. Further east still is a polo ground and racecourse. To the north of the courtyard is a square enclosure centered on a massive round pool. This pool, which Herzfeld called the “large sardab,” although it is not technically a sardab, is surrounded by iwans and adjoins a bath house.

North of the pool is another large rectangular enclosure that remains unexcavated. Alastair Northedge proposed that this northern enclosure could be interpreted as the private residence of the caliphs, equivalent to the toponym “Jawsaq al-Khaqani,” while the axially arranged buildings on the southern end of the complex described above could be interpreted as the Dar al-‘Amma or halls of public audience where the court conducted its public ceremonies.5

The main building material for the Dar al-Khilafa was brick, both baked and unbaked. Ceilings would have presumably been wooden, and there are indications of wooden beams on the back of the Bab al-‘Amma. The palace was also lavishly decorated. The primary medium for wall decoration was carved stucco, followed by wall painting, wooden panels, marble revetments, and glass.6 The stucco ornament and wall paintings were partly inventoried by Ernst Herzfeld in his Samarra excavation series and remain a foundational text for our understanding of architectural ornament during the Abbasid period, although crucial new studies of this material are underway.7 Ernst Herzfeld's original watercolors of the wall painting fragments excavated at the site can be seen among the Ernst Herzfeld Papers collection of the Metropolitan Museum of Art.

al-'Amid, Tahir Muzaffar. The 'Abbasid Architecture of Samarra in the Reign of both al-Mu'tasim and al-Mutawakkil, 91-120.. Baghdad: al-Ma'aref Press, 1973. 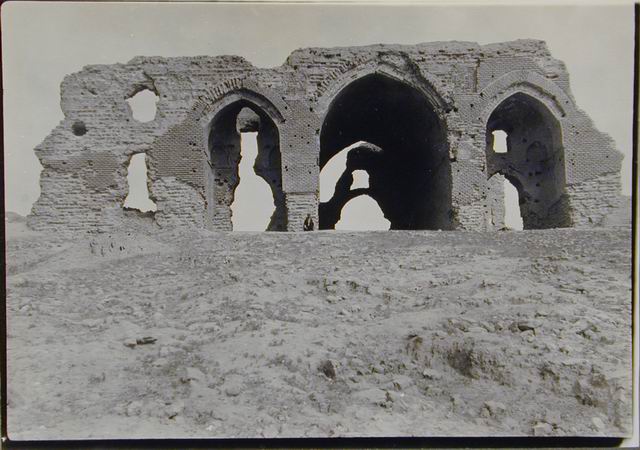