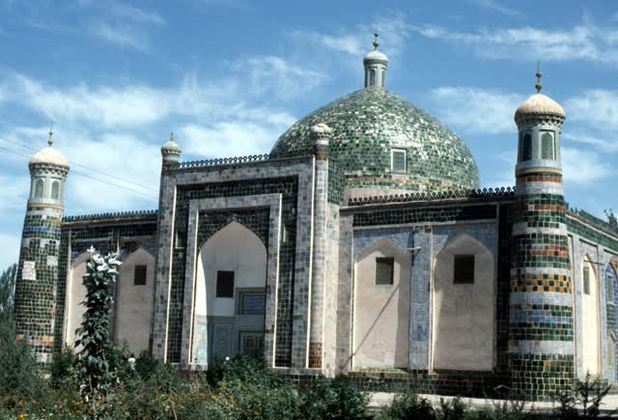 Share
Located in a northeastern suburb about five kilometers outside of Kashi (Kashgar), the Apak Khoja Mausoleum is the mausoleum complex of the Khoja family of the Baishan Sect, who ruled this area of Xinjiang, including Khotan, Yarkand, Aksu, Kutcha and Tarim, from the seventeenth to mid-eighteenth century under Qing Chinese suzerainty. This family of religious leaders originally from Bukhara also built the Aitika Mosque in downtown Kashi.

The Apak Khoja Complex was founded in the early seventeenth century with a religious school built by Yusuf Khoja, who later also built himself a mausoleum at the site in 1640. With the subsequent addition of several mosques, the complex now covers almost three hectares. It is the largest Islamic complex in the Xinjiang Province and is a major pilgrimage center. The complex has a slightly irregular rectangular plan with a large central garden surrounded by the High and Low Mosques and the main gate to the south, the Great Mosque to the west, the Small Green Mosque to the north and the Mausoleum to the east. Due to the non-orthogonal layout of the complex that responds to the topography of the landscape, all mosques face Mecca at a slightly different angle.

The complex is entered from a large masonry gateway at the southeast corner of the complex. This imposing edifice, bordered by two thin engaged columns with cupolas, is covered with blue tiles of various designs. A tile panel with an Arabic inscription surmounts the portal. The recessed doorway bears a second inscriptive panel. This gateway has experienced slight damage from repairs in the 1950s that employed cement that is unresponsive to changes in temperature and humidity, and displays additional damage from the 1978 earthquake.

The High and Low Mosques, or the Southern Mosque

Connected to the west of the main gateway are the High and Low Mosques, also referred to together as the Southern Mosque. The portico of the High Mosque is accessed via six steps through a brick portal beside the main gate. This outer, hypostyle section of the High Mosque is three bays deep and defined by rows of carved and painted wooden columns. It was built in 1926 to create shaded space for outdoor use in warm weather. The columns are joined with muqarnas capitals to the rafters, which are adorned with painted scenery and floral motifs. Two towers with cupolas, each ringed with decorative brick patterns, mark the edges created by the stone veranda before the portico. The prayer hall, which is entered through two doors at either end of the portico, is two bays deep and was built in 1873. Its qibla wall has arched niches flanking the central mihrab.

The brick qibla wall of the High Mosque serves as the eastern wall of the older Low Mosque, which dates from the late eighteenth century. Unlike the High Mosque with its open portico, this mosque has a fully enclosed, long, mud-brick anteroom that runs behind the qibla wall of the High Mosque and precedes the square prayer hall of the Low Mosque. The dome that caps the prayer hall has ribs visible from the exterior. Such a mosque ensemble, an open-sided summer mosque complemented by an enclosed winter mosque, is common in Uyghur religious architecture. Directly to the west of the Low Mosque are the madrasa and the scripture hall enclosing a cloister courtyard. To the south of the complex, outside the Low Mosque, is a tree-lined pool.

The tallest and largest building of the complex is the mausoleum built in 1640 by Yusuf Khoja for himself. However, the mausoleum is now named after his son Apak Khoja, who became more famous than his father and who was also buried here in 1693. Locally, it is also called the Tomb of Xinagfei of the Tomb of the Perfumed Concubine, with reference to Mahran Khoja, a daughter of Satuk Boghra Khan, who is said to have been one of the favorite consorts of the Qing Emperor. According to most sources, however, she was actually buried in Beijing in 1788.

Four heavy engaged towers, capped with low cupolas carried on muqarnas cornices, mark the corners of the square mausoleum and a heavy pishtaq frames its western entrance. The columnless hall measures thirty-nine meters on each side and contains numerous tombs. It is covered by a green-tiled dome sixteen meters in diameter and crowned by a lantern at a height of twenty-four meters above ground. The vaults supporting the dome create four iwans inside the burial hall and a peripheral corridor separates the outer walls of the chamber from the walls of the burial hall. The interior is whitewashed while the exterior faces are partitioned into long arched niches punctured by screened windows and decorated with blue, green and white patterned tiles. Due to replacements over time, many of the tiles covering the mausoleum and its minarets do not match, creating a patchwork effect. Four sets of stairs set inside the corner towers lead up to the roof terrace, protected by a crenelated parapet.

The mausoleum is surrounded by a walled graveyard that was in use until quite recently. This cemetery with its vaulted sarcophagi is locally referred to as the "city of the dead".

To the northwest of the mausoleum is the seventeenth-century Small Green Mosque, used by Apak Khoja for the reading of the Quran. Similar to the Southern Mosque, this mosque has both a portico for use in warmer weather and an enclosed prayer hall for winter use. The wooden hypostyle south-facing portico is four bays deep and three bays wide. The dome of the prayer hall is carried on three nested drums, stepping down from a twenty-four sided drum to a twelve-sided drum, and then to an octagonal drum before resting on the square hall. This dome clad with green tiles mimics that of the mausoleum. A high octagonal lantern surmounts it.

On the western side of the complex is the Great Mosque, or the New Western Mosque. This mosque was built in 1873 by Yakub Beg, who served as a general in the Qing army between 1866 and 1877. The Great Mosque has a U-shaped shaped plan. The prayer hall consists of an arcade of low domed bays with heavy squinches that curve around the east-west axis centered on the domed mihrab, similar to the Imin Mosque in Turfan. These three sides embrace the fifteen-bay wide and four bay deep columned portico, with its own exterior central mihrab, decorated with a vibrant polychromatic wood panel. This central hypostyle section bears a flat roof, in contrast to the rhythmic shallow domes of the surrounding prayer hall. The composition is dominated on the exterior by the larger dome marking the mihrab bay and the raised gateways at either end of the arcaded arms. 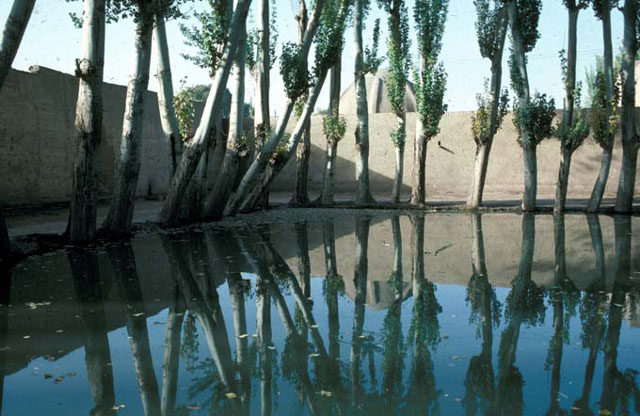