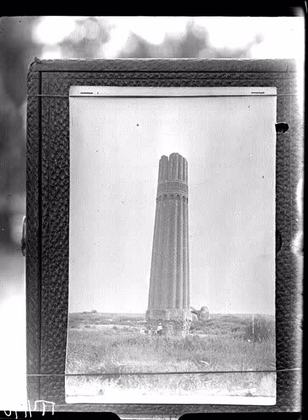 Share
The Minaret of Jarkurgan is located in the village of Jarkurgan, twenty-six kilometers north of Termez in the Surkhandarya region of Uzbekistan. Designed by the architect Ali bin Muhammad Serakhsi, the brick construction was erected in 1108-1109 under Qarakhanid rule. Today the minaret consists of two sections, a cylindrical shaft and octagonal base, and reaches a height of roughly nineteen meters. As evidenced by the remaining edge at the summit of minaret, Serakhsi's original design most likely had a second shaft.

The minaret rests on a low octagonal base (socle) that is approximately five and a half meters wide, and is decorated with elongated pointed arch niches centered on each side. The base is separated from the shaft by a band of eight inscription panels. The shaft is ringed by sixteen engaged half columns decorated with herringbone bond. Crowning the shaft is a band of sixteen crescent arch niches followed by a circular inscription band.

Cohn-Wiener's photographs from 1924-1925 show heavy erosion of both the base and lower inscription panels, but the minaret has since been restored. Today the minaret stands within a space enclosed by a brick wall, and the octagonal platform upon which the minaret sits is depressed.

Schroeder, Eric. "The Seljuq Period." In A Survey of Persian Art: From the Prehistoric Times to the Present III, edited by Arthur Upham Pope and Phyllis Ackerman, 1027. Tehran: Soroush Press, 1938. 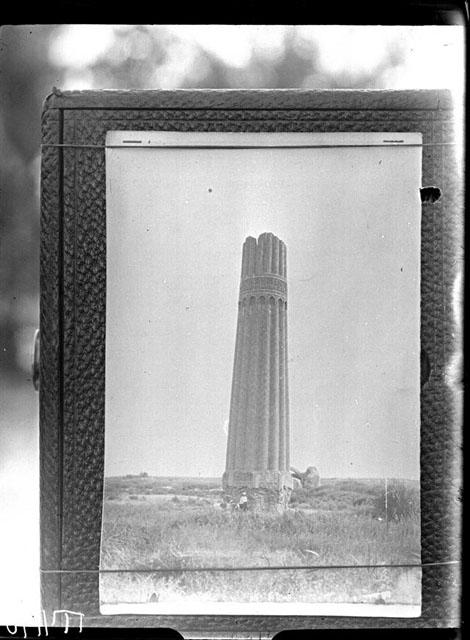