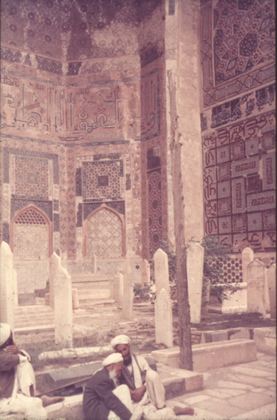 Share
This funerary compound (hazira) houses the tomb of renowned Sufi mystic and saint Khwaja 'Abd Allah Ansari, also known as the guardian pir (wise man) of Herat. Following his death in 1098, his tomb in the village of Gazargah became a major Sunni pilgrimage center. The shrine enclosing the tomb was commissioned by Timurid ruler Shah Rukh bin Timur (1405-1447) and completed by Architect Qavam al-Din Shirazi in 1425, as noted in the inscription on the southwest portal. It was repaired by poet and patron Alishir Nava'i in 1499, six years after a major flood.

Located between two roads leading to Herat, the shrine buildings are loosely organized while all facing qibla along the southwest-northeast axis. Beside the funerary shrine with its cemetery forecourt, the complex includes the Zarnigar Khana (Gilded Room) to the south, a summer mosque to the southwest, the Mir's house to the northwest, and a long strip of walled gardens extending southwest from the house that include an underground mosque, an ablution pool and a structure known as the Namakdan (Salt Cellar). Other structures described by travelers have not survived past the second half of the twentieth century.

The Timurid shrine is centered on a rectangular four-iwan courtyard that contains the tomb of Ansari towards its northeast end, among a large number of headstones dating from various periods. It is entered from the southwest through a deep, five-sided iwan covered with a five-sided semi-vault. The two sides of the iwan flanking the arched entrance are also carved into five-sided niches. Screen walls with rows of four blind niches topped by windows flank the portal iwan, terminating at octagonal towers. The surfaces of the towers, blind niches and the portal are decorated with glazed bricks and tiles.

An arched doorway topped with carved stucco panels leads into the vestibule (dihliz), a square room with chamfered corners and a dodecagonal vault, that gives access to long halls to the left and right containing the mosque (masjid) and the prayer room (jama'at khana), respectively. The two prayer halls are covered with transverse vaults, while the smaller rooms around them have squinch-net vaults decorated with plaster muqarnas. At either end of the halls, staircases located inside the octagonal towers lead up to the upper story galleries.

Beyond the vestibule to the northeast is the rectangular cemetery courtyard, measuring roughly thirty-two by fifty-five meters. Each courtyard façade is centered on a tall iwan. The side iwans to the southeast and northwest are flanked by four identical arched niches on either side; the eight niches to the south lead into single tomb chambers, while the others are left blind. Shallower niches animate the southwest façade and the chamfered corners of the courtyard.

The pishtaq of the northeast iwan is the focal point of the entire structure and overlooks the tomb of Khwaja Abdullah Ansari. A high portal screen, measuring about thirty meters high frames the five-sided iwan and is flanked up to mid height with four shallow niches on two levels. Its towering crown is bound by a band of miniature niches around a row of five arched windows. Two cupolas with open-arched hexagonal bases cap the portal screen. Set about ten meters in front of the pishtaq, the tomb of the saint is protected by a roofed wooden lattice about six by eight meters, with an inscriptive marble pillar.

After the original Timurid structure was finished in 1425, three series of additions were built onto the northwest and northeast walls of the hazira. Behind the northwestern iwan and single tomb-chambers is the first addition of three rooms accessed from the iwan. Two more rooms were added here at a later date. The third and more recent addition envelopes the northeastern part of the structure.

The second most important structure in the complex is the Khana Zarnigar, or, Zarnegar, located about twenty-five meters south of the shrine portal. Its name refers to the rich turquoise and gilt decorations of the interior. Built for use as a khanqah, the structure was converted to a primary school by 1968.

This bi-level rectangular building with rounded corners measures approximately eighteen by twenty-seven meters and supports a shallow dome as well as a truncated minaret. Its northwest portal opens into a large cross-shaped vestibule that leads into the domed chamber. Measuring nine and a half meters square, the chamber is covered by a dome supported on squinch-net vaults and has a mihrab on its southwest wall. The row of three small rooms placed beyond the main chamber lead to the two rear exits and to staircases connecting to the upper floor. They feature twenty-point and sixteen-point plaster star-vaults.

The Namakdan is a two-storied dodecagonal building measuring approximately fifteen meters in diameter and derives its name from its shape. Its four portal iwans with double nested arches open into an octagonal central hall, covered with an umbrella vault resting on a central column. Blind niches placed between the portals are pierced with doorways into four small, octagonal rooms inside the exterior wall. Stairs here lead up a narrow gallery that connects the twelve arched balconies of the upper floor. The Namakdan is used today as a hostel for the shrine's visitors.

The cistern (ab-anbar, or, hauz-i-zamzam) is located approximately forty meters northwest of the shrine portal. It is known as the well of zamzam, as indicated by its inscription.

The entrance to the underground mosque is located near the cistern, about sixty meters west of the shrine portal. The dome of its prayer hall protrudes slightly above ground. Its deep entry alcove leads into small, private meditation rooms.

Golombek, Lisa. The Timurid Shrine at Gazur Gah: An Iconographical Interpretation of Architecture. University of Michigan, 1968. 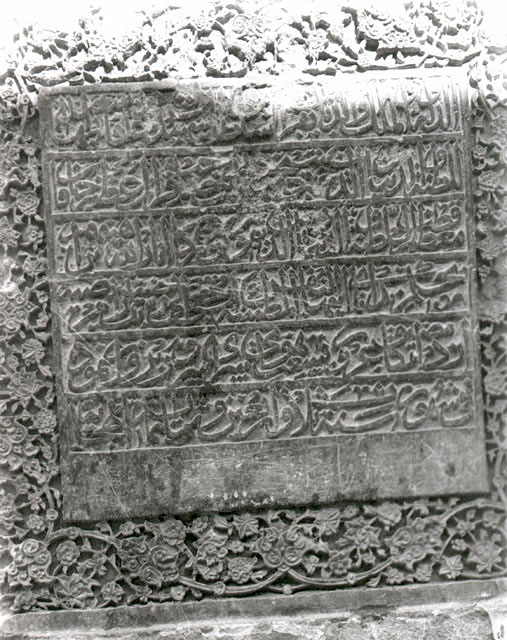