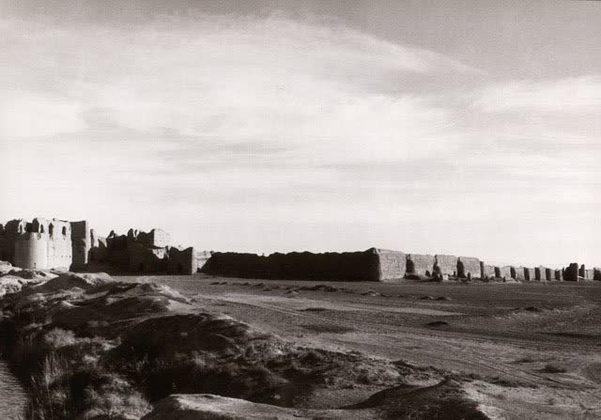 Share
The ancient city of Bust on the east bank of the Helmand river in southern Afghanistan was settled as early as the seventh century B.C.E. and lived its golden age under the Ghaznavids, who established it as their winter capital in 976. A military campsite, located six kilometers north of the capital on the eastern bank of the Helmand River, became their site of choice for palaces and grew by the mid-eleventh century into a walled royal suburb. Its Arabic name, Lashkari Bazar, joins the word for military "Al-'Askar" with "Bazaar," referring to the long market street leading to the southern gate of the suburb. (The Persian equivalent is "Lashkargah, or Soldier's Place.) Lashkari Bazar was burnt in 1150-51 during the Ghurid conquest by 'Ala al-Din Jahansuz (or Husayn II, reg. 1149-1161) and was restored under the ensuing Ghurid rule. Bust and Lashkari Bazar were destroyed in a raid by the Khwarazmshah or Mongolian army in the early thirteenth century.

The ruins of the Lashkari Bazar extend for 1.4 kilometers along the river (north-south) in an area as wide as 600 meters (east-west), and include hundreds of residential and military structures made of mud-brick. Among the surviving structures are three large fortified palaces (North, Central and South) built over a cliff overlooking the river. The remains were partially excavated between 1949 and 1951 by the French Archaeological Delegation (DAFA - Délégation Archéologique Française en Afghanistan).

The Northern palace has a rectangular plan, almost square at ninety (north-south) by one-hundred (east-west) meters. Its fortified walls are buttressed with fifteen semi-circular towers, four of which reinforce the corners. The palace is entered on axis from the south and north. Inside its walls are three distinct courtyard buildings, separated by gardens or paved courts.

The Central Palace, dating back to Samanid rule, is thought to be the oldest structure in Lashkari Bazar. Its rectangular plan is oriented with the cardinal axes and measures about fifty-two (north-south) by thirty-five (east-west) meters. Its fortified walls, which are buttressed with circular corner towers, once rose to a height of about sixteen meters.

The palace is organized on two floors divided into quadrants with barrel-vaulted corridors running along the central axes, intersecting at a large central light-well. The north-south corridors end in porticoes or loggias on both floors, while the shorter east-west corridors are enclosed to form a room and an iwan on the first floor and serve only as loggias on the upper floor. Each of the quadrants has a unique room layout, with varying access arrangements based on their public or private purpose. Six of the seven eastern rooms on the first floor are entered from the exterior while the western rooms are accessed only through two doorways along the north-south corridor. The two stairways to the more private second floor are located south of the east-west corridors and are entered only from the exterior.

The Southern Palace is located about two-hundred and fifty meters to the southwest of the Central Palace. Its construction was initiated by Mahmud of Ghazni (reg. 998-1030) and completed under his successor, Mas'ud I (reg. 1031-1040) in 1036. It is the largest palace of Lashkari Bazar, measuring over one-hundred and sixty-five (north-south) by ninety-five (east-west) meters at its largest. Built as a rectangular courtyard structure, the palace was enlarged during the Ghurid period to include irregular segments to the west or north, pushing its walls out to the banks of a bend in the Helmand River. Built of adobe reinforced with timber on a foundation of baked brick or stone, the crumbling walls of the palace retain segments of carved and painted stucco decoration from the Ghurid period.

The main, southern elevation of the palace is spanned by a two tiers of blind archways, which were once paneled with floral and geometric stucco reliefs and highlighted with inscriptive medallions. Centered among the archways, the portal retains the beginning and end of a large Kufic band commemorating the Ghurid restoration, including the partially legible date date of 55 (?) A.H. (between 1155 and 1163). The portal opens into a cruciform entry hall that gives access to rooms on either side and opens into the palace court to the north. The courtyard is fifty meters wide and sixty-three meters long and has four axial iwans. Its east and west flanks are planned symmetrically with a series of eight archways leading into six rooms and corridors (or stair halls) located at the corners. The eastern iwan opens into the walled palace gardens. Beyond the western iwan is the Ghurid extension, which contains the harem quarters and the palace baths, served by running water. The southern flank of the courtyard is occupied by six identical rooms flanking the small southern iwan. To the north, the grand iwan is flanked by two large, rectangular halls. The courtyard walls are animated with molded pilasters, colonettes and blind archways similar to the southern elevation.

The northern wing of the palace contains four apartments -- two on either side of the grand iwan and its flanking halls and two others behind the iwan, separated by the Audience Hall. The administrative function is served by the Audience Hall (Throne Room), which is accessed from the northern iwan through a square vestibule and from the two apartments adjoining it. Its rectangular core is enveloped by an ambulatory on three sides, including a wider antechamber to the south that served as a mosque. To the north, the audience hall opened onto the river ridge with a portico, with views of the plains beyond. A rose-petalled water-basin, fed by a canal running east-west, marked the center of the room. The lower portion of the walls were painted with murals; a surviving fragments depicting Ghaznavid guardsmen on a background of flowers, fruit trees, birds and gazelle is displayed at the Kabul Museum. Carved bands and panels of brick and terracotta adorned the upper sections of the walls. Fragments of a grand panel found in the room contain Quranic verses from the Naml Sura (XXVII) describing Queen Sheba's visit to King Solomon.

The Southern Palace was preceded to the south by a vast walled precourt, whose gate stood at the southern end of a bazaar street -- four hundred and fifty meters long with more than a hundred stalls -- that gave its name to the royal suburb. Foundations of a public mosque were excavated along the west edge of the palace forecourt. Its plan -- two bays wide and sixteen bays long -- measured eight-five meters by ten meters and was centered on a domed sanctuary at center.