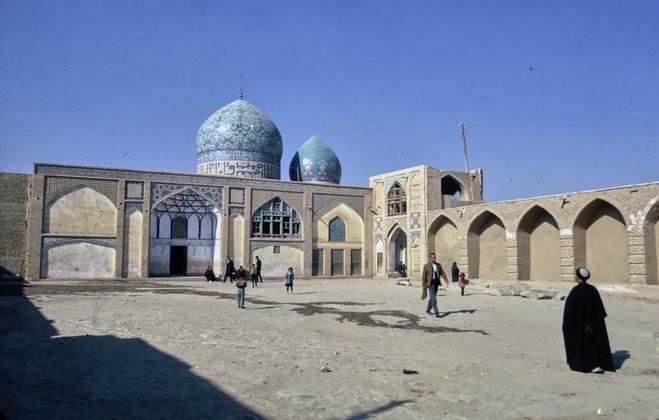 Share
The shrine of Darb-i Imam, which means the shrine of the Imams, is a funerary complex consisting of an ancient cemetery, shrine structures, and courtyards representing different construction periods and styles within the present day Dardasht quarter of Isfahan. In the Seljuq period, the cemetery existed beyond city walls in the city's northwest quadrant, but in the tenth century, it was incorporated within the city in the Sunbulistan or Chumulan quarter. The complex is unusual in having two closely spaced domes, but is renowned for the excellence of the mosaic tile work on its iwan (a vaulted hall, walled in three sides with one end open), portals and galleries.
The first structures were built by Jalal al- Din Safarshah, a vassal of Sultan Muhammadi the governor of Isfahan during the Qara Qoyunlu reign in 1453. A richly embellished pishtaq (a projecting entrance porch), a square vestibule, and a mausoleum to Jahan Shah Qara Qoyunlu's mother, alone remain from the first stage of construction. The northern courtyard is believed to have once contained the mosque of Sayyid Jafar though little corroborating archaeological evidence has been found. A long hall flanking fifteenth century buildings on the east, two smaller rooms to the south and its western façade were gradually added to the complex. The shrine assumed importance as the resting place of two Imamzadas (or descendants of the fourth Imam Ali), Ibrahim Tabatabai and Zayn al-'Abidin Ali during the Safavid period and extensive repairs and additions were carried out, particularly under Safavid rulers Shah Sulayman and Shah Sultan Husayn. Husayni Shahristani built the larger of the famed enameled tile domes in 1601-2 and the smaller in 1670-71 as the complex grew into a venerable burial ground for Safavid dignitaries. Safavid ruler Shah Abbas exhumed the tomb of a predecessor Safavid emperor, Shah Tahmasp that was defiled by Mongols in Mashhad and reburied the remains in this mausoleum. The complex consisted of three courts (to the north, east and west) bordering the shrine while the second tiled portal was constructed in the eighteenth century. In the nineteenth century, a hospital was built on the site by the Pahlavi dynasty.
The Darb-i-Imam shrine like the Blue Mosque at Tabriz and the Maydan Mosque at Kashan, presents the characteristic brilliance of quality and color of early Timurid tile work in Central Iran. The geometric patterns of black glazed and unglazed terracotta pieces in the dado and the individual arabesque ornament plaques set in relief on the walls of the north portal represent the outstanding originality and clarity of design in the complex's earliest structures. The brilliance in execution of the shrine's celebrated mosaic faience pishtaq is well matched by the elegance of the console of the shrine's dome. The shrine's portal was copied in the Qutbiyah mosque of 1543, which was later removed to the Chihil Sutun garden. The shrine is thus, noted for both the quality of its decorative work in plaster inscription friezes and mosaic tile work as well as its influence, especially of the raised tile mosaic pattern and thuluth inscriptions on later Safavid monuments, such as the mausoleum of Harun-i- Vilayat and the Friday Mosque of Isfahan.
Sources:

Lesson 20A: International Trade and the King’s Silk Monopoly Part One 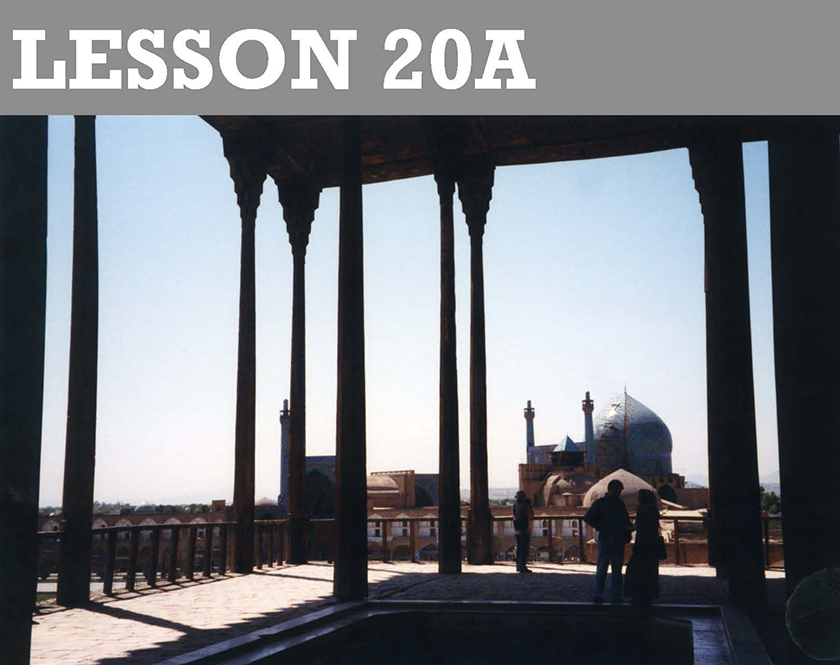 The twentieth lesson (part 1 of 2) in a 22 lesson course on Monuments of Islamic Architecture developed by Professors Gulru Necipoglu and David Roxburgh at the Aga Khan Program for Islamic Architecture at Harvard University. This lesson explores the architectural and social formation of Safavid Isfahan that was shaped by the political and economic aims of Shah ʿAbbas and his successors and the sociopolitical reorganization shared in the alliances and competitions among vested groups. This included a royal monopoly in the silk trade, and their Armenian and European facilitators, as well as the “capitalist” ventures of the new mercantile communities that engaged in long‐distance trade.