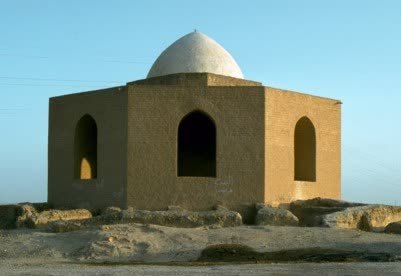 The Qubba al-Sulaybiyya is a domed octagonal pavilion at Samarra in Iraq. Scholars have dated the building to the last quarter of the ninth century/third century AH based on the material used to build it: a sort of artificial stone made from clay also used in the nearby Qasr al-‘Ashiq, dated to the reign of Abbasid caliph al-Mu‘tamid (870-892).[1] Although the building eventually served as a monumental burial site for three unidentified people, the original function of the structure is still ambiguous. The building as it stands today is the product of restoration and rebuilding after an archaeological investigation in the 1970s.

The building is situated in what was once a zone of palaces and gardens on the west bank of the Tigris, northwest of what was the Abbasid city.

At the center of the building is a square domed chamber whose outer walls are beveled to form an octagon. This central room is surrounded by an ambulatory whose outer walls are also octagonal. The square chamber had four openings, one in each side. The exterior walls of the octagonal ambulatory communicating with the outside have one arched opening in each face. The central square chamber was sparsely decorated, with blind niches flanking each of its four openings. An octagonal transition zone with squinches supported a dome over this room.

Excavations in the 1970s revealed that the octagonal pavilion in turn sits on a platform that extended 5 meters from the outer edge of the pavilion and was raised 2.5 meters above ground level. Four broad ramps gave access to the platform. Under the platform, a series of chambers seem to have provided storage.[2]

Three Muslim burials were uncovered in the central square chamber. Ernst Herzfeld, who first excavated the building, interpreted it as the mausoleum of three Abbasid caliphs. Thomas Leisten, who published the final report of Herzfeld’s excavation, disagreed, suggesting that it began as a garden pavilion and was later repurposed as a tomb.[3] Alastair Northedge offered a second interpretation of the building as a model of the Ka’aba, based on a passage in the tenth-century geographer al-Muqaddasi’s description of the city that mentioned such a monument.[4] 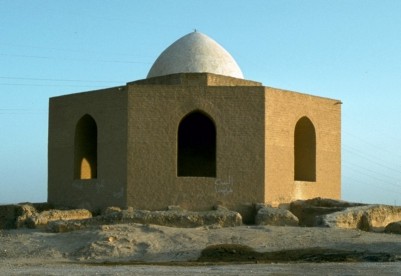