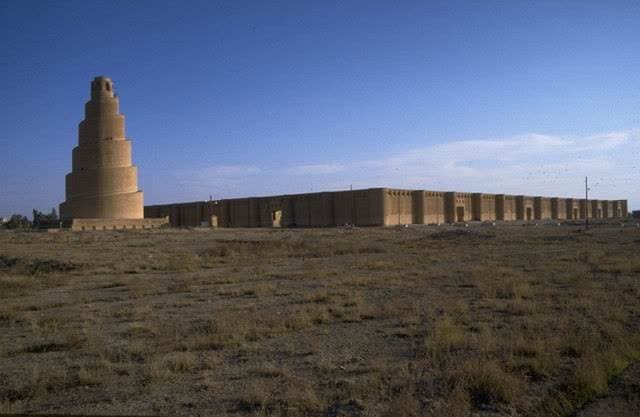 The Abbasid caliph al-Mutawakkil commissioned the construction of a new congregational mosque for the city of Samarra after his succession to the throne in the mid-ninth century/third century AH. This mosque replaced the congregational mosque constructed by Mutwakkil’s predecessor al-Mu‘tasim, whose traces are unidentified but would have been located nearby. Mutawakkil’s mosque, known as Jami’ al-Mutawakkil or Masjid al-Jami’ (The Great Mosque) was completed circa 860/245 AH. The outer walls of its massive prayer hall still stand, as does its famous spiral minaret, known as Malwiyya. Its size and the form of its minaret gave the mosque notoriety during the time of its construction and to this day.

The remains of the mosque are located northeast of the modern city center of Samarra, which overly the core of the Abbasid city. At the time of its construction, it would have stood just outside the limit of the built up city, abutting a large enclosure used for hunting known as al-Hayr. Residents accessed the mosque via three broad parallel lanes that ran parallel to one another from the main avenue east toward the western boundaries of the mosque complex. These access lanes were lined with markets1.

The mosque complex consisted of a rectangular building measuring 239 x 156 m surrounded by an outer enclosure (ziyada) occupying an area of 374 x 443 m. The minaret rises from a square platform in the outer enclosure on the mosque’s northeastern side (opposite the qibla). At the time of construction, it was the world's largest mosque.

The structure and purpose of the ziyada is not entirely clear, although aerial photography suggests that it was divided into various open areas and covered hypostyle spaces (the latter presumably used for prayer).

The main building is encompassed by an outer baked brick wall supported by a total of forty-four semi-circular towers including one at each corner. Between each tower, a frieze of sunken square niches with beveled frames runs the upper course of the entire structure. The outer walls included twenty-eight windows with twenty-four of them being on the southeastern (qibla) face, one for each of the aisles in the inner sanctuary with the exception of the one with the mihrab.

Sixteen doors provided access to the building: six on the east, five on the west, two on the south (qibla) flanking the mihrab, and three on the north. The interior of the mosque comprises a large central courtyard surrounded on all sides by covered aisles (riwaqs). The riwaq on the north side was three aisle deep, the riwaqs on east and west were four aisles deep and the prayer hall on the south side was nine aisles deep.

The prayer hall featured a monumental mihrab. The mihrab niche took the form of a pointed arch supported by two sets of engaged columns on either side. Framing the arch was a rectangular molding.

The courtyard’s fountain was domed was elaborately decorated with mosaics and marble paneling. Arab historians claim that the basin used for the fountain was dragged by elephants from the Haruni Palace (built by caliph al-Wathiq along the Tigris). It is said to have been carved from a solid block of stone and called kasat al-fir’awn (pharaoh’s cup). Herzfeld believed this basin to be equivalent to a large basin made of syenite he found in the Dar al-Khilafa. This basin is now in the courtyard of the so-called Abbasid Palace (Qasr al-‘Abbasi) in Baghdad.

Very little architectural ornament remains from the palace but the Arab historians describe its walls as being coated with glazed or glass panels. Excavations undertaken by the Iraq DGA seemingly confirm this description, as broken pieces of dark blue glass slabs were found in the mosque’s prayer hall area.2

Directly 27.25 meters from the center of the mosque's north face stands the mosque’s spiral minaret, which rises approximately 55 meters high. The base of the minaret measures thirty-three square meters and rises to a height of almost three meters. It supports a spiral ramp that winds counterclockwise five times up the minaret beginning on the side closest to the mosque. At the top of the tower rests a round vestibule, which is adorned with eight pointed-arched niches.

The top of the minaret was destroyed in a bombing in 2005. In 2015 UNESCO and the Iraqi government announced an agreement regarding the conservation of the Samarra archeological site, which will include restoration of the mosque. 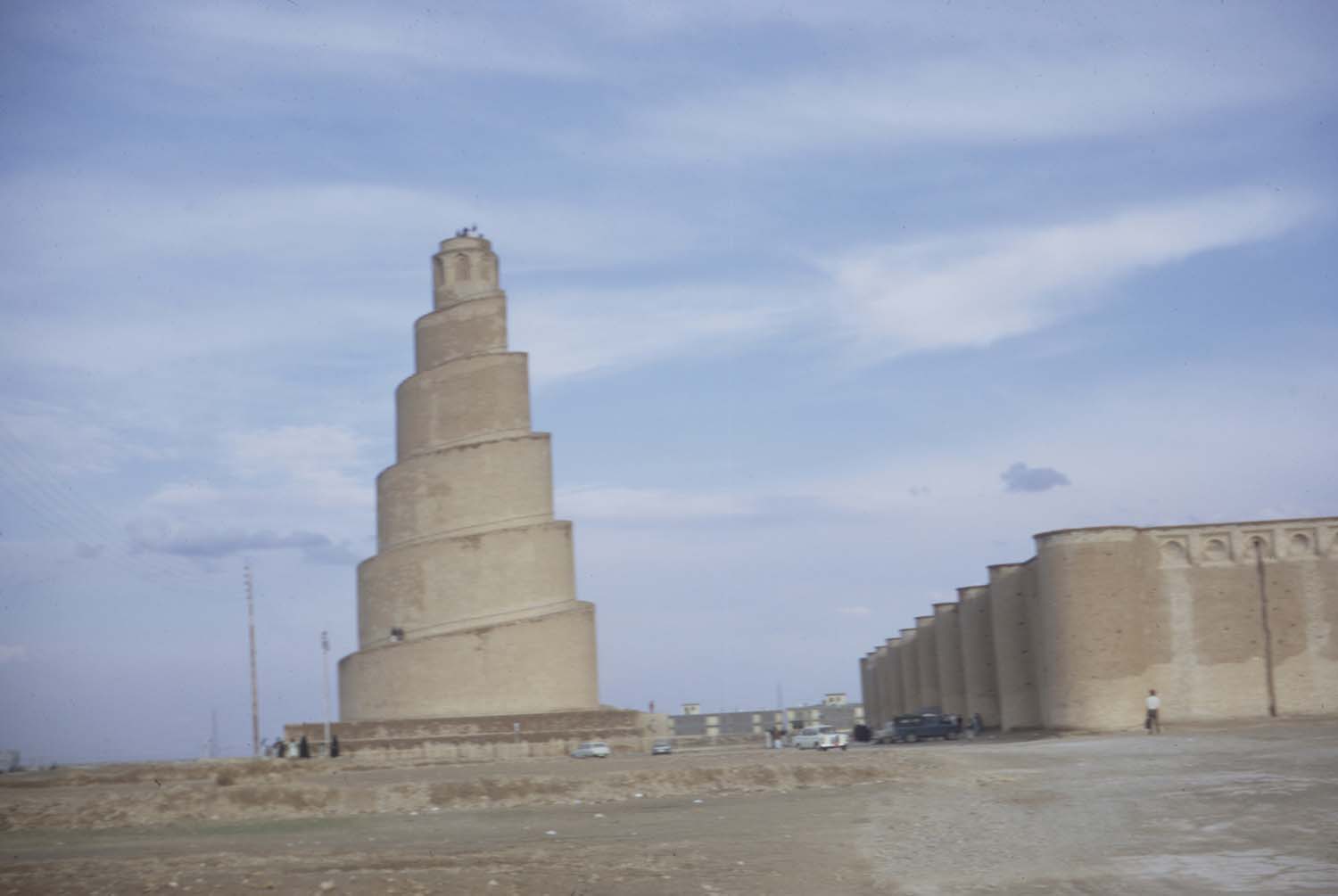