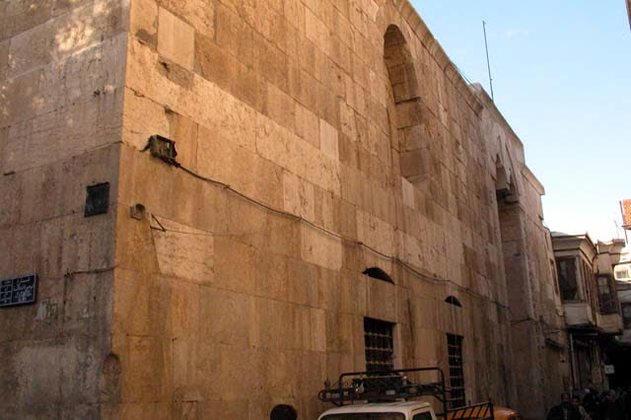 Share
This madrasa is an important example of Ayyubid architecture in Syria. It was founded in 1215 by King al-Adel Sayf al-Din abi Bakr Mohammed bin Ayub, who is buried in the tomb (d. 1219). The main parts of the building remain in good condition due to the continued attention the madrasa has received over the years. It was converted into the National Museum in 1919.

The general plan of the madrasa is organized around the central square courtyard (sahn) that distributes the various functions on its four sides. The southern courtyard façade precedes the prayer hall, while the northern side opens to a large iwan. The western side has been completely renewed in the last century but used to lead to a series of residential cells. It includes the staircase that leads to the second story of cells and smaller halls. The eastern façade leads to the main entrance of the madrasa through a large hall covered with a stone vault. The main door is on the same axis of the eastern opening to the courtyard.

The monolithic façades are constructed from limestone blocks 60 cm high. These blocks are plain without any ornamentation forming monumental façades without windows and a thick unadorned cornice. The main gate is unique in design when compared to other Ayyubid examples, a large iwan as high as the façade covered with two stone vaults that culminate in a hanging 2.2 m long keystone. This stone divides the iwan into two arches with three cameos each. The iwan is enclosed with two small stone muqarnas domes. A large doorway centers the iwan; this black and white stone opening has two outer layers of carved details.

The courtyard is almost square (18m x 17m) and covered with stone that created geometric patterns outlined with gold bands between the tiles. A square fountain (8.5m x 8.5m) stands in the middle of the courtyard; its semicircular corners indicate its Ayyubid character. Because the stone courtyard façades are devoid of ornament, the openings, domes and iwans create a tranquil environment animated with light and shade over the basic volumes.

The tomb (turba or turbeh) is covered with a dome raised on an octagonal base supported on stone muqarnas pendentives. The space has two windows on the eastern and western walls and a mihrab similar to the one in the prayer hall. The tomb is also starkly minimal following the style of the rest of the building.

Rihawi, Abdul Qader. Arabic Islamic Architecture: Its Characteristics and Traces in Syria, 149-154. Damascus: Publications of the Ministry of Culture and National Leadership, 1979. 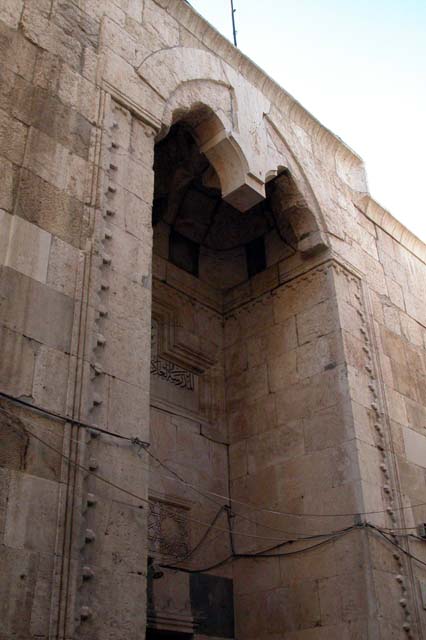