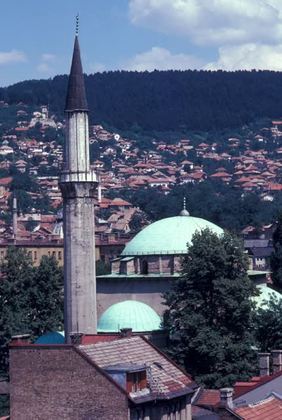 Share
The Gazi Husrev Bey Complex in Sarajevo is one of the main Ottoman complexes in the Balkans. Built in the first half of the sixteenth century, the complex included a mosque, madrasa, Quranic school, khanqah, soup kitchen, hospice, library, khan, bazaar, public baths and two tombs. Gazi Husrev Bey was an Ottoman governor in Bosnia and contributed greatly to the urban development of Sarajevo with his architectural patronage. Existing waqf documents describe the operations and the maintenance of these sites by an extensive staff, and supported by funds from regional agricultural enterprises.

The mosque was constructed by Ajem Esir Ali, an architect from Tabriz who had been taken prisoner during Ottoman incursions into Persia and became a chief architect in Istanbul. The mosque in Sarajevo is among the successes of this school outside Constantinople. Constructed in cut stone, the mosque is square in plan, surmounted by a central dome that is approximately thirteen meters in diameter and twenty-six meters high. The central prayer hall is flanked by two wings and has a qibla iwan covered by a semi-dome. Five cupolas cover a portico closed on the sides and supported by five marble columns. Three tiers of muqarnas decoration embellish their capitals. The main entrance is set in a niche decorated by seven tiers of muqarnas. Above the entry arch, an inscriptive plaque of tuluth Arabic dates the contruction of the mosque to 1531 (937 A.H.). The portico façade includes a mihrab and four windows.

Inside, the mihrab features seven tiers of muqarnas ornamentation and the qibla wall surrounding it is covered with painted decoration. The qibla semi-dome has a band of muquarnas at its base. The marble minbar highlights delicate latticework. To the right of the main entrance along the northern wall of the prayer hall, is a two-story gallery (mahfil). To its left is a screened enclosure, known as maqsura. The windows are not original. During the Austro-Hungarian period, neo-classical decorations were painted on the interior walls, the courtyard was modified and the ablution fountain was redone in Rococo style. The mosque has a tall minaret with a single balcony that is almost thirty-six meters high.

Also constructed in stone, the madrasa is organized around an arcaded square courtyard surrounded by twelve rooms on three sides with a domed classroom (dersane) on the fourth side, facing the entrance. The entryway features six-tiered muqarnas decoration above an inscriptive plaque that dates construction to 1537 (944 A.H.). A small rectangular pool occupies the center of the courtyard. A passageway to the right of the classroom leads to the back garden. Individual domed cells, each furnished with a furnace, provided accommodation for students. The madrasa was turned into a high school in the 1960s.

To the west of the mosque would have been the hospice and soup kitchen, which were taken down sometime in the late nineteenth century together, with the Quranic school and khanqah after numerous instances of fire and rebuilding. Associated with the Halveti sect, followed by the Naqshband sect, the khankah was rectangular in plan, with fifteen rooms arranged on either side of a long arcaded corridor. There was a small fountain at the center. The original library is also non-extant, although many of its books, manuscripts, and waqf and court documents were transferred to a new site near the Hunkar Mosque. The Europa Hotel now stands in place of the original stone khan that was constructed along with the mosque and torn down during the Austrian siege in 1912. The public baths have recently been refashioned as a nightclub. To the east of the mosque, clustered together, are the domed masonry tombs of Gazi Husrev Bey and Murad Bey. An Arabic inscriptive plaque above the entrance dates the Gazi Husrev Bey tomb to 1541 (948 A.H.). A Turkish inscriptive plaque above his tomb dates Murad Bey's death to 1545 (952 A.H.). The tombs are octagonal and hexagonal in plan, respectively. A clock tower erected in the seventeenth century would have adjoined the soup kitchen. The one that stands today was rebuilt by the Austrians using a British clock.

Damaged by shells during the Bosnian inter-ethnic war of 1992-1995, the mosque was restored heavily in 1996 with funds supplied by the Saudi Government. During this restoration, the interior was stripped of its historic decoration in accordance with Wahabi ideals of Islam, causing an international outcry. It is currently being restored to its original state by a local team of conservation specialists guided by Nihad Cengic. 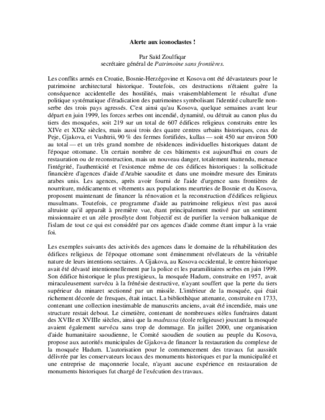