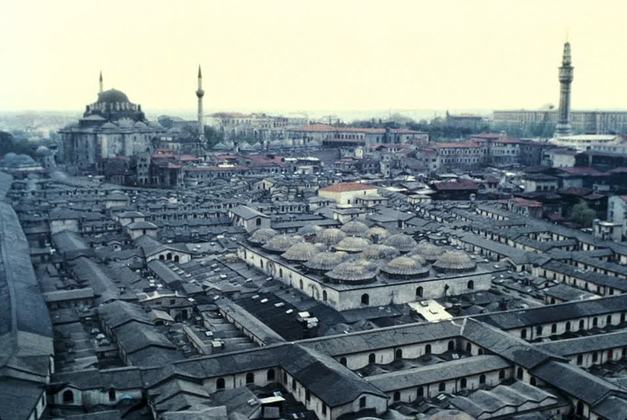 Share
Kapaliçarsi or the Covered Bazaar is the collective name given to two bedestens and the series of vaulted commercial streets that surround them, located between the Nuruosmaniye and Bayezid Mosques north of Divanyolu, the main road traversing the historic peninsula heading towards Edirne (Adrinople). It is located at the northern edge of a larger market neighborhood that occupies the southern hillside of the Golden Horn where commercial ships arrived with their loads. From here, the merchandise was distributed to the hans and wholesale markets for distribution throughout the city. Some of these raw goods made their way up the hill to the artisan workshops of the covered bazaar whose streets are named after its artisans: slipper-makers (terlikciler), shoe-makers (kavafcilar), mirror-makers (aynacilar), wash-cloth makers (keseciler), fez-makers (fesciler), comforter-makers (yorgancilar), silk-thread makers (kazazcilar), polishers (perdahcilar), fur-makers (kurkculer), just to name a few.

At the heart of the Ottoman bazaar are two bedestens, or domed masonry structures designed for safe storage and sale of luxury goods, that were built by Mehmed II (1451-1481) following the conquest in order to revive trade and provide income for the newly converted Hagia Sophia Mosque. Byzantium also had a central market with streets allocated to trades and crafts; however, its exact location and its state at the time of the Ottoman conquest are not certain. It is equally difficult to identify what stood on the site prior to the Ottoman reconstruction. The two bedestens, built less than fifty meters apart facing two different directions, were quickly surrounded by shops and vaulted arcades; scholars estimate that the bazaar had reached a third of its current size by the end of Mehmed II's rule.

The covered bazaar has gone through many fires and earthquakes, following which it was rebuilt and expanded in an ad hoc fashion. Markets surroundings the bedestens were destroyed by fire in 1546, 1589 and 1618. A fire in 1652 originated in the Old Bedesten and a conflagration destroyed the entire city including the markets in 1660. In 1695 and 1701 fires originated again in the Old Bedesten; the wooden vaults of the surrounding streets were converted to masonry in the following restoration. The fire of 1750 damaged the market and was followed by janissaries looting the site. Repairs were conducted after the 1766 earthquake and fires of 1791 and 1826. Mahmud Celaleddin Pasa (1839-1899), the Minister of Public Works under Abdülhamid II, re-organized the covered market after the 1894 earthquake damaged its structure and vaults. Its size was reduced through removing vaults and detaching hans and new gates were installed on major routes. The structure was reinforced with iron and the vaults were decorated with arabesques. Repairs were conducted in the five years following an earthquake in 1954 and the interior was repainted in 1980. Today, the bazaar retains its 1894 boundaries enclosing 61 streets in an area of 30.7 hectares.

The Old Bedesten (Eski Bedesten, Bedestan-i Atik), also known as Cevahir Bedesteni (Jewelers' Bedesten), Ic Bedesten (Inner Bedesten) or Big Bedesten (Buyuk Bedesten), is located at the center of the covered bazaar, oriented slightly off the east-west axis. It consists of forty-four masonry cells (mahzen) around a rectangular courtyard measuring 45.3 by 29.4 meters, enclosed with fifteen domes in three rows. The two rows of eight piers supporting the roof are crowned by small cupolas on the exterior. An outer envelope of 56 shops covers its walls. A majority of the bazaar streets are aligned with the walls of the Old Bedesten, and streets emanate from the arched gates located at the center of each facade. The interior is lit solely from windows at the upper section of the walls, linked by a wooden catwalk. In addition to jewelry sales and auctions for the slave trade (outlawed in 1847), the Old Bedesten was also used by all merchants of the covered bazaar as a safe deposit for money and precious goods. Its floor space is occupied by a large number of small wooden stores today.

The Sandal Bedesten was built later to house the fine fabric trade and is also known as the New (Bedestan-i Cedid) or Small Bedesten (Kucuk Bedesten, Bezzaziye-i Sugra). Located to the southeast of the Old Bedesten across from the Nuruosmaniye Mosque (c. 1755), the Sandal Bedesten is a simple walled enclosure measuring 38.8 by 32 meters, covered by twenty small domes in four rows that rest on twelve piers. Entered from gates at the center of each facade, the bedesten is surrounded by an irregular fabric of masonry stores on all sides. Both the Old and Sandal Bedesten have rubble stone walls, brick domes, stone piers and brick arches tied by juniper beams. Their heavy iron doors are embellished with nails.

The covered bazaar is entered from four main gates located at the end of its two main streets, the north-south Yaglikcilar (oil lamp makers) Street and the east-west Kalpakcilar (fur hat makers) Street, which intersect near the southwest corner of the bazaar. Kalpakcilar Street connects the Bayezid Mosque and Bayezid Square to the west with Nuruosmaniye Mosque to the east; the gates at these locations were added during the 1894 renovation and bear the royal monogram of Abdulhamid II. The gates allowed the entire bazaar to be closed down after work hours when watchmen hired by the guild surveyed its streets at night.

Although the structure of the covered bazaar has been largely maintained, its function and administration, as well as the nature of its goods and the interior architecture have been transformed beginning in the second half of the nineteenth century. By the 1960's, changes in Turkish industry and economy and in the urban demographics of Istanbul had effectively replaced the traditional craft workshops with western-style boutiques and tourist shops, which constitute the bulk of the trade in the bazaar today. The stores, traditionally, consisted of open displays separated by curtains or thin wood partitions that were enclosed with vertical shutters at night. Most stores are now permanently enclosed with illuminated glass storefronts; while posting signage in alleyways was outlawed after the 1980 restoration. The important role of the medieval guild (lonca) organizations in the administration, maintenance and protection the bazaar is now inadequately performed by a weak multitude of bazaar associations. 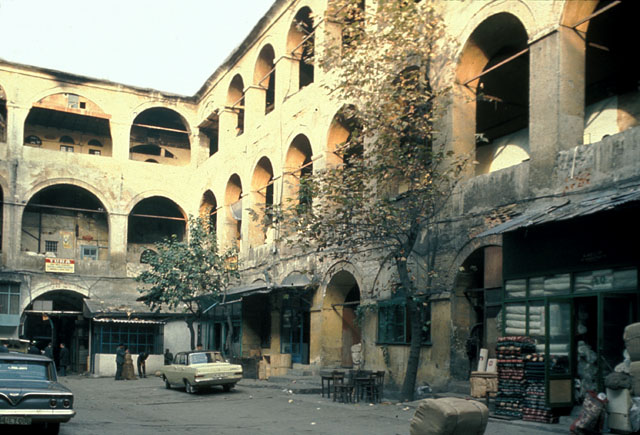