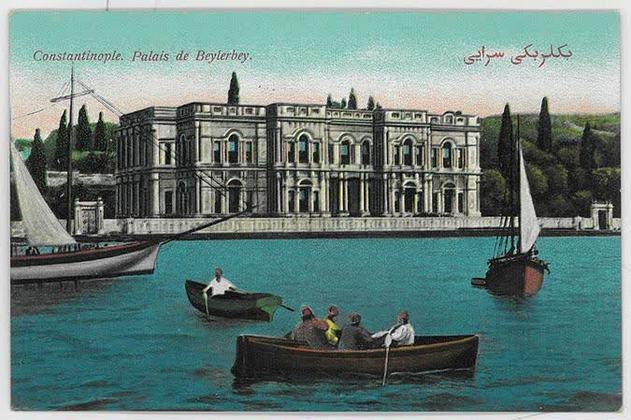 Share
The Beylerbeyi Palace is located along the Anatolian coast of the Bosphorus at Beylerbeyi, north of Üsküdar.

On this imperial coastal estate that rests on the woody Çamlica hills, a Byzantine settlement is known to have existed as early as the sixth century when Emperor Constantine II (578-582) erected a church with a golden cross (stavros) that gave the area its name. The terraced gardens at Istavroz, known as Istavroz Bahçesi, were a popular resort area for the royal family. The Sevkabad Pavilion, built by Ahmed III (1603-1617) atop the hill, was used frequently by his successors Murad IV (1623-1640) and Mehmed IV (1648-1687) who came to hunt here. Restored and enlarged by Ahmed III (1703-1730) and Mahmud I (1730-1754), the garden complex consisted of tiled and domed pavilions around a pool, baths, prayer rooms and service structures. Ottoman dignitaries also built mansions here. The name Beylerbeyi, which was not adopted until later, is thought to refer to Mehmed Pasa, the governor-general (Beylerbeyi) of the Rumelian provinces, who built his coastal complex here during the rule of Murad III (1574-1595).

Mustafa III (1757-1774) demolished the estate and sold off its lands. These lands were subsequently acquired by Mahmud I (1808-1839) to erect a summer palace at the Istavroz Gardens. The 'Yellow Palace', designed by royal architect Krikor Amira Balyan, was completed between 1829 and 1832 and consisted of a main building with administrative and harem sections, kiosks, servants quarters, baths, kitchens, cisterns and stables. This wooden palace, praised in the well-known travelers' accounts by Fieldmarshal Helmuth von Moltke and Miss Julie Pardoe, succumbed to fire in 1851 and its site was abandoned until 1864 when Sultan Abdülaziz (1861-1876) ordered the construction of a fireproof masonry palace.

The new summer palace, called Beylerbeyi, is designed by head architect Sarkis Balyan (1835-1899) and his brother Agop Balyan (1838-1875) in French neo-baroque style with a traditional Ottoman plan. It has a rectangular plan with the long side facing the water and consists of six halls and twenty-four rooms on two floors raised on a service basement. The six halls, three on each floor, are lined up along the longitudinal axis from southwest to northeast. State functions are held in the state apartments (or mabeyn) entered from the southwest, whereas the two halls to the northeast with their surrounding rooms constitute the living quarters or harem, entered from the opposite end of the palace. Both sections are preceded by shady gardens with pine, red-leaf beech, and magnolia trees planted around large oval pools. Although a uniform and symmetrical look has been maintained for the waterfront, a tall wall is used to separate the two gardens behind the palace.

Round cascading steps in front of the mabeyn lead into the entrance hall (giris holü), which has a double set of stairs at its rear end that give access to the reception hall above. Both halls are lit with iwans facing the mabeyn gardens to the southwest. The reception hall, also known as the Hall with Mother-of-Pearl, is adjoined by an audience room with luxurious wood paneling known as the Wooden Room (Ahsap Oda) on the seaside and a dining room on the landward side.

A corridor to the left of the mabeyn entrance hall leads into the Hall with Pool (Havuzlu Salon), named after a large oval pool at its center. The Hall with Pool, together with the Blue Hall (Mavi Salon) above it, occupies the center of the building, linking mabeyn with harem. Facing both the sea in front and the landwall behind, the two halls are linked by a double staircase with a skylight on the harem side. The Blue Hall, which is also known as the Ceremonial Hall, is named after its sixteen blue columns with orientalist capitals separating the central space from its iwans and aisles. Its roof is raised on sixteen arched windows that illuminate the hall from above. The Hall with Pool and some of its corner rooms, as well as some rooms adjoining the Blue Hall have naval scenes painted on their ceilings featuring Ottoman ships; the Admiral Room (Kaptan Pasa Odasi) on the ground floor also has furnishings based on the naval theme. Much of the furniture used in the palace was brought from Europe, including crystal chandeliers from Bohemia and vases from Sèvres; a wide collection of Chinese and Japanese vases is also displayed in the palace. The interior decoration, guided by painter Migirdic Civanyan, reflects nineteenth century Ottoman eclecticism, which is a creative amalgam of Western neo-classical styles and traditional Ottoman elements such as the muqarnas, Bursa arch, interlaced arabesques and calligraphic forms. The floors, where not paved with parquet, are covered with straw mats from Egypt over which Hereke carpets are laid. The palace was illuminated by gasworks while no provisions were made for heating during the colder months.

Corridors from the two central halls lead into the living quarters or the harem, which is smaller than the mabeyn and simpler in decoration. It consists of rooms clustered around two small halls, the entrance hall and a central hall above, that are linked with a double-staircase. Some of the rooms appear today as Abdülhamid II (1876-1908) used them while under house arrest from 1912 until his death in 1918, with furniture bearing his monogram or initials. Empress Eugénie of France (1853-1870), during her visit to Istanbul in 1869, stayed at the Beylerbeyi harem; Emperor Joseph of Austro-Hungary, Shah Nasireddin of Iran, Prince Nicholas of Montenegro and Crown Prince Oscar of Sweden were also hosted at this palace.

The gardens and kiosks

A wall close to human height separates the palace and its gardens from the quay. Two sea gates rise above the walls near the mabeyn and harem entrances. Further out, located midway into the garden on each side is a small sea kiosk (Yali Köskü) with a tent-like roof. The kiosks are entered from the gardens through a portico and make octagonal projections onto the quay. Behind, the palace and its gardens are protected by a tall landwall, which becomes a retaining wall for terraced gardens behind the mabeyn. Of the two gates that serve the palace on the landward side, one opens into a tunnel built earlier by Mahmud I that, passing underneath the garden terrace, exits out to the southwest end of the mabeyn gardens. Here, a ramp climbs alongside a tall wall separating the palace from the service and military structures and gives access to the first, second and third terraces to the left and the stables midway to the right.

The garden terraces were originally built by Mahmud II in 1830. The five main terraces of varied width are divided into seven different levels in places and rise up to 35 meters above sea level. The forth terrace has a large pool overlooked by the Serdab and Sari Kiosks, the pool and the Serdab Kiosk were built by Mahmud II. Stairs and ramps, as seen today, were added by Sultan Abdülaziz who also reorganized the gardens in naturalist style. The Serdab or sunken kiosk (Serdab Köskü), also known as marble kiosk (Mermer Kösk), is a three-room marble structure partially buried into the retaining wall of the terrace above. With views out to the pool in front and the Bosphorus beyond, the kiosk is designed to provide solace from the summer heat; a central fountain, linked with channels to two wall fountains at either end of the main room, humidifies and cools the marble interior. Located at the same level to the east of the pool is the Sari or yellow kiosk, a two-story structure with a basement, oriented to views of the lower Bosphorus and the Çamlica hills above. The stables (Ahir Köskü), the only remaining equestrian structure in an Ottoman palace, is a long rectangular building with an octagonal entrance hall projecting outward at the center. Entered through a broad pair of glass doors, the entrance hall leads into the brick-paved main space with a small marble pool and twenty stalls. Paintings of horses decorate the ceilings of the kiosk entrance hall whose arched windows resemble horseshoes.

Many of the palace service structures, such as the kitchens, have not survived. Sections of the larger gardens, including the deer woods, were given to nearby schools while some small structures once found in the gardens have not survived: the Sultan's or Hünkar kiosk (Hünkar Köskü), the music pavilion (Muzika Dairesi), the deer house (Geyiklik), the lion house (Aslanhane), the dove cote (Güvercinlik) and the bird pavilion (Büyük Kusluk). The palace baths up the hill have been demolished to make way for road expansion. Today, the remaining palace buildings stand in the shadow of the cross-continental Bosphorus Bridge built in 1974; the supports for the colossal suspension bridge are situated immediately below the stables. The palace complex is flanked by the dormitories of the guards (Hamlacilar Kislasi) and the military barracks and soup kitchens built by Abdülhamid I (1774-1789) down the Bosphorus, and an old residential neighborhood is found to its north. 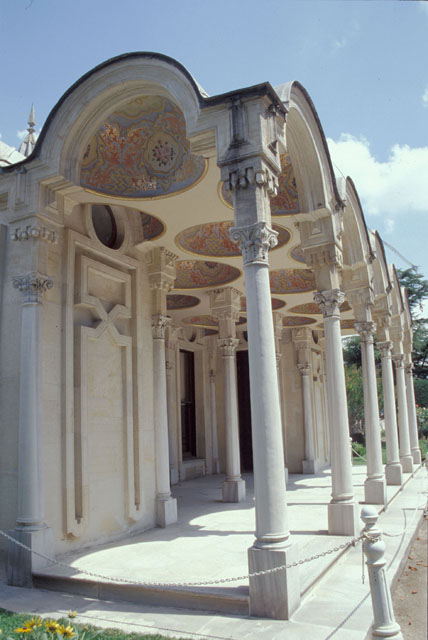