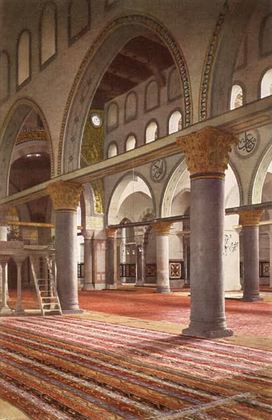 Share
The term the "farthest mosque" is considered in Islamic tradition as the general name for the precinct of Haram al-Sharif ("The Noble Sacred Enclosure") in Jerusalem, as well as the specific name for the congregational mosque located at its southern edge.

The contemporary congregational mosque of al-Aqsa is a result of different stages of construction and renovations. It is usually agreed upon that 'Abd al-Malik (685-705), the Umayyad Caliph who was the patron of the Dome of the Rock, started the construction of al-Aqsa Mosque at the end of the 7th century. A major building phase took place during the time of the caliphate of his son, al-Walid (709-715). The building suffered from several major earthquakes and was renovated and reconstructed during the Abbasid period by Caliph al-Mahdi (775-785) and possibly by Caliph al-Mansur (754-775). A further reconstruction was executed during the Fatimid period, in the 11th century. During the Crusader Kingdom of Jerusalem the mosque was considered as Templum Salomonis (Royal Palace of Solomon) and it served as the palace of the Kings of Jerusalem and later as the dwelling place of the Knights Templars. At the same time the Dome of the Rock was regarded as the Templum Domini (The Temple of the Lord). Moreover, several major restorations are known to have taken place during the 14th and 20th century.

The mosque consists today of a seven bay hypostyle hall with several additional small halls to the west and east of the southern section of the building. Unlike most hypostyle-style mosques the building does not have a clearly delineated courtyard unless one considers the whole Haram as its court. It is capped with a silver dome, made of lead sheets, which together with the golden dome of the Dome of the Rock, formulate the icon of the Haram in Jerusalem.

Burgoyne, Michael H. 1976. A Chronological Index to the Muslim Monuments of Jerusalem. In The Architecture of Islamic Jerusalem. Jerusalem: The British School of Archaeology in Jerusalem. 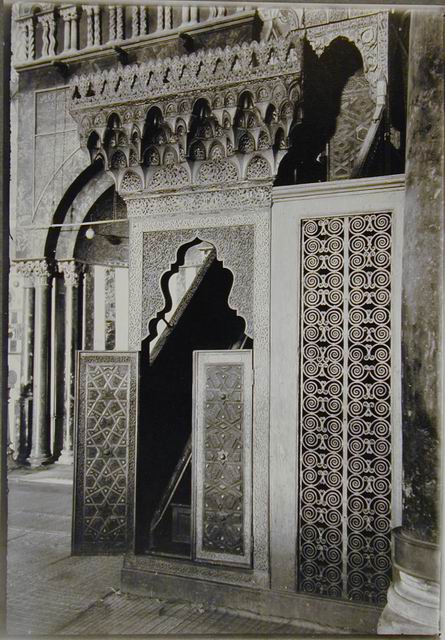