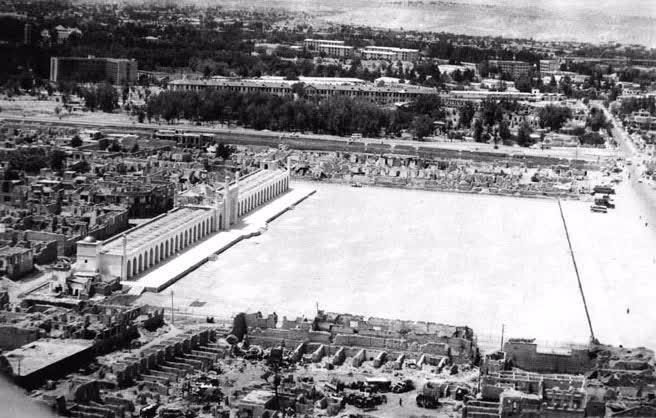 The large plot of land where the Eid Gah congregational mosque is currently located was originally an open green space used by the inhabitants of the Bala Hissar (Upper Citadel) of Kabul for public prayer during key religious festivities. The site was defined by the Joy‐e Mastan (stream) to the west, the Kabul river to the north, and the Baghe Urdo (Military Garden) to the west.

The founder of the modern state of Afghanistan, Ahmad Shah Durrani led the prayer of Eid‐al‐Adha on this site in 1756 and the area remained without obstructions until 1869 when Amir Sher Ali Khan built the first mosque, referred to then as the Chaman mosque (mosque of the lawn/open grounds) , on the western limits of the site. In addition to several large jirgas (consultative congregations) convened within the site, it is believed that the order to commence the second Anglo‐Afghan war was ratified within the mosque in 1878.

The mosque was expanded to its current size and renamed as the Eidgah mosque by Amir Abdur Rahman Khan, with his eldest son Amir Habibullah Khan laying the foundation stones for the Mihrab (prayer niche) in 1893. The site on which the mosque was to be built measured approximately 300 meters in length and 150 meters in width (area: 4.5 hectares). Employing skilled masons under Mohammad Akbar work on the mosque began in April of 1894. Built using stone, fired brick, and lime mortar, the one‐story structure was completed 3 ½ years later in October of 1897.

The layout of the Eidgah mosque consists of two parallel rows of domed spaces laid out in a north‐south orientation, reaching a total of 230‐meters in length. With a total of 76 smaller domes, divided equally into 2‐rows of 19 linear domed spaces to the north and a similar number to south of one large central (13‐meter high) domed space containing the main mihrab. Together with two stair cases at either end of the building, the total built area of the mosque is approximately 2800m2. Sources write that the remaining area of the site was enclosed by a low wall with an entrance gate built opposite the central domed space. The internal open square was made into a garden and planted with fruit trees, willows, cedar and large plane trees.

As one of the largest congregational mosques in Afghanistan, additional Tarawih prayers were held within the building during Ramadan, culminating in the Eid prayers when Amir Abdurahman Khan performed ritual prayers together with members of his court, notable nobles, and high profile governmental officials. The beginning of Eid was marked by the firing of a 21 canon‐gun salute.

In 1919, Amir Abdur Rahman’s grand‐son Amanullah Khan ordered the start of the third Anglo Afghan war in the company of hundreds of local leaders from under the main Iwan of the Eidgah mosque. The short‐lived war resulted in the Rawalpindi treaty that ended the short‐lived conflict and returned the right to govern its external affairs to the Afghan monarchy.

The Eidgah mosque was repaired during the reign of Nadir Khan (1929‐33) and a large open terrace was added to the length of the eastern elevation of the building. During the Soviet occupation in 1986, trees were cut down and the garden area was paved with concrete slabs in order to transform the site into military parade grounds. During the internecine post‐soviet civil conflict of the early 1990’s, the mosque was damaged as it was located in an area of intense conflict. However, while adjacent buildings were damaged to the extent that only small remnants of their previous structure remained, the Eidgah mosque was miraculously spared serious and extensive destruction.

In the past decade, the building has been repaired and repainted with a layer of concrete added to the roof as water‐proofing. Metal framed reflective glass doors have been installed within the deep arches of the main elevation of the building, blocking its open arches and enabling larger groups of people to pray within the mosque. While the Eidgah mosque is closed for daily prayers, the building is used to hold prayers related to funerary functions and the site continues to be the main collection area for pilgrims travelling on the annual Hajj. Initial plans to construct permanent dormitories on the grounds of the mosque for Hajjis have been abandoned, yet several new constructions built over the past decade – including ablution blocks – remain within the site.

In April 2016, a large explosion aimed at the National Security Directorate, located directly to the north of the site, resulted in extensive damage to the metal framed glass doors built within the arches of the mosque. The remains of these doors have now been removed. 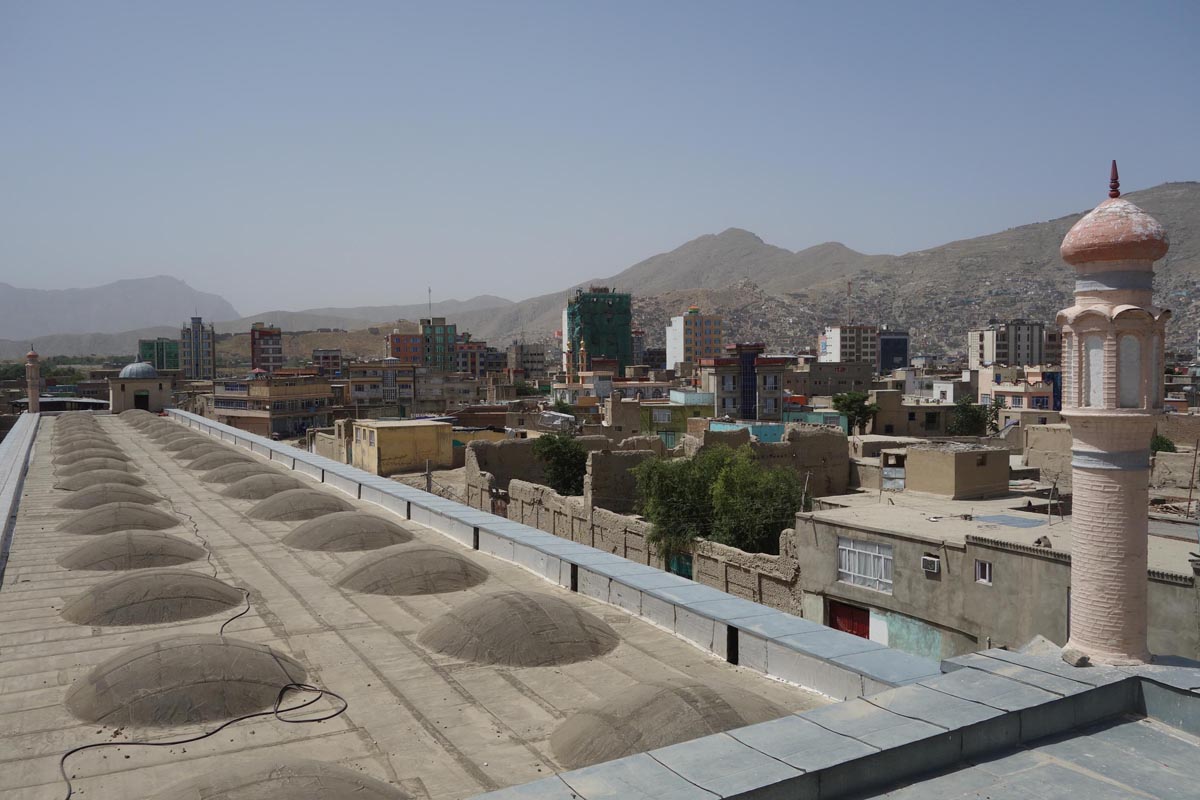