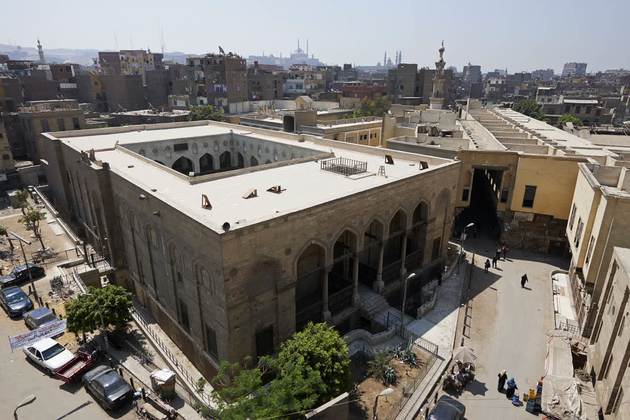 Share
The mosque of al-Salih Tala'i', built by the Fatimid vizier al-Salih Tala'i' ibn Ruzzik in 1160/554-555 AH during the caliphate of al-Fa'iz, is the second extant Fatimid mosque to be built by a vizier, the first being that of al-Aqmar. Originally it was conceived as a shrine to house the head of al-Husayn, which was brought to Cairo from its shrine in Ascalon by the vizier when it was threatened by an impending attack from the Crusaders. But the caliph instead kept the relic in a shrine in the Fatimid palace, which became part of the Mosque of al-Husayn when the palace was destroyed.

The mosque's intended use as a shrine for a Shi'i martyr may account for the introduction of an entrance portico consisting of five keel arches, a feature unique among Cairene mosques. The prayer hall consists of three aisles which run parallel to the qibla wall; the three other sides of the courtyard have one aisle each. The exterior walls are built of stone; the interior arcades are formed by brick keel arches carried on columns with spolia capitals. The arches are framed by a continuous band of Qur'anic verses executed in a floriated Kufic script (Kufic script on an arabesque background). The arches display wooden tie beams, which still show their original carving. Similar carving can also be seen on the wooden tabliyyas or impost blocks between the arches and the column capitals.

The wooden minbar was added by the Mamluk Amir Baktimur al-Jukandar in 1300, and is the second extant Mamluk minbar in Cairo after that of Husam al-Din Lajin built for the Mosque of Ibn Tulun in 1296. Behind the pulpit is a rectangular opening framed by stucco ornament and closed by a bronze grille. This opening is the termination of a rectangular vertical shaft which runs upwards in the thickness of the wall to the roof, where it was once covered by a hood with a sloping roof. Its sides were closed except the one facing north, which traps the prevailing breeze and deflects it downwards. This is the earliest extant example of a malqaf (wind catcher) in Cairo.

The carving on the inner side of the wooden door of the main entrance is a 1935 replica of the original door, which was moved to the Museum of Arab Art between 1887 and 1899. The outside of the original door is faced with geometrically decorated bronze plates which date to 1303 when the mosque was restored after an earthquake. This plating may be the earliest occurrence of such a technique in Muslim Egypt.

This is the second earliest extant example of a "suspended mosque" after that of al-Aqmar, for it is built above shops that comprise part of the waqf. 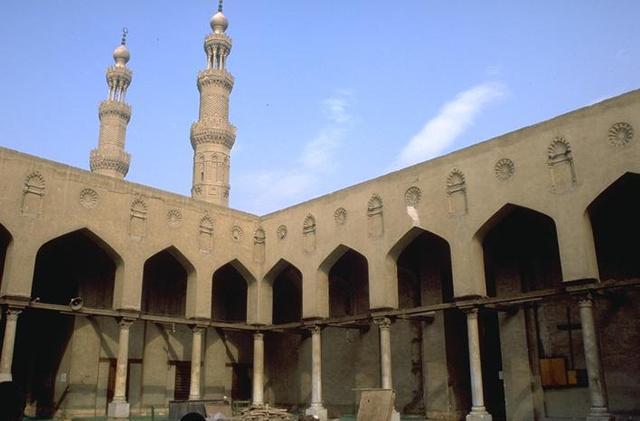