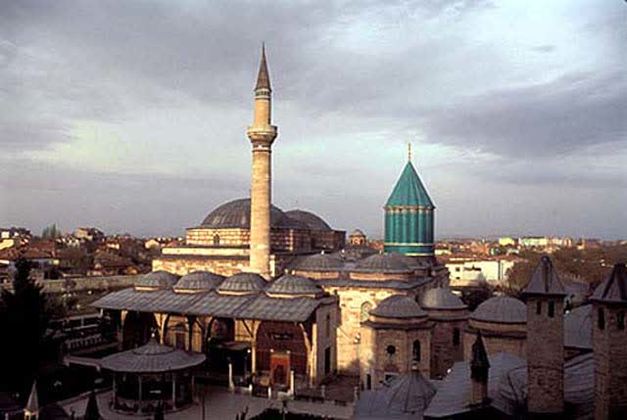 Share
The green-domed mausoleum of Sufi mystic and poet Jalal al-Din Mohammad al-Rumi (1207-1273, known as Rumi or Mevlana) is at the heart of the convent in Konya that includes a mosque, ritual hall (semahane), dervish cells and kitchens in addition to numerous other tombs and cemeteries. The site, a royal rose garden to the east of the walled city, was a gift in 1228 from the Seljuk sultan to Mevlana's father, theologian Baha al-Din Walad of Balkh (d. 1231), who chose to settle in Konya after his long flight from the Mongol army then approaching his hometown. Born in Balkh, Mevlana studied in Aleppo and Damascus and continued his father's teachings in the Seljuk madrasas of Konya. He died in 1273 and was buried next to his father in the rose garden. His successors, and in particular his son Sultan Walad (or Veled), established and developed the Mawlawiyya order of whirling dervishes based on the philosophy outlined in his masterpiece, the Masnavi.

The earthen graves of Mevlana and his father were covered soon after with a lavish shrine, and a takiyya was built around the tombs to house the Mawlawi brotherhood. Rebuilt and enlarged over the Karamanid and Ottoman periods, the takiyya (dergah or tekke) in Konya functioned as the center of Mawlawi teaching until 1927, when it was closed down by a new Turkish law banning the operation of takiyya and zawiyas. It was re-opened two years later as the Konya Museum of Antiquities, and renamed Mevlana Museum in 1964 with the introduction of new exhibits conveying the daily life of dervishes. The historic neighborhood around the complex, including wooden mansions of the Çelebi (leaders of the convent) to the north of the convent, was demolished in the mid-twentieth century to create parklands around the museum and the adjoining Selimiye Mosque (1566). The complex was extensively restored between 1983 and 1987.

The first tomb built over Mevlana's grave, a simple domed structure, was commissioned in 1274 by Gürcü Hatun, wife of Seljuk vizier Süleyman Pervane and built by Tabrizi architect Badr al-Din. In 1397, Karamanid ruler Ala' al-Din Ali Bey (1361-1398) replaced the dome with a sixteen-sided conical crown covered with green tiles, giving the mausoleum its popular name of Green Dome (Kubbe-i Hadra or Yesil Türbe). The shrine grew with additions over time and reached its current state with the enlargements and redecoration during the rule of Ottoman sultan Bayezid II (1481-1512). His contributions are commemorated with a thuluth inscription on the southern wall of Mevlana's tomb. His grandson, Süleyman I (Qanuni, 1520-1566) is often credited with the construction of the mosque and ritual hall (semahane), which adjoin the northern wall of the shrine.

The domed bays of the shrine, mosque and semahane are part of the same stone structure, divided only by archways blocked by iron grills and wooden partitions. The mosque is entered from a muqarnas portal through the central bay of a three-bay portico facing the courtyard, which bears an inscription from repairs in 1889. The base of the minaret, containing the spiral steps of the balcony accessed from the interior, is built into the southern bay of the portico. Inside, the mosque is covered by a single dome that is carried on pendentives between four grand arches. The qibla wall opens up into the shrine with a twin archway containing a marble mihrab on its central column. Another twin arch, now blocked with iron grills, connects the mosque with the semahane to its east.

The semahane, like the mosque, is covered with a dome about ten meters in diameter and opens into the shrine with two archways. It was enlarged by Abdülhamid II, and contains double-story galleries on the north and east sides, including a cell for musicians (mutrib hücresi). The white-plastered interiors of the mosque and semahane are simply adorned with painted inscriptions from 1887, signed by Mehmed Mahbub of Konya. A series of casements topped with arched windows bring daylight inside the two halls; additional windows pierce the drums of their domes. The mosque contains an exhibition with manuscripts, prayer rugs and the carved wooden door of the semahane. Displays of clothing and caps belonging to Mevlana, his son, and his friend Shams al-Tabriz can be seen inside the semahane in addition to medieval prayer rugs, Sufi musical instruments and other precious objects.

The shrine is entered from the room for tilavet, or the reading of the Quran, which adjoins the east wall of the shrine, south of the mosque portico. It contains an exhibition of calligraphic works. Past the silver doors donated in 1599 by Hasan Pasa (son of Grandvizier Sokollu Mehmed Pasa) is the visitation corridor (Dahil-i Ussak, Kademat-i Pir, or, Huzur-i Pir). The three domed bays of the corridor are enveloped by five bays to the north and east (Kibab-ul Aktab) that contain sixty-five sarcophagi raised on platforms. The second bay from the east holds the sarcophagus of Mevlana and Sultan Veled and is richly adorned with painted arabesques and inscriptions highlighted in gold. It is covered with a painted star-vault below the Green Dome and bound by a low silver cage (Gümüs Kafes) added in 1579. The steps to the crypt are covered with a silver panel (Gümüs Esik) on the floor before the cage. The bay in front of Mevlana's tomb (Postlar Kubbesi) is crowned with an elaborate muqarnas vault topped with a lantern. The white-plastered walls of the remaining bays are adorned simply with large Quranic calligraphy. Six sarcophagi known as the "soldiers of Khorasan," a fourteenth century bronze bowl from Damascus (Nisan Tasi, or "April Bowl") and the oldest surviving copies of Mevlana's works from the thirteenth and fourteenth centuries are displayed along the northern side of the shrine corridor.

The dervish cells enclosing the takiyya courtyard to the north and west were rebuilt by Murad III in 1584. There are a total of eighteen cells with fireplaces, twelve of which are placed on the west and six on the north, all entered from an arcade facing the courtyard. The walls separating some of the cells were demolished and the arcade was englazed to create exhibition halls. Two of the cells are furnished to illustrate the room of the convent supervisor (postnisin) and a typical dervish room, while the other cells contain displays of antique rugs and textiles. A large meeting room (Meydan-i Serif or Hall of Honor), currently housing the museum administration, separates the dervish cells from the kitchen (matbah) at the southwest corner of the courtyard. The kitchen was moved to its current location in 1584 from the northwest corner of the complex. It was renovated in the nineteenth century and contains displays with wax dummies illustrating cooking and meals at the convent.

Enclosed by dervish cells and precinct walls, the takiyya courtyard is entered from three gates; Dervisan Gate (between dervish cells to the east), Hamusan Gate (south) and Çelebiler Gate (leading to the Çelebi mansions to the north). Hamusan Gate, or Gate of the Sealed Lips, refers to the cemetery with the same name which occupied the gardens behind the qibla wall of the shrine. The takiyya courtyard before the dervish cells also had tombstones in caged clusters and was known as the Hadikat-ül Ervah, or Garden of Souls. The tombstones removed from these two cemeteries are now displayed at various locations inside the takiyya courtyard. The leaders of the convent (çelebi) were buried in a cemetery to the east of the shrine and semahane, while their female relatives were buried in a plot north of the mosque (Valideler Mezarligi).

There are five tomb towers of Ottoman notables in the takiyya courtyard, four of which are domed octagonal chambers. The free-standing tombs of Fatma Hatun (1585) and Sinan Pasha (1574) are located to the south of the Hamusan cemetery, which contains the tomb of Hasan Pasa (1573) and a simple canopy tomb belonging to Mehmed Bey (1539). Adjoining the tomb of Hasan Pasa along the shrine's qibla wall is the audience hall of the Çelebi, which opens onto Mevlana's tomb with a window (Niyaz Penceresi). It is now a library with over five thousand books and manuscripts. The octagonal tomb of Hürrem Pasa (1527) adjoins the western wall of the kitchens. Hürrem Pasha, Hasan Pasa and Sinan Pasa served as the governor general of the Karaman province, while Fatma Hatun was the daughter of governor general Murad Pasa.

There are two fountains and a pool inside the takiyya courtyard. The ablution before the mosque was built by Sultan Selim I (1512-20) and repaired in 1595 and 1868. Its canopy, demolished in 1929, was rebuilt in 1988-90 based on the original design. The octagonal pool with its marble spigot was the gathering place for ceremonies on the anniversaries of Mevlana's death. A nineteenth century marble salsabil, originally located near the Hasan Pasa Tomb, is now displayed inside the takiyya courtyard. 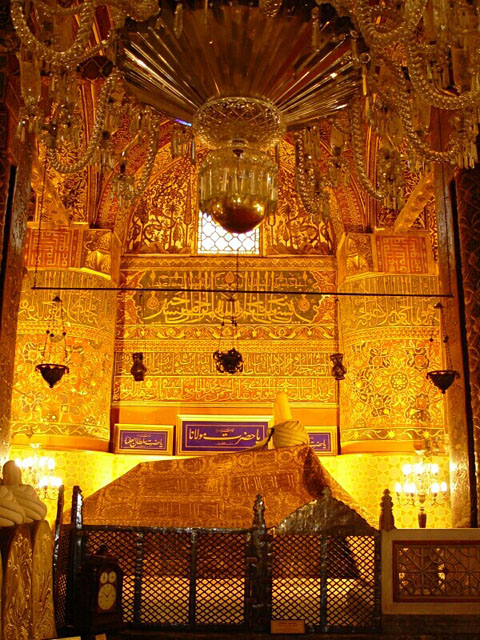