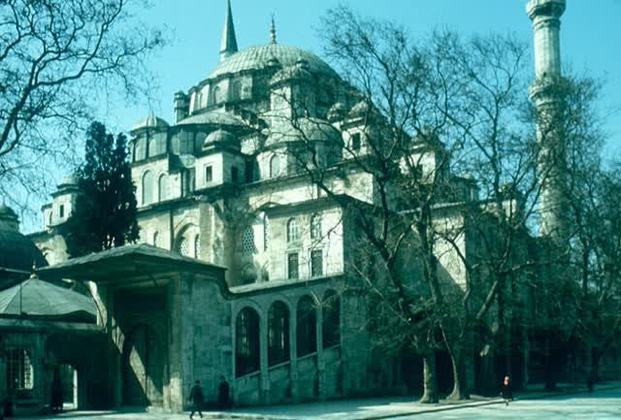 Share
The Fatih Mosque is the sanctuary and central building of the imperial complex built by Ottoman sultan Mehmed II to commemorate his conquest of Constantinople. The architect of the mosque, as of the complex, was a man by the name of Atik Sinan (Sinan the Elder). Primary sources state that he constructed the mosque between 1463/867 AH and 1470/875 AH. Since its construction, the mosque has suffered much damage and has been rebuilt. First, the mosque was restored following some damage caused in the earthquake of 1509/915 AH. The dome of the mosque then collapsed in the earthquake of 1766/1179 AH and was reconstructed entirely in 1771/1185 AH by order of Mustafa III.
The mosque stands at the center of an expansive, open precinct at the center of the symmetrically arranged complex, all oriented 32 degrees east of south in accordance with the qibla. The complex is situated at the top of one of Istanbul's seven hills and on the former site of the Byzantine Holy Apostles Church. The precinct around the mosque was enclosed by walls on the northwestern and southeastern sides, and by a line of madrasas on its lateral (northeastern and southwestern) sides. Two gates in the northwestern and southeastern walls gave access to the precinct, as do a number of gates between the madrasas.
Our knowledge of the original mosque is limited to the accounts and sketches of travelers and chroniclers. According to these sources, the mosque comprised a large prayer hall preceded by a courtyard. The courtyard was rectangular and surrounded by an arcade, three of which remain until today. The prayer hall with a tall dome supported by a semi-dome of equal radius on the qibla side and three colossal arches on the remaining three sides. This ensemble was flanked by three domed bays to the east and west. The new mosque by Mustafa III has also incorporated the portal, the mihrab, and the lower shafts of the minarets belonging to the original structure.
The reconstruction by head-architect Mehmed Tahir was realized in the appropriate historic style, distinct from the rococo fashion seen in the contemporary mosques of Nuruosmaniye and Laleli. The form, however, was altered for the most part. The new mosque is slightly wider than the old one. The courtyard has one main and two side entrances. The main portal is located to the northwest, on axis with the entry to the mosque and the ablution fountain at the center of the courtyard. It is adorned with seven rows of stalactites inside three arches. The side entrances, with cascading steps on the outside, are located where the courtyard gallery meets the taller portico of the mosque. Windows placed low in each bay of the gallery creates visual connection between the mosque courtyard and the lower grounds. The gallery columns are carved of granite, white marble and green stone. The tympana of each window is adorned with Qur'anic inscriptions in white and green marble on the precinct side. Ceramic tiles other inscriptions decorate the tympana of two windows inside the mosque portico.
The prayer hall entrance is marked by the raised dome and the green and white voussoirs of the central bay of portico. The muqarnas portal, maintained from the original structure, has been transformed on the interior with the addition of a balcony above its ribbed semi-vault and a raised terrace (mahfil) with side bays at its front.
The prayer hall has a tall central dome held by semi-domes on all four sides in ways that resemble the classical mosques of the sixteenth century. Four large piers carry the central dome and also section the interior spaces between dome and four bays covered by semidomes. Four small domes complete the corners of the pyramid-like space. The plan is wider than it is deep and is equal in size to the open courtyard that precedes the mosque. The decorative painting of the interior reflects the baroque influence on 18th century Ottoman architecture.
While rebuilding the mosque, the side walls were taken in to accommodate sheltered terraces on either side that have rows of faucets for ablution. A ramp was built on the eastern corner adjoining the marble royal lodge (hünkar mahfili) to allow the sultan enter on his horse. The original Fatih Mosque had two minarets with single balconies. They were rebuilt with two minarets after the earthquake, incorporating the old foundations and the lower shafts. The minarets were refurbished in empire style during the 19th century; their stone spires were replaced by lead spires in 1965, with no alteration to the balconies. The mosque is currently under restoration to repair damage caused by the earthquake on August 18, 1999.
Sources: 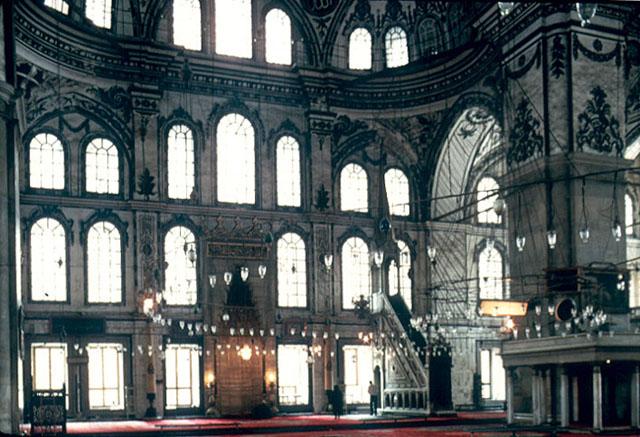