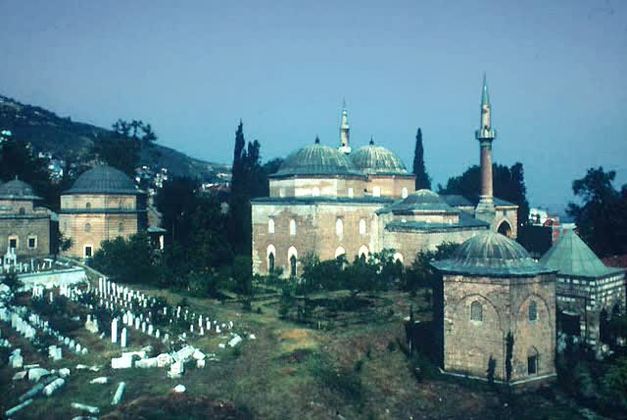 Share
The complex of Ottoman sultan Murad II, known as Muradiye, was built in the years following the completion of the Yesil Complex and consists of a mosque/dervish lodge (zawiye), madrasa (medrese), soup kitchen (imaret), a Koran school for boys (sibyan mektebi), a bath (hammam), and twelve mausolea (türbe) belonging to the Ottoman family. The mosque was completed in 1426/830 AH, and an endowment document naming a number of staff and resources earmarked for the complex dated to 1430/833 AH suggests completion of other buildings before that time.
The mosque/dervish lodge is based on an inverted T-plan with five-bay domed portico at entrance, leading, through a vestibule, to a central hall flanked by iwans on the east and west and a larger iwan with mihrab niche on the south. The central hall and the southern iwan are crowned with domes of equal height carried on stalactite squinches: the former with windows along the drum. Corridors entered from either side of entrance lead to the upper floor and to smaller rooms on the north, ending at the iwans. The mosque has two minarets on the northeast and northwest corners of which the latter was built during restoration by Parvilleé following the earthquake of 1855. The northern façade is adorned with weaving patterns of brick and blue tiles on the upper part of portico and decorative tiles in blue, yellow and white in tympana. The use of blue tiles is more pronounced on the interior, covering the lower part of walls in the southern iwan. The mihrab and the minber are not original.
The madrasa, located to the west of the mosque, is composed of fourteen cells around a rectangular courtyard with large classroom (dershane) on the south side. The entrance on the north is marked by an ornate portal with brick decoration. On the interior, colored tiles adorn the walls of the madrasa.
The mausoleum of Murad II, facing south behind the medrese, was built prior to 1437. It is a single unit crowned with dome resting on four piers and Byzantine columns, with oculus above the marble sarcophagus of Murad II filled with earth. An annex on the east, known as the Mausoleum of Alaeddin, houses four additional tombs including two sons of Murad II. The construction method is three courses of brick to one of ashlar blocks and tiles. A large wooden canopy protects the entrance, its ceiling is embellished with gilded star patterns carved and in relief.
There are eleven other mausoleums belonging to the members of the Ottoman family behind the madrasa and mosque on the south. The single hexagonal unit to the east of the Mausoleum of Murad II is known as Mustafa-yi Atik and houses six graves including the prince Ahmed (son of Bayezid I) and princes Abdullah and Alemsah (sons of Bayezid II). The three other hexagonal units, located to the west of the sultan's mausoleum, belong to princes Mustafa-yi Cedid (son of Süleyman I), Cem (son of Mehmed II) and Mahmud (son of Bayezid II). These mausoleums, with the exception of the tomb of Mustafa, which is decorated with Iznik tiles, are adorned with glazed blue tiles and polychrome painting. The remaining five mausoleums on this side belong to the women of the royal family: Gülsah Hatun (wife of Mehmed I), Mükrime Hatun (wife of Sahinsah son of Bayezid II), Ebe Hatun (midwife of Mehmet II), Gülruh Sultan (wife of Bayezid II), and Sirin Hatun (wife of Bayezid II). The mausoleums named Hatuniyye and Cariyeler, are located on the opposite side of complex, and house the mother of Mehmet II and the odalisques of Murad II respectively. 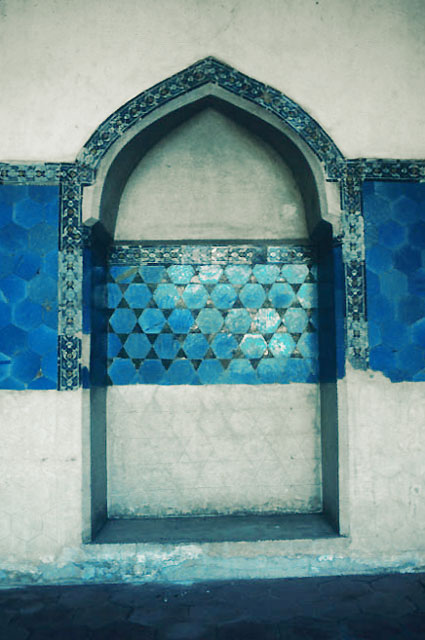