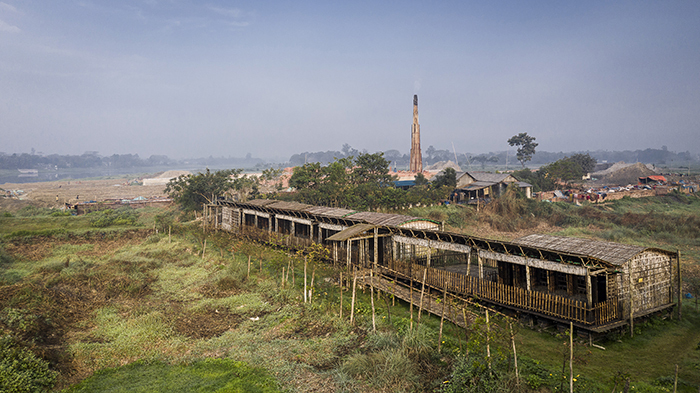 Share
Recipient of the Aga Khan Award for Architecture in 2019.
After four decades of teaching in United Kingdom, Razia Alam returned to her home country of Bangladesh where she established a school for underprivileged children, using her pension funds.
When the lease on the existing premises of this school expired, its founder sought out a site on which to build. The budget restricted her choice to areas not well suited for development. Wanting the school to be near water, she purchased a riverside plot which, it turned out, is submerged in up to 3m of monsoon water for a third of the year.
Rather than disrupting the ecosystem to create a stabilised mound for building on, or erecting a structure on stilts that would have been too high in the dry season, her chosen architect – a lifelong acquaintance – devised the solution of an amphibious structure, anchored to the site, that could sit on the ground or float on the water, depending on the seasonal conditions.
The building footprint was levelled using retaining walls of sandbags with sand, earth and local brick infill, and used tyres fixed atop for cushioning. Bamboo posts sunk 2m into the ground serve as anchoring points for the school’s various independent but interconnected rectangular structures: three multipurpose spaces used mainly as classrooms; office; open-topped platform; toilet/bathroom structure; septic tank and water tank structures; and a single corridor offering access to all spaces. Built of three types of bamboo, they are kept afloat by substructures of used 30-gallon steel drums within bamboo frames.
Chosen for its lightness and durability, the bamboo was purchased in neighbouring villages and drifted along the river to the site. That used for the substructure, anchoring posts and roof was chemically treated to remove any material that could rot. All other elements were waterproofed by applying liquid made from boiled local gaab fruit – a traditional Bangladeshi method. Most of the joints use a rope-tie technique rather than steel wire which would corrode. The classrooms’ bow-arched bamboo roofs, allowing the spaces to remain column-free, required some prototyping to perfect. Aside from a few battery-powered drills, only hand tools were used for the construction.
The carpenter who oversaw the construction and procurement had worked for the client over four decades. Now living nearby, he can attend quickly to any maintenance issues.
Source: Aga Khan Trust for Culture - Aga Khan Award for Architecture 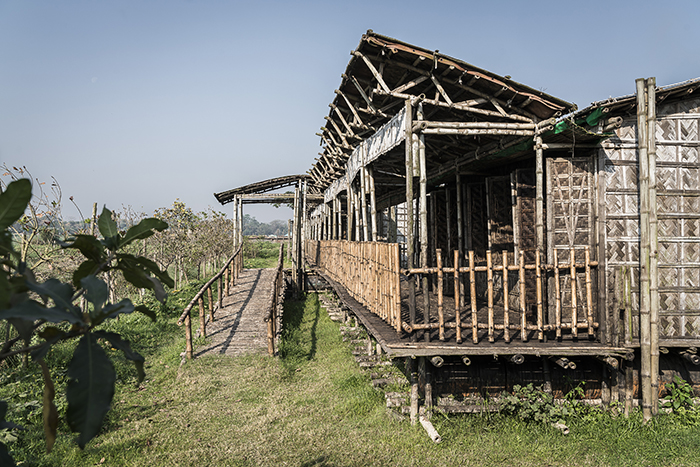