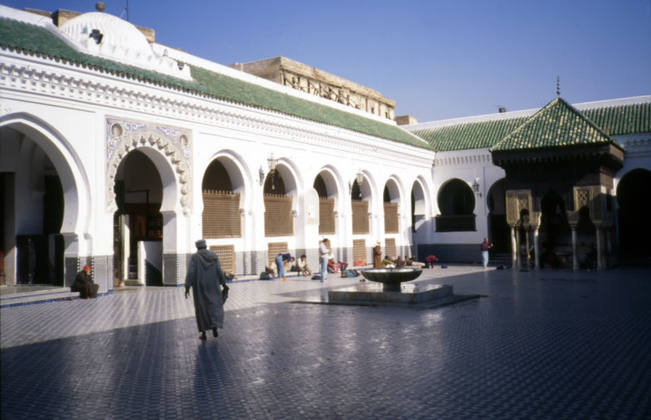 Share
The Mosque of al-Qarawiyyin, near the Suq al-'Attarin, or Spice Market of Fez al-Bali, is one of the world's oldest universities, and among the largest mosques in Africa. Founded as a private oratory in 857/242 AH by Fatima al-Fahri, the daughter of a wealthy Qayrawani immigrant, in the tenth century the mosque became the congregational mosque of the quarter of al-Qarawiyyin. The mosque is surrounded by madrasas, and was a major intellectual center in the medieval Mediterranean. Its prestigious academic reputation may have transcended religious divisions, if, as a popular tradition suggests, Gerbert of Auvergne (930-1003), who would become Pope Sylvester II and who is credited with introducing the use of zero and Arabic numerals to Europe, was once a student at al-Qarawiyyin.

Fez was intimately linked to Islamic Spain politically, economically, and culturally - particularly after 1492/897 AH when Ferdinand and Isabel's expulsion of Muslims and Jews from the Iberian Peninsula brought an influx of refugees into the city. Visual references to the religious and palatine architecture of Islamic Spain are evident in the mosque's hypostyle plan, the 10th century square stone minaret (commissioned and funded by 'Abd al-Rahman III, the first Umayyad caliph of al-Andalus), and by the carved stucco, wood, and glazed tile (zilij) ornamental style derived from the Alhambra. However, al-Qarawiyyin's T-shaped plan, created by an elevated central aisle perpendicular to an aisle fronting the qibla wall, belongs to North African mosque tradition. Stuccoed brick, with stone and tile revetment, and carved cedar wood are the primary materials used for the structure and ornament of the mosque proper.

The Almoravid ruler, Sultan 'Ali ben Yusuf expanded the mosque to its present size between 1134 and 1143. The courtyard's blue and white tile floor, marble ablutions fountain, and the two fountain pavilions, which recall the Court of the Lions at the Alhambra, were added by the Sa'did Sultan 'Abdallah ibn al-Shaikh (r. 1606-1623/1014-1032 AH).
There have been two efforts to rehabilitate the site in the 20th century. The first was completed in 2007, the second 10 years later by Aziza Chaouni. 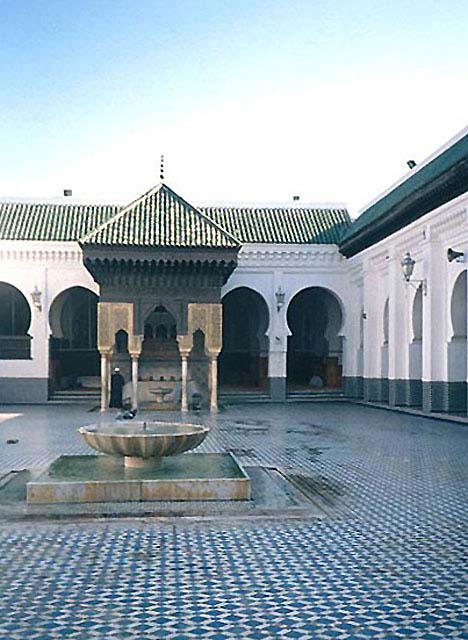