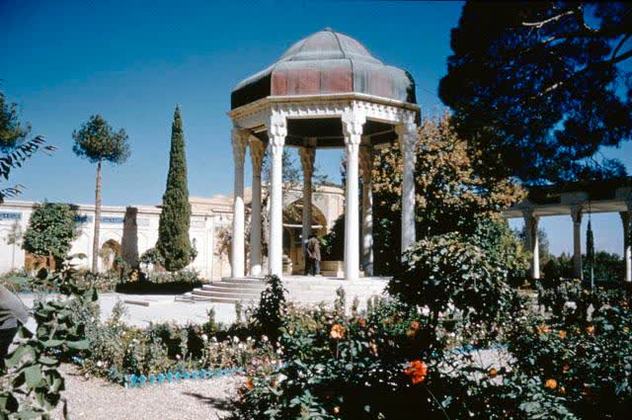 Share
The most celebrated Persian poet, Khwaja Shams-ud-Din Muhammad Hafez-e Shirazi (c. 1320-1389), known by his pen name Hafez, lived and died in Shiraz. Hafez’s collection of poetry, the Divan-i Hafez, is mostly composed of short poems with lyrical and mystical themes (Ghazal), and is commonly considered to be the zenith of Persian poetry.

Hafez was buried in a garden located in Gulgasht-i Musalla, a famous resort on the northern outskirts of medieval Shiraz that was covered with gardens and praised frequently in Hafez’s poems for its beauty and cool breezes that "one could not even find in paradise." According to literary sources, an aged cypress tree said to be planted by the poet stood at the head of the his grave. Historical accounts suggest that in the fifteenth century, under the Timurids, a domed structure and pool were built on the site, of which only the rectangular pool in front of Hafez's grave remained by the first half of the twentieth century. By the sixteenth century, the garden had become a popular Shiraz cemetery called Khak-i Musalla, with Hafez’s grave at its center. In the second half of the eighteenth century, under the Zand ruler Karim Khan, a talar (columnar porch) flanked by rows of rooms used as a teahouse and shelters for dervishes and visitors was added to the south side of the cemetery. In the same period, a garden was laid out to the south of the walled garden-cemetery. The elevated talar was the focal point of the Zand tomb-garden, overlooking the garden and the city on its south side and Hafez’s tomb on its north side.

The present complex was shaped in the 1930s when, on the proposal of Ali Asghar Hekmat (1892-1980), the minister of education under Reza Shah (and a member of the society for national heritage), the tomb-garden went through an extensive renovation. The central talar was extended from both sides, incorporating the four original columns into an elongated colonnaded hall 56 meters in length. The pool and surrounding tombstones (except for a few belonging to well-known figures) were eradicated, and a modern open pavilion was erected over Hafez’s grave in lieu of the modest metal enclosure that had been built in the early twentieth century. The French architects and archaeologists Andre Godard and Maxime Siroux are credited with the renovation plan and design of the modern pavilion.

Oriented toward qibla (southwest), the present complex is composed of two courts separated by a colonnaded hall of twenty columns standing at right angles to the entrance axis of the complex. The south garden consists of a central path with a flower bed in the middle and is lined with cypress trees. Behind the cypresses on either side of the south garden are groves of orange trees, each with a rectangular pool added during the 1930s renovation. The colonnaded hall is accessed by two series of wide steps and terminates in two rooms at its eastern and western ends. In the middle of the north side of the colonnaded hall five steps descend to the inner court, which is square in plan and surrounded on all sides by walls with arched niches and iwans housing private graves. At the center of the north court is the tomb of the poet, crowned by an open pavilion.

The pavilion covering Hafez’s grave is the most remarkable addition of the modern intervention. Standing on a circular plinth with five steps, it is composed of eight stone columns supporting an octagonal frieze topped by a metal roof whose form was inspired by a dervish's hat. The columns bear muqarnas capitals similar to those of the Zand period buildings in Shiraz. Tile inscriptions of Hafez’s poems run along the internal surface of the octagonal frieze. The interior of the dome is decorated with "arch-net" (rasmi bandi) and intricate inlay work (khatam kari). Hafez’s grave is marked by the original marble tombstone from the Zand period, engraved with his own poems in nastaliq script and dated to 1773.

Currently, the tomb-garden of Hafez is a charming spot enjoyed by tourists and the people of Shiraz. 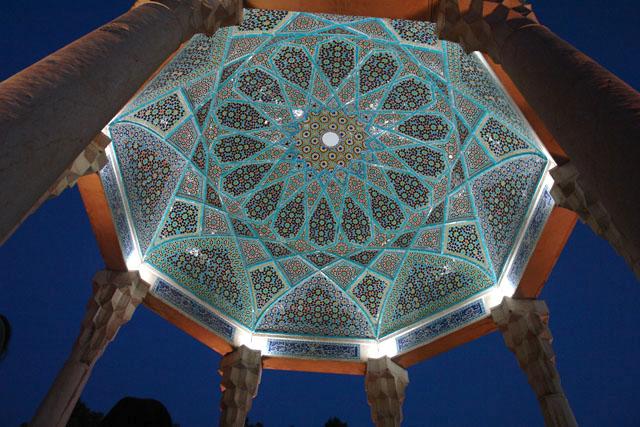