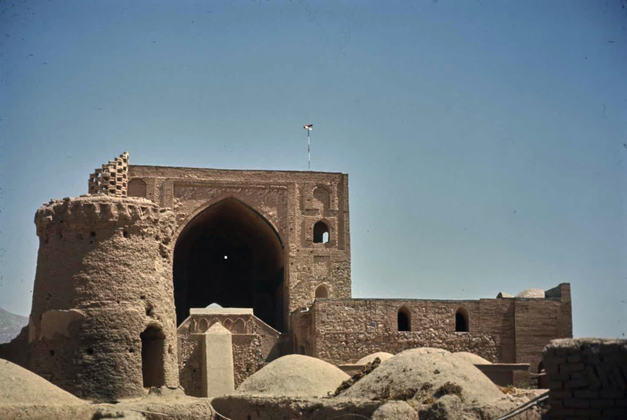 Share
The mausoleum of Pir-i Bakran is located in the small town of Pir-i Bakran, thirty kilometers southwest of Isfahan. Situated in a delightful verdant valley with the Zayandeh River passing to its west, the shrine is located near a holy site for the Iranian Jewish community which includes an old cemetery and a synagogue that dates from the second century of the Common Era, according to a Hebrew inscription.
The Pir-i Bakran shrine is a significant instance of the building program begun at the turn of the fourteenth century with the conversion of the Il-Khanid Mongol ruler of Persia, Ghazan Khan (reg. 1295-1304), and which continued under his immediate successors, Uljaytu (reg. 1304-1316) and Abu Said (reg.1317-1335). Along with the shrines at Bistam and Natanz, the mausoleum of Pir-i Bakran epitomizes the sumptuous architectural patronage of the Il-Khanid rulers, as well as the development of Iranian architecture in the early fourteenth century.
The mausoleum venerates the famous Sufi saint and mystic, Sheikh Mohammad ibn Bakran (d. 1303), who taught at the location. The original space was a small domed chamber, probably used for meditation (chelle neshini), outside of which the Sufi master and his pupils would congregate. As the fame of Pir-i Bakran increased, an iwan was erected to provide shelter for his followers. However, the building was not completed during the Sufi saint’s lifetime, and upon his death in 1303, it became his mausoleum. According to inscriptions, subsequent enlargements and modifications were completed in 1312.
The existing building consists of three loosely arranged components, constructed and gradually redefined over the beginning of the fourteenth century. The oldest part is an small undated domed chamber on the northeast side of the building. To the south of this chamber is the main hall, composed of a lofty iwan oriented toward qibla (southwest) and surrounded on three sides by thick walls containing open galleries on the second and third floors. The final form of the shrine was shaped after Pir-i Bakran's death, when in order to convert the structure into his mausoleum, a low wall was constructed across the open end of the iwan to hold a carved plaster mihrab, and a screen wall was erected at the rear recess of the iwan to define a tomb chamber. All entries were blocked off and a long entry corridor running at right angles to the iwan's main axis was constructed.
The building is accessed from the southeast through a portal that leads to a passageway composed of three bays. The corridor is covered with transverse ribs and is connected to the main hall through a small chamber. Covered with a barrel vault, the main hall is flanked by two arched recesses in two stories on either side. The south side of the hall is blocked by a low a screen wall containing a carved stucco mihrab flanked by tile panels. In the foot of the eastern wall is a rock with an indentation, which, as the Jews hold, was created by the hoof-print of the horse of the prophet Elias when he ascended to heaven. The sarcophagus of Muhammad ibn Bakran is in the northern recess, separated from the main hall by a screen wall covered with star-shaped tiles. A door in this recess opens to the small dark chamber, which also bears inscriptions in carved stucco. The galleries are accessed by a staircase located at the northeast corner of the main hall. The second floor gallery contains a central lofty space (shahneshin) with a muqarnas hood overlooking the iwan. While the gallery of the second floor is open to the interior and exterior, the gallery on the third floor is only open to the outside.
The building is made of rubble-stone with baked brick vaults, a unique feature among extant buildings from the Il-Khanid period that is reminiscent of the Sasanian building tradition. The exterior surfaces are coated with plain plaster, except for the surfaces surrounding the arches on the third floor, which bear remains of glazed tile decoration. The interior is extensively covered with plaster incised into a brick bond, with end plugs forming oblique square units of inscription.
The shrine of Pir-i Bakran is also one of the early instances in which star-and-cross-shaped tiles were used on surfaces other than dados. Most importantly, Pir-i Bakran is significant for its elaborate carved stucco decorations, done in a great variety of designs and varying degrees of relief. In the main, these date from the site's second stage of construction when, under a more lavish royal patronage, the site was converted into a mausoleum. Of particular interest is the elaborate mihrab of the south wall, compared by art historians to the mihrab of Uljeitu at the Friday Mosque of Isfahan and the Kermani Mosque at the shrine complex of Torbat-i Jam for its richness of floral and geometric carvings and elegance of composition. The carved stucco inscription band running above the dado was signed by Mohammad Shah Naqqash, who was also probably the building’s chief architect.
There are also two large plaster panels with square Kufic inscriptions on the piers flanking the main hall. The maze-like inscriptions, which are read clockwise from the bottom right, list the attributes of God and the Fourteen Infallibles (the 12 Imams, plus the prophet and his daughter) venerated by the Shiites.
Pir-i Bakran is not only one of the numerous buildings patronized by the Mongol rulers, but also one of the earliest extant examples of buildings directly related to Sufi practices in the Iranian world. Its unique structural and functional features, as well as its exquisite stuccowork, mark the tomb shrine as significant example of Iranian architecture in the Il-Khanid period.
Sources: 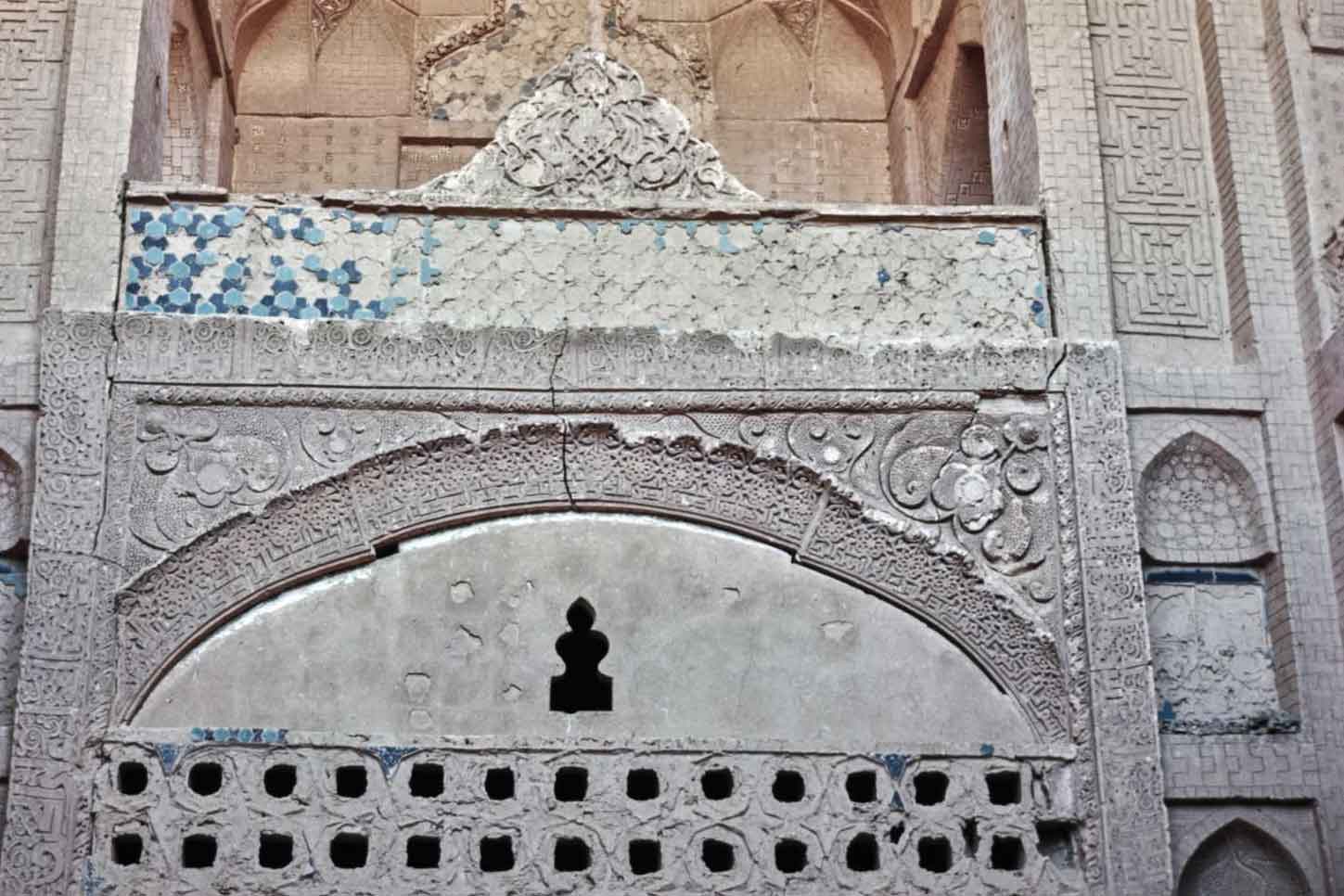