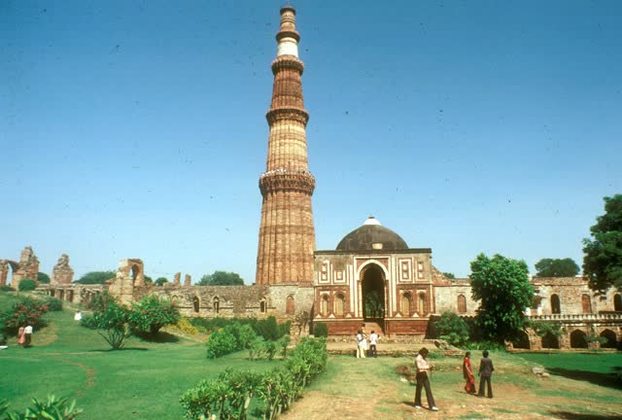 Share
The Qutb complex was built by Qutb al-Din Aybak (reg. 1206 - 1211) who established the first Islamic sultanate in the Indian subcontinent in Delhi in 1192. It is located within the citadel of Qal'a-e-Rai Pithora (Qila Rai Pithora) where Qutb al-Din also set up his administrative quarters and residence. Also known as Quwwat ul Islam, meaning the 'might of Islam,' the Qutb complex was created with the dismantling and reassembling of the 27 existing Hindu and Jain temples on the site. New additions made using the local trabeated construction, as opposed to arcuated or vaulted construction.

The Qutb complex consists of a mosque and two minarets enclosed within a series of cloistered precincts. This rectangular complex measures about 235 m (north-south) by 155 m (east-west) along the exterior. It was entered via four monumental gates along the north, east and south walls, of which only the southern gate (Alai Darwaza) remains. The mosque, known as the Qutb or Quwwat ul Islam Mosque, occupies the southwest corner of the complex. It consists of rectangular enclosures, all the later work of Aybak's successors. The Qutb Minar (minaret) stands in the southeastern part of this enclosure. The unfinished Alai Minar (minaret) stands in the northeastern part of the complex. A tall screen wall with pointed archways runs along the western edge of the precinct, creating a qibla wall for the prayer spaces. In addition to these elements, the complex also contains several smaller buildings: the Tomb of Iltutmish, Ala al-Din Khalji's madrasa, and the Imam Zamin Mosque. Apart from the Qutb Minar, the Alai Darwaza, and the ruins of the Qutb Mosque, little of the Qutb complex stands today.

The rectangular enclosure with the iron pillar in the temple space, which was intended to serve as a ritual ambulatory for the sanctuary, was later used as an assembly court for the Muslims, who faced west for communal prayers. The shafts of the temple columns, decorated with carved human figures covered in bracelets and cable and link chains terminating in bells or tassel rosettes, were maintained. On some of the overhead slabs, representations of Vishnu and Buddha along with lotus motifs are still visible.

Qutb al-Din Aybak later commissioned a maqsura, or screen wall, before the western iwan. Made of yellow and red sandstone, this wall is 2.4 3 meters thick, 45.72 meters long (running along the qibla wall) and 15.2 meters in height. This five-arched screen wall contains one grand central high arch with two smaller ones on either side. All are pointed (ogee) arches, created with the use of corbels by the Hindu masons. These false, or corbelled, arches later evolved into radially cut arches; this evolution in construction can be seen clearly in subsequent additions to the complex. This maqsura was later adorned with Quranic verses in Nakshi letters by Muslim calligraphers.

Iltutmish (reg. 1211 - 1236), upon succeeding Qutb al-Din Aybak, ordered a further eastward extension of the mosque that nearly doubled its size. Two screen walls on the northern and southern sides were added, maintaining its design continuity and symmetry. Iltutmish also added three more storeys to the Qutb Minar, topping it with a cupola. His small tomb, located in the northern extension of the complex, is also considered to be an outstanding: its severe exterior is sandstone, and its lavishly ornamented interior features geometrical arabesques and floral motifs.

The Sultan, Ala al-Din Khalji (reg. 1296 - 1316) took over from Iltutmish and tripled the size of the mosque to accommodate the area's growing Muslim population. The Sultan decided to build another minaret, one larger than the existing Qutb Minar. This new minaret, the Alai Minar, was placed at the northeastern part of the Qutb complex; however, work on this minaret ceased during the first stage of its construction. Sultan Khalji also added a madrasa to the southwestern end of the complex and the Alai Darwaza on its southern end. The Alai Darwaza is a richly decorated gateway, renowned for its use of a bold polychromatic scheme. Three other gates were also added to this mosque extension, two at the eastern wall and one at the northern wall.

The final extension to the mosque was done by the Tughluqs (reg. 1320 - 1399), mainly by Firuz Shah, who added the fifth and the sixth stories to the Qutb Minar. The Tughluqs were then superseded by Timur (Tamerlaine), the ancestor of the Mughals.

The importance of the Qutb complex declined towards the end of the thirteenth century due to two major factors: one, the increasing water scarcity of the capital, and two, the decision on the part of each new ruler to consolidate his political legitimacy by building a new city. The Qutb complex remains a highlight among subcontinental pre-Mughal Islamic architecture. In both the original Hindu temples and the later Muslim additions, the intricate stone carving and calligraphic work stand out. 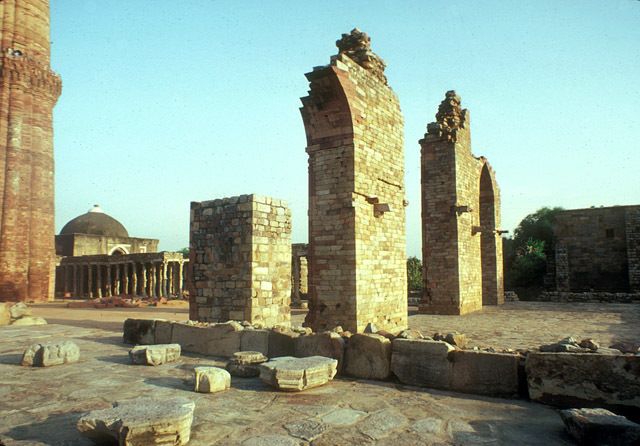