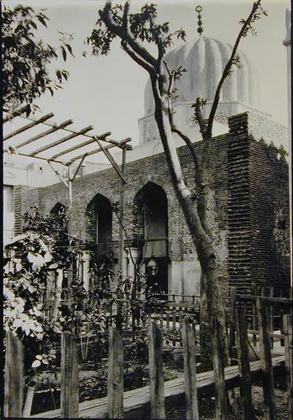 Share
The Mashhad of Sayyida Ruqayya, a mashhad ru'ya (visual memorial) of an 'Alid saint, is dated by an inscription to the year 1133/527 AH. Sayyida Ruqayya was the daughter of Ibn Abi Talib, the fourth Righteously Guided Caliph (Rashidun). Ruqayya came to Cairo with her stepsister Zaynab. Along with Sayyida Nafisa, these women are traditionally considered the patron saints of the city. Ruqayya's shrine is still used as an oratory, a place where people make vows and pray for the saint's intercession. Miraculous interventions are still attributed to her.
The mashhad is noted among other things for its central mihrab, one of the greatest pieces of stucco decoration in Egypt. It comprises a niche surmounted by a shell which is in turn surrounded by an outer scalloped edge, the ribs of which radiate from a medallion in a fashion recalling the niches decorating the facade of the al-Aqmar Mosque.
The zone of transition in the mashhad consists of a two-tiered squinch subdivided into keel-arch niches to form a muqarnas, or stalactite squinch. The space between the squinches is pierced with a trefoil window, the outline of which is identical with that of the squinch, and is subdivided by means of a central Y-shaped framework into three keel-arched openings, thus mimicking the subdivision of the squinch into three niches surmounted by a fourth one. The result is an octagonal transitional zone displaying a unified scheme of alternating windows and squinches both sharing the same outline and both subdivided into keel-arched forms. Each face of the octagonal drum above the transitional zone exhibits a pair of lobed windows with stucco grilles comprising geometric forms.
The layout of this 'Alid mashhad, with a tripartite portico preceding a sanctuary consisting of a domed chamber flanked by two bays, resembles that of the Mashhad of al-Juyushi, the earliest extant structure from the Fatimid period that is designated as a mashhad by its epigraphy. Like al-Juyushi, the Mashhad of Sayyida Ruqayya may also once have had the spatial and hierarchical sequence of portal, courtyard, portico and sanctuary.
Sources: 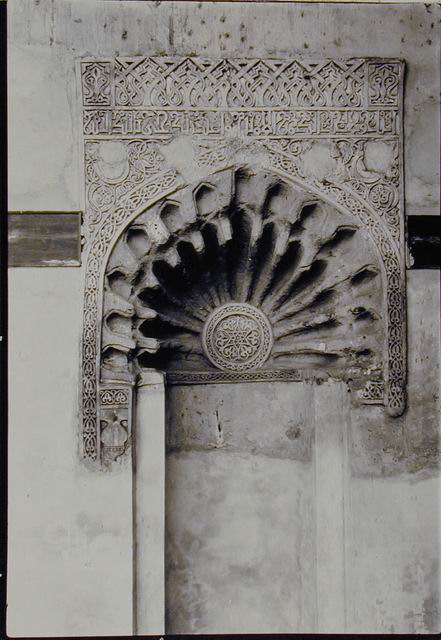