Developing Worlds: Planning and Design in Latin America and the Middle East after WWII 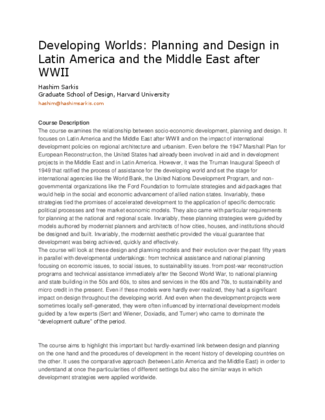 This document is a syllabus reflecting course content developed for "Developing Worlds: Planning and Design in Latin America and the Middle East after WWII," by Hashim Sarkis of Harvard University.

The course examines the relationship between socio-economic development, planning and design. It focuses on Latin America and the Middle East after WWII and on the impact of international development policies on regional architecture and urbanism. Even before the 1947 Marshall Plan for European Reconstruction, the United States had already been involved in aid and in development projects in the Middle East and in Latin America. However, it was the Truman Inaugural Speech of 1949 that ratified the process of assistance for the developing world and set the stage for international agencies like the World Bank, the United Nations Development Program, and non-governmental organizations like the Ford Foundation to formulate strategies and aid packages that would help in the social and economic advancement of allied nation states. Invariably, these strategies tied the promises of accelerated development to the application of specific democratic political processes and free market economic models. They also came with particular requirements for planning at the national and regional scale. Invariably, these planning strategies were guided by models authored by modernist planners and architects of how cities, houses, and institutions should be designed and built. Invariably, the modernist aesthetic provided the visual guarantee that development was being achieved, quickly and effectively.

The course will look at these design and planning models and their evolution over the past fifty years in parallel with developmental undertakings: from technical assistance and national planning focusing on economic issues, to social issues, to sustainability issues. from post-war reconstruction programs and technical assistance immediately after the Second World War, to national planning and state building in the 50s and 60s, to sites and services in the 60s and 70s, to sustainability and micro credit in the present. Even if these models were hardly ever realized, they had a significant impact on design throughout the developing world. And even when the development projects were sometimes locally self-generated, they were often influenced by international development models guided by a few experts (Sert and Wiener, Doxiadis, and Turner) who came to dominate the “development culture” of the period.

The course aims to highlight this important but hardly-examined link between design and planning on the one hand and the procedures of development in the recent history of developing countries on the other. It uses the comparative approach (between Latin America and the Middle East) in order to understand at once the particularities of different settings but also the similar ways in which development strategies were applied worldwide.

The cases will follow a somewhat chronological order focusing on different types of projects that typify a particular era of development as we move from the immediate post-war period to the present.

These include two projects that were influential in setting the stage for international development practices: Puerto Rico under Rexford Tugwell and the role of architects like Richard Neutra, Klumb, and Casals in formulating the idea of national planning and design; and Greece and Turkey after WWII and the impact that this model had on the shaping of the agricultural landscape in both countries.

We will then go to look at the first World Bank related experiments after the war particularly in Colombia and the projects of Jose Lluis Sert, Paul Wiener and Le Corbusier. In the Middle East we will look at the Eisenhower policies, the Point Four Development Program in Iraq and Lebanon around 1958 and the new settlements by Constantinos Doxiadis.

The planning initiatives would soon be challenged by the realities of urban poverty and unplanned growth. As such new models related to the provision of sites and services and grass roots approaches to planning begin to emerge in the sixties. In this respect we will look at the housing theories of John Habraken, John Turner, Hassan Fathy, and Christopher Alexander and their applications in Peru, Mexico, and Egypt.

We will also look at contexts where national wealth and local initiative would generate other approaches to development. The case study here will be Ciudad Guyana in Venezuela designed by the Joint Center of Harvard and MIT. We will also study the impact of oil transportation on the reorganization of the Saudi desert.

We will examine the role of NGO’s in advancing development from The Ford Foundation and its schools building programs to the micro-credit approach in the work of Arif Hasan in Pakistan.

We will also examine the world heritage sites program of the United Nations and the role of cultural heritage in enhancing development.

Lastly, we will look at several contemporary themes in development, or “redevelopment” as it has been often referred to in present debates, namely sustainability, participation, and post-war reconstruction, focusing in the last theme on the current reconstruction of Beirut.

History, Theory, and Politics of Development: