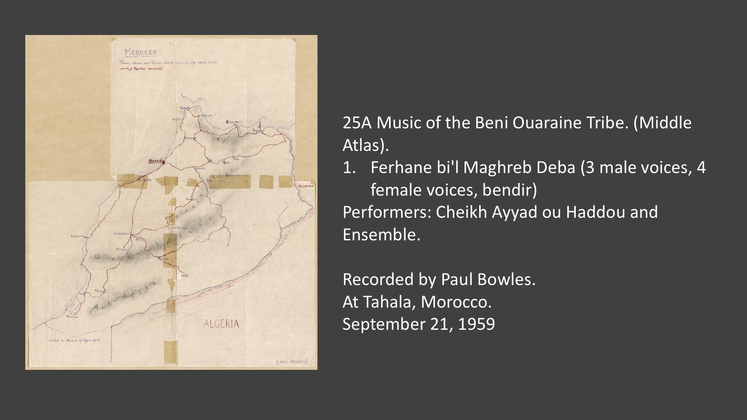 Title
25A 1 Ferhane bi'l Maghreb Deba
Year
1959, Video 2018
Description
Recorded by Paul Bowles at Tahala, Morocco.
September 21, 1959
“As has been remarked earlier, the men have a tendency to place their voices extremely high, certainly higher than comfort allows. The Beni Ouaraine are excessive in this respect: it is impossible to tell the difference between the men and the women, and it is one of the salient characteristics of their music that their mastery over certain limited but subtle aspects of voice control is absolute.
The singing of the Beni Ouaraine came as a surprise to me, inasmuch as I had never heard anything resembling it in Morocco, or, for that matter, anywhere in North Africa. The men sat together along one side of the room, the Cheikh holding the bendir, while the women were grouped facing them along the contiguous wall. I was not expecting to see so many singers, since the katib had told me there would be three “people”. Then I remembered that women are not people, and when the time came to pay the musicians I said to the Cheikh: “Three people. Right? He agreed, and I paid for only three musicians instead of seven. Unfortunately it did not always work in the same advantageous fashion; generally the women have to be paid the same as the men.
In number 1, the men sang simultaneously; in number 2 they alternated, and again in number 3 they sang together.”
- From the notes of Paul Bowles
Country
Morocco
Associated Names
Associated Collections
Related Images/Videos
Dimensions
8'6"
Languages
Arabic, Tamazight
Copyright
Aga Khan Documentation Center at MIT
Source
The Paul Bowles Moroccan Music Collection (AFC 1960/001), American Folklife Center, Library of Congress, Washington, D.C., Courtesy of the Paul Bowles Estate and Irene Hermann / Tangier American Legation Institute for Moroccan Studies
Keywords
music
Medium
M4V
Video
IAA145465