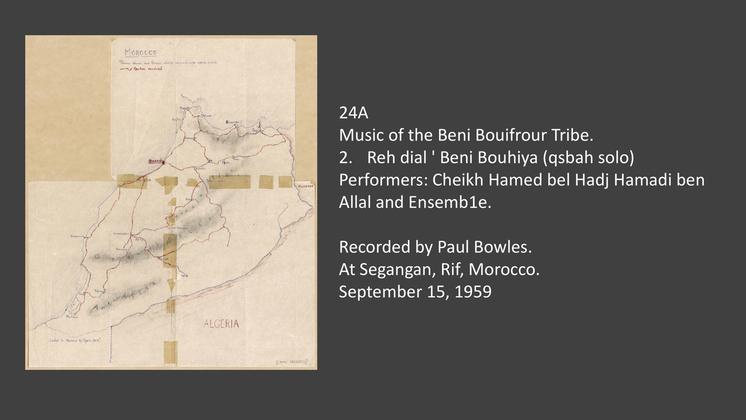 Music of the Beni Bouifrour Tribe.

"I wanted a vocal selection in which one could hear the voices. The Cheikh said that the zamar must play; he did not say why. So I let him play, but seated him at a distance of about thirty feet from the singers. Then I begged the singers to play their benadir as lightly as possible, which they did in number 1, and for the first time, because the Cheikh repeated my order to them, fearing that his zamar would be covered by the racket. It was covered, but by a well-balanced ensemble. He was not pleased by the playback.

Then I asked Boujmaa ben Mimoun to play be a qsbah solo. The Cheikh  Immediately said it was not possible whereupon ben Mimoun agreed that it could not be done. After calling the Caid, who had not heard the beginning of the conversation, and who seem to think that a qsbah could play alone if necessary, I got what I wanted, and was delighted with the results. (This is the music of the loan camel-driver sitting beside his fire at night while the camels sleep. It is a moving experience to come upon the sound in the landscape of immensity and desolation and listen for a long time to the querulous, hesitant cadences. I think, more than any other music I have heard, it is the music which best expresses the essence of solitude.)

As usual we were recording outdoors, and as usual wind came up during the process; by the very end it had reached a high velocity so that the final zamar coda is considerably damaged by its roar. Number 3  was a spirited dance, with everyone leaping in various directions while he played and/or sang. It is impossible to set a level with players rushing at the microphone and away from it; that is one of the main problems in recording in Morocco, - - that in the sudden screaming of both men and women at unexpected moments.

Again and again I have been struck by the similarity of rhythm in Moroccan music to that of our own jazz. There are other similarities, of course, but the rhythm is the most obvious.

The Cheikh was not satisfied at the end of the last piece with merely letting it finish; he had to call out ”Safi!“ (That’s that!). I think the superiority of this reel over the others recorded at Segangan  was partially due to the fact that the players had smoked a certain amount of kif by that time and were ”in”  the music. The problem of whether or not to dispense kif (marijuana) at a recording session is a delicate one, since it is legally prohibited, and invariably there are governmental officials, both civilian and military, present at them. Yet probably 95% of Moroccan musicians smoke the weed when they perform, and smoke it publicly. I found that the best system was simply to offer it to the musicians individually; if they accepted it, that meant that they knew officials would not object. Almost always they accepted.”