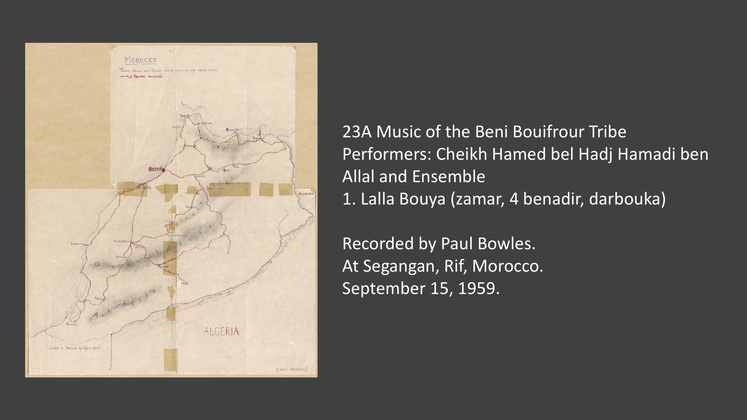 ”Throughout the Rif I had been inquiring bout the zamar, an instrument I had been told about but had only ever seen in photographs. At each place the musicians assured me I should find it in the next region further east. It was not until I got to the extreme eastern edge of the Rif, in Segangan, (Riffian pronunciation: Azrheung-ng'n) that I finally saw and heard the zamar. It consists of two separate reed pipes wired together, each with its mouthpiece and perforations; each pipe terminates in a large bull's horn. The instrument can be played both with and without the horns, which are easily detached. Unfortunately I was unable to get two zamar players, although I did my best.

I had made a special trip from Nador out to Segangan the previous day in order to make contact with the musicians and find a place to record without interference, and at that time had . tried to insist on a second instrument. When I brought up the subject, meaningful glances were exchanged between the Cheikh and the Caid, and the language shifted from Arabic into Riffian; I knew then that I was defeated, and after that my attempts were purely academic. For some personal reason the Cheikh did not want another zamar, and that was that. The next day when I went back to Segangan, there was, of course, only one, which naturally was better than none."