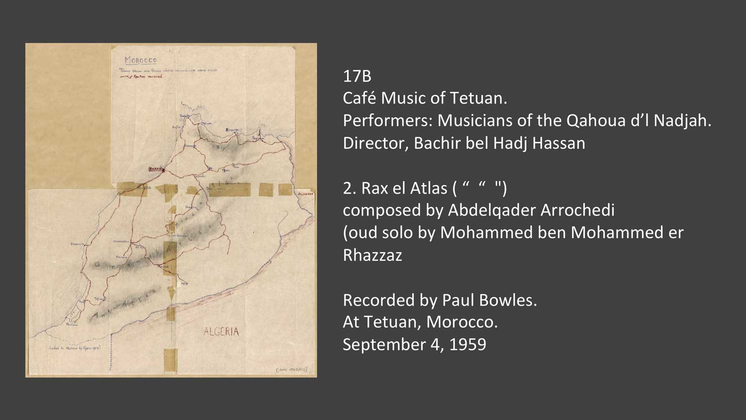 During the time I spent around the Qahoua d’l Nadjah  I learned that the Rax el Atlas  is a great favorite with the habitués . I should say it’s unconscious musical source is andaluz music, although Bacali and the other musicians naturally deny this. For them a song is its words; where the melody comes from and what treatment is accorded it are matters of slight interest to them. Rax el Atlas  Is a popular song in the contemporary Moroccan idiom composed by Arrochedi, and this is Bacali’s arrangement of it.

Note:  It should be understood that the music designated by the term andaluz  is only an extremely distant cousin of the music of present day Andalucía, where the genre was indeed fashioned and developed, but at the time of the Kalifat of Cordoba. It is the only art music Morocco possesses; it too, however, (and fortunately, to my way of thinking,) relies heavily on improvisation, but within a strict art form. I should qualify my statement that the Rax el Atlas uses andaluz  music has its source by explaining that I meant the melodic line in general, and certain specific cadences. The first ten minutes of the reel are devoted to café conversation and tuning of the instruments.

See no. 42 B (Mellaliya)  for a less sophisticated treatment of the same song as El Aarabiya.