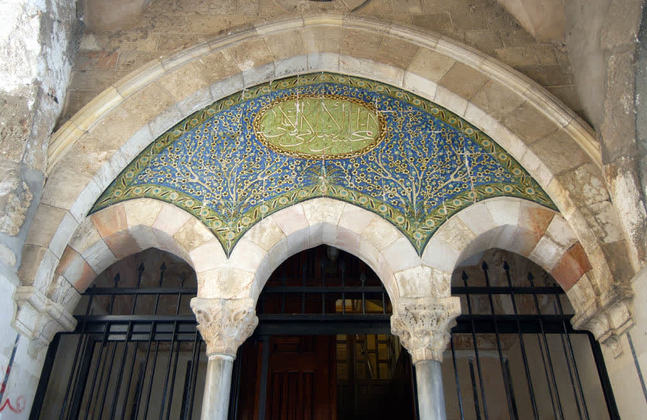 Share
The Madrasa of al-Manjakiyya, built by Sayf al-Din Manjak during the 14th century, rests on the west portico of al-Haram al-Sharif overlooking the gorgeous view of the Dome of the Rock, and its surrounding structures. The founder, Manjak, started as a mamluk (slave) of Sultan al-Nasir, he later advanced in military and political ranks to amir (army commander), a vizier, governor of several cities and in between spent some of his time in the prison of Alexandria after being caught conspiring against the Sultan (the fault for which his brother was executed). The Manjakiyya displays a handsome façade toward the Haram where two double arched windows with voussoirs of black and yellowish stone announce a domed loggia behind. The main entrance used to be through the muqarnas portal in the street Tariq Bab al-Nazir and another entrance, no longer in existence, used to connect the madrasa to the platform of the Haram by means of spiral stone stairway.  The interior arrangement at the present is a result of many alternations and does not give an ordered impression. The original organization was apparently of a conventional Mamluk madrasa arrangement with dwelling units around an open courtyard, and presumably also contained a residential unit for the founder himself for the period of his temporary stay in Jerusalem.

Burgoyne, Michael H. 1976. A Chronological Index to the Muslim Monuments of Jerusalem. In The Architecture of Islamic Jerusalem. Jerusalem: The British School of Archaeology in Jerusalem.
The conservation by the Old City Jerusalem Revitalisation Programme transformed the Madarasa al-Manjakiyya into the offices for the Jerusalem Department of Islamic Awqaf.  All new insertions to the old structure are of a reversible nature.
Source: Aga Khan Award for Architecture