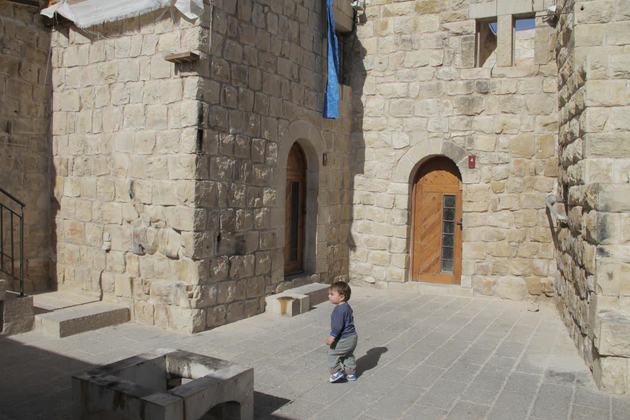 This five-year project, part of a rehabilitation master plan initiated by the Riwaq – Centre for Architectural Conservation and eventually involving 50 villages that have retained a high degree of historic integrity, has transformed the decaying town of Birzeit, created employment through conservation and revived vanishing traditional crafts in the process. Through focusing on towns and villages in the area under Palestinian civil authority where an estimated 50% of the surviving historic structures of Palestine are located and where most Palestinians live, Riwaq realised that it could save much of Palestine’s remaining heritage, and at the same time have the greatest socio-economic impact. Conservation would create jobs, revitalise local workshops and, ultimately, spark interest and investment in historic village centres.

Community involvement was encouraged from the start, including local NGOs, the private sector, owners, tenants and users, all working with the municipality. Five years of work have yielded impressive results: streets have been paved, named and clearly signed; infrastructure upgraded (water) and added to (pipes laid for a future sewer system); facades have been conserved; and public spaces have been created and rehabilitated. Riwaq pursued a policy of preventive conservation to upgrade the public realm and restore select public/community buildings to accepted international standards, coupled with a creative adaptability in replacing sections of wall remain distinguishable from the original structures, without harming architectural coherence. Affordable traditional techniques and local materials were used throughout. Both historic buildings and public spaces have been rehabilitated into community activity hubs. The successful social, cultural and economic revitalisation of Birzeit undoubtedly stands as an inspiring model for the other villages and rural areas in the “50 Villages” programme and beyond.

“The Revitalisation of Birzeit Historic Centre is a dynamic project in which the NGO of Riwaq succeeds in mobilising stakeholders and local craftsmen into a process of healing that is not merely physical but that is social, economic and political. By reversing a process of neglect and erasure within a complex and difficult political context, the project manages to transform not only a neglected historic core but also people’s lives, and restores not only buildings but the dignity of their users. The project offers an alternative to “museified” historic cores and it pioneers the regeneration of Birzeit’s historic centre into cultural infrastructure. It facilitates the reclamation of heritage by the people involved while also allowing them to achieve their self-expressed aspirations. The project is an exemplary dedication to rural heritage that can serve as a model for the 50 villages in which Riwaq is involved, particularly the strategic interventions designed to stimulate long- term development. ”