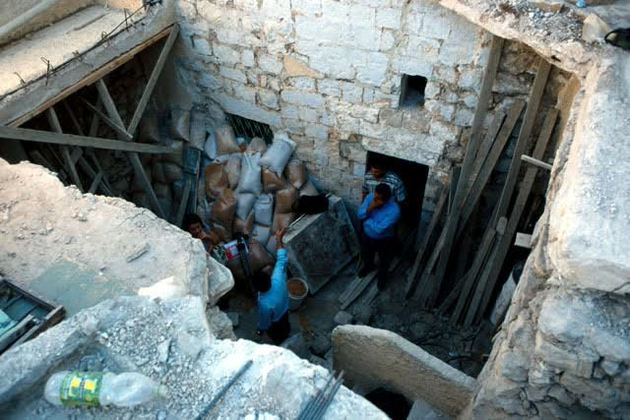 Share
The restoration of Hosh al-Helou, a complex of houses in Area 21, a target restoration area for Welfare Association's Jerusalem Revitalization Program (JRP), has meant visible improvement in the quality of life for its residents, and has set an example for other Old City neighborhoods. The hosh is one of the largest and most densely populated residential complexes in the old city and home for 9 families (82 residents). Most of its parts suffered from severe physical and environmental problems, lack of services, ventilation and sanitation. Hosh al-Helou is one of five hawash in Area 21, located off the strategic east-west road, Tariq Bab al-Sisileh, which leads to the Haram al-Sharif. The project converted 1,000 square meters (one dunum) of rubbish-filled pathways and narrow passages, open sewage drains and outdoor latrines, and 24 poorly ventilated rooms with bulging walls, into normal residential conditions in six months time.
The JRP team adopted a priority problem-solving approach for the restoration, which was accomplished in three phases, dealing with the lack of sewerage and indoor plumbing first. The years of accumulated garbage were also removed; in some cases whole rooms had been filled with rubble over the years because removal was unaffordable. The most popular feature for the community has been creation of public space in the communal courtyard through stone terracing and landscaping.

The project, completed in 2002, comprised restoration of the historic parts, and replacement of inappropriate extensions added by the residents with light, safe structures compatible with the historic context of the complex. The project also included complete rehabilitation and upgrading of infrastructure and landscaping of large empty areas which were meticulously designed to allow families to enjoy the open space and an amenity rare in the Old City. Project funds were provided to Welfare Association by the Arab Fund for Social and Economic Development. The Ramallah-based Riwaq, Center for Architectural Conservation, assisted in the design stage of the work.