Tangier Then and Now 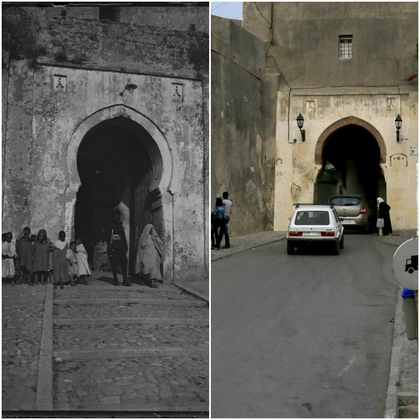 This online exhibition is an expanded, virtual version of "International Tangier: Images from the early 20th and 21st centuries," held in Rotch Library October 29, 2016 - December 15, 2016. The exhibit was sponsored  Aga Khan Documentation Center at MIT and the Program in Middle Eastern Studies at Wellesley College. The exhibit juxtaposed prints from the glass negatives collection of the Tangier American Legation Institute for Moroccan Studies against labels showing recent images of the same places.  This expanded version also includes black and white photographs from the mid 1970s.

Images are arranged in chronological order for each location depicted, starting with the most recent photographs shown on 5 x 4 labels, followed by the 1970s photographs, and ending with those taken in the the early 20th century.  These are followed by brief biographies of the photographer and curator, sub-collections that group images by period, and the city record for Tangier.

In the early 20th century the city of Tangier found itself situated squarely at the center of global politics. Foreign powers had a strong presence in the city since the early 18th century when it was mandated that the city would become the primary center of diplomatic relations between the Moroccan Sultanate and foreign powers, but in the early 20th century, as European powers jockeyed for control throughout North Africa, the position of Tangier on the southern shore of the Strait of Gibraltar made certain that the city was a particular bone of contention.

Even as Morocco was partitioned into French and Spanish protectorates, Tangier remained an international city, with a number of European powers, including the United States, vying for power and influence. Like the protectorates, Tangier was nominally subject to the Moroccan Sultan, but it was effectively governed by an international regime from the beginning of the 20th century until Morocco achieved independence in 1956. The sole exception was a brief period of Spanish occupation during World War II. During this time growing numbers of Europeans took up residence, and the city expanded well beyond the walls that once enclosed the casbah and medina below it.

A collection of glass negatives held by the Tangier American Legation Institute for Moroccan Studies (TALIM) provides powerful and vivid documentation of this era. The negatives were donated to TALIM cancel by the collector Donald Angus, who had purchased them at a local market. They are believed to be the work of Paul Servant, a veteran of the French colonial infantry who remained in Tangier and eventually became President of the "Comité de Propaganda y Turismo," subsequently known as the "Office de Tourisme de Tanger.” His photos appeared in publications of the office, but it is not believed that he made his living as a professional photographer. Nonetheless his photos may be the most extensive visual documentation of the city during the period.

This exhibition presents a small selection of images printed from those negatives, all of which have now been digitized and made available in another collection. Though digitization of the negatives began in in the summer of 1989, all the images in this exhibition were chosen from the images digitized since the summer of 2014 through a collaboration between TALIM, the Aga Khan Documentation Center at MIT, Wellesley College’s Program in Middle Eastern Studies, and the Center for Work and Service, also of Wellesley College.

It seemed a-propos to juxtapose the historic photographs against more contemporary images of Tangier. Only in the past 20 years has Tangier seen a prolonged period of social and economic transformation that rivals, and is likely to surpass, the transformation of the early 20th century. The population has more than quadrupled since the 1990s, and once rural suburbs are now heavily populated, and well integrated into the urban fabric of “Greater Tangier.” To list only a few of the recent changes, a new industrial port has been built 40 km east of the city, and the existing port is being expanded and reconfigured to better accommodate ferries from Europe, fishing boats, cruise ships, yachts, and other leisure vessels. A new train station is now open, and the tracks that used to run along the beach to the port have been removed. The beachfront avenue has been reconfigured to better accommodate both vehicle and pedestrian traffic, part of a much larger scheme of developing the road network in and out of the city. There is also a growing interest in historical preservation, with some of the more significant architecture of the city undergoing restoration.

In this collection recent digital photographs of sites in Tangier are juxtaposed against images processed from the glass negatives.  In some cases, you will also see images from Tangier ca. 1977.  The photographs by John Zvereff were used in “Tangier Then and Now,” the earlier exhibition that inspired this.  It was held at the Legation in Tangier after it opened as a museum in 1976. Through this juxtaposition of photos taken at various times, this collection bears witness to some of the changes in the city between the early 20th and early 21st centuries.

A NOTE ON THE SELECTION OF IMAGES

There are approximately 2000 glass negatives in the collection at TALIM. A substantial portion of the collection is composed of photographs taken in other cities of Morocco, as well as Algeria, France, Spain, and other as yet unidentified locations. There are also several hundred portraits and photographs of seafaring vessels or airplanes. For this exhibition I've chosen from only the images that clearly depict locations in the city of Tangier.
This exhibition was developed in collaboration with the Program and Middle Eastern Studies of Wellesley College, so the photographs featured were chosen from those scanned by Wellesley College interns who went to Tangier during the summers of 2014, 2015, and 2016.
Yet even after applying these criteria, I was still left with the task of choosing less than 20 images from approximately 700-800. At this point my criteria became very personal. I resided in Tangier for the better part of three years between 1992 and 1995, during which time I served as a volunteer with the Tangier American Legation Museum, as it was then known, and as a professor at the King Fahd School of Translation, located in what was then the far eastern outskirts of the city, though that is certainly not the case today. I have continued to visit regularly, and have done extensive research into the history of the city.
To varying degrees, three criteria were used in my selection.  Firstly, I chose images that were informative and enlightening, i.e. photographs that elucidate some aspect of the city’s social history that I find intriguing.  Secondly, I chose images that I found visually compelling, either in their subject matter or in the more formal aspects of the photography.  Finally, I chose images that appeal to my own sense of nostalgia, by depicting places I frequently passed through or which I found particularly intriguing.
‹ › View All
Drag thumbnails
Zoom into map and click to set locations
Select