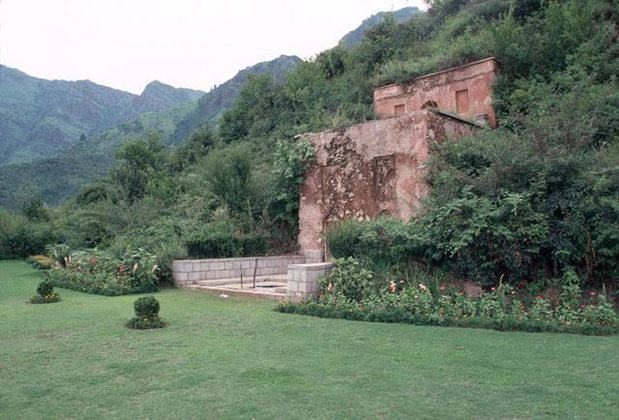 Share
The Pari Mahal garden is located atop Zebanwan mountain, southwest of Dal Lake and approximately 5 km west of the center of Srinagar. It consists of six terraces aligned roughly north-south, with its uppermost point is at its southern end, and arched retaining walls supporting the terraces against the mountain. Yet unlike other Mughal gardens in Kashmir, this garden contains no water cascades or chadars (ramps transferring water from one terrace to another). Its water tanks, which may have formerly contained fountains, are found on different terraces, but they were filled via underground pipes rather than by a flow of water above ground. The overall measurements of the garden are 122 meters long by 62.5 meters wide at its widest point; its terraces vary in width.

Pari Mahal was built in the mid-seventeenth century on the ruins of a Buddhist monastery by Prince Dara Shikoh, the eldest son of Shah Jahan. Prince Dara, a follower of the Qadiri order of Sufi Islam, had a great interest in mysticism, and he built the garden for his Sufi tutor, Mullah Shah Badakhshi. It was used as an observatory for the teaching of astrology and astronomy. Prince Dara was assassinated in 1659 by his younger brother, Aurangazeb, who went on to take control of the empire.

The approach to the Pari Mahal is via a recently made dirt road leading northwest, where the garden is entered on its fourth terrace (counting from the bottom up). The visitor enters the gardens through a domed double archway in the center of an entrance complex. Additional rooms within the complex are entered from the garden side and from within the gateway proper. Their use has been conjectured to include a hammam (north of the entrance gate) and a kitchen (one of two chambers south of the gate). Traces of water pipes have been found in at least three of the rooms in the complex, and the possible hammam is the most highly ornamented room within the structure.

The terraces themselves are accessed via sets of steps on their corners. Each flight of steps measures 6.7 m by 1.3 m. At the center of the sixth, or uppermost, terrace, a water tank with an arched wall is set against the mountain slope. This water tank, which measures 3.43 meters long by 1.52 meters wide on the inside, received water from a water spring located above it that has since gone dry. Previously, the water entered the tank via an arched drain in front of the wall. From the sixth terrace, a baradari, or pavilion, overlooks the lower terraces. This baradari is built on two levels, projecting out over the retaining wall between the fifth and sixth terraces; the upper level is entered from the sixth terrace, while the lower is entered on the fifth terrace.

The fifth terrace has a water tank built of white marble and measuring 12 meters by 8.07 meters; this tank is centered on the axis of the baradari on the sixth terrace. Since no water canals are evident on the site, it appears that the tank received its water through an underground system of pipes. The retaining wall on the fifth terrace has twenty-one arches of rough masonry construction, which decrease in size moving from the center of the terrace outwards. Above the arches is a series of smaller arches, set back closer to the retaining wall. These upper arches increase in size towards the outer corners of the terrace, visually balancing the decreasing size of the arches below. Only the central arch of this wall, which also forms the lower part of the baradari from the sixth terrace, is plastered.

The entrance complex is found on the fourth terrace, which also features an arched rough masonry retaining wall in somewhat better repair than that between the two upper terraces. This wall is further ornamented with niches within each arch. Unlike the retaining wall between the fifth and sixth terraces, the arches of this wall are all uniform in height. Above them, a series of shallow rectangular niches, recessed behind the level of the arches, decorates the upper part of the retaining wall. A plastered baradari with openings on all sides sits on the edge of the terrace; its northern side projects beyond the terrace retaining wall between the fourth and third terraces.

The lower three terraces are simpler in design than those above, which has led to conjectures that the uppermost terraces were reserved for the prince. The third terrace has a water tank which possibly was housed within a since-collapsed baradari. This water tank also projects beyond the terrace wall, and is supported by arcades on the second terrace below. The walls of this projection contain niches on two levels: blind arcades on the lower level and rectangles on the upper level. These rectangles are subdivided into small squares, probably intended to host pigeons. The upper arcade here forms a colonnade that runs in front of its retaining wall. The first terrace holds only a rectangular water tank, on axis with its centerline; it has no retaining wall below it.

After being left in a state of ruin for many years, the garden recently underwent minor renovations, such as the plastering and painting of arcades on the retaining walls. In addition, the side windows one baradari were closed. As of 2008, the garden was still open to the public.