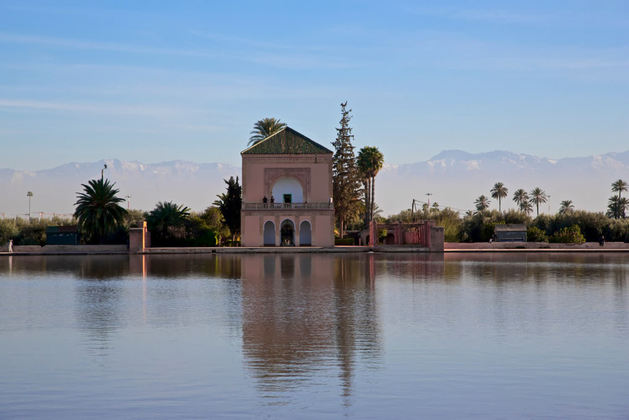 Share
The Menara Gardens in Marrakech were constructed during the early years of the Almohad dynasty. In 1147, Almohad forces under Caliph 'Abd al-Mu'min (reg. 1130-1163) conquered the Almoravid capital of Marrakech. Between 1147 and his death in 1163, 'Abd al-Mu'min undertook several large building projects in the city, which became the capital of his empire. The Menara Gardens and its large central reservoir were built during this period to serve as both productive orchards and personal pleasure gardens for the caliph. The gardens were maintained during the centuries after Almohad rule by the Marinids and the Sa'did Sharifs, and a pavilion structure originally erected by the Sa'dis was rebuilt by 'Alawid Sharif Moulay Muhammad bin 'Abd al-Rahman (reg. 1859-1873) in the late nineteenth century.

The Menara Gardens are approximately 720 meters wide east to west and 1.25 kilometers long north to south. The longitudinal axis of the gardens is rotated twenty-seven degrees counter-clockwise from the north-south meridian. While the gardens are within the city limits of present-day Marrakech, at the time of their construction they were located two kilometers outside of the city walls. To allow 'Abd al-Mu'min convenient access from his home inside the city walls, the garden gate was connected by a direct road to Bab al-Mahzan (1126-1147), the city gate that opened directly into the caliphal palace in the Medina. The Bab al-Mahzan, the road, and the Almohad palace to which it led were destroyed after the fall of the Almohad empire in the thirteenth century. Today the gardens are connected to the Médina by the Avenue de la Menara.

The majority of the gardens are occupied by orchards of olive, cypress, and fruit trees. The trees in the orchards are planted on a ten-meter grid, imposing a strict regularity on the landscape. Pathways through the garden fit into the logic of the grid, as ten-meter wide dirt paths fit between rows of trees to divide the field into approximately twenty-five rectangular parcels of varying sizes and orientations.

The main feature of the Menara Gardens is the large reservoir located in its center. The reservoir is 160 meters wide east to west and 195 meters long north to south, its long axis rotated from the north-south meridian to align with the grid of the gardens. In order to provide irrigation to the surrounding orchards without the need for constant pumping, the reservoir was constructed entirely above ground. A complex network of underground irrigation channels relies on gravity to drain water from the main reservoir through the channels and distribute it evenly through the gardens. The reservoir itself receives water through a series of subsurface irrigation channels that originates in an upland aquifer in the Atlas mountains. These long-distance gravity-flow channels are known variably as qanat or khettara, and they have been employed extensively in central and southern Morocco to create habitable oases in dry areas. The Marrakesh khettara were originally constructed by Almoravid Caliph 'Ali bin Yusuf (reg. 1107-1142) to irrigate the gardens of the Palmerie.

The elevated reservoir is surrounded by a five meter wide terrace along its perimeter. Several narrow stairways, each 2.5 meters wide, are spaced at irregular intervals around the perimeter of the basin to provide access to the terrace from the ground level of the garden. The edge of the stone basin and terrace are extremely sober in their articulation, with clean rectangular forms and almost no ornamentation. The austerity of the architectural detailing reinforces the character of the Menara Gardens as a working landscape.

The only exception to the strict geometric framework of the garden grid is the principal entry road, which leads from the main gate on the eastern edge of the garden to a handsome pavilion at the center of the south side of the Menara basin. The nineteen-meter-wide pedestrian path was constructed or reconstructed under the 'Alawid dynasty, centuries later than the other dirt paths between the trees. This walkway is paved with red concrete and tile, employing a large-scale repeating box pattern. Each module of the paving pattern is 12.5 meters long and 9.5 meters wide. The path is two modules wide, and thirty-three modules long, with a total length of 412 meters.

The entry path terminates at the eastern edge of a small enclosed garden measuring thirty-eight meters wide east to west and fifty-two meters long north to south. This enclosure is aligned with the main grid of the gardens, and its north edge borders the south edge of the elevated reservoir, just slightly to the west of the basin's center. The small sub-garden, lushly planted with a wide variety of trees and flowering plants, functions as a physical and conceptual threshold between the city behind and the water beyond.

Within the enclosure is a small square pavilion, Le Menzeh, measuring twelve meters to a side in plan. The two-story pavilion is approximately fourteen meters tall. A rectangular loggia measuring twelve meters wide and four meters long projects from the north elevation of the otherwise square structure. Three arched openings on the ground floor of the north elevation of the loggia lead to a platform raised approximately 0.5 meters above the main promenade around the reservoir. The second level and balcony are located approximately four meters above the ground level of the pavilion. Passage through the pavilion along its north-south axis allows entry to the raised basin terrace from the small garden enclosure to the south.

The pavilion is decorated plainly, to match the simplicity of the rest of the architecture of the basin and gardens. The two-story pavilion was built in pisé, or rammed earth, with decorative brick quoins at the corners and cornices. The structure possesses the reddish hue characteristic of pisé work in Marrakesh, where the red dirt of the region colors many earthwork structures. The upper cornice directly below the roofline of the pavilion features bands of geometric tilework. The pyramidal roof is covered in green ceramic tiles, a roofing material typical among royal and institutional buildings in Marrakesh.

While its proportions and composition are harmonious, the north elevation of the pavilion, including the loggia and balcony, is almost completely unadorned. Much more attention was paid to the decoration of the south elevation. The threshold on the south elevation of the pavilion is defined by a round arch in pisé that was subsequently painted to appear as if it were constructed of brick. The spandrel between the arch and a raised rectangular pisé enclosure is adorned with painted geometric motifs and Arabic inscriptions. Three rectangular windows on the upper part of the south elevation are similarly framed by raised pisé borders. These borders are painted with a series of Rub el Hizb, eight-pointed stars traditionally used as an ordering symbol in the Koran. The casement windows contain leaded glass panes in wood sashes, with operable wood shutters that open to the exterior. These wood shutters are painted in blue, green, white, and red tones with multicolored geometric motifs at their centers. Each of the three windows is capped by a simple, two-tiered rectangular cornice moulding and decorative pisé relief panels with concave-arc profiles.

The interior of the structure features several examples of fine multicolored stucco work, primarily defining the undersides and spandrels of pointed-arched openings in the thick interior walls. The multicolored patterns of the sculpted stucco sharply contrast with the otherwise starkly white painted walls. The floors inside the pavilion are covered by large tiles in either monochrome or checkered patterns. A set of carved and painted ornamental wooden doors border the archway that provides access to the interior stairway leading to the balcony.

It has been suggested that the name of the gardens derives from the pleasant pavilion structure, as "menara" can mean minaret or tower in Arabic. However, others argue that the name "menara" could have been associated with the gardens since the time of the Almohads, preceding the construction of the pavilion. The minaret referenced in the name may be instead the minaret of the Kutubiyya Mosque (1147-1162), a spectacular tower in the Médina which was also commissioned by 'Abd al-Mu'min. This theory is supported by the alignment of the Avenue de la Menara, the boulevard between the Médina and the gardens. This major road creates an axis between the Menara pavilion and the Kutubiyya minaret, and the entry road within the garden diverges from the established grid of the landscaping to reinforce this visual connection.

Today the Menara Gardens are accessible to the public and they continue to serve as a relaxing and picturesque oasis outside of the crowded Médina. The Menara Gardens were listed as an UNESCO World Heritage Site in 1985, as a part of the Médina of Marrakesh.