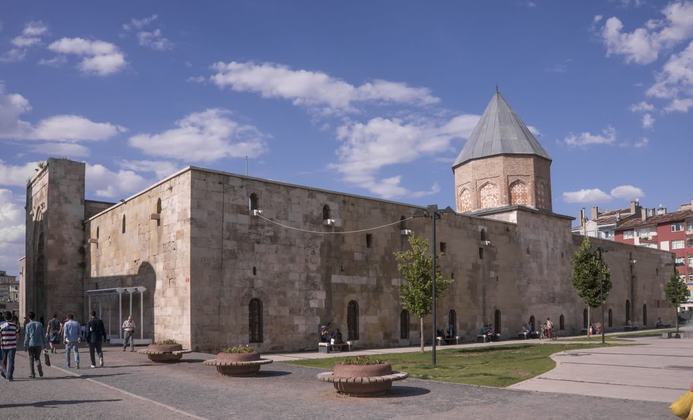 Seljuk Sultan Izz al-Din Kaykavus (Izzeddin Keykavus) founded this hospital in Sivas in 1217-1218/614 AH. At forty-eight by sixty-eight meters, it is the largest extant Seljuk hospital. Kaykavus also included a tomb chamber for himself, where he was buried after his death in 1220/618 AH. According to the original Arabic deed, the hospital was a center of internal medicine, surgery, and mental health. It was built with a small medical school which is no longer extant.

The hospital is situated within what was once the town’s lower citadel: a walled area roughly rectangular in shape that encompassed a mosque, madrasas and other government buildings. It faces the Çifte Minareli Medrese, whose portal opens directly opposite that of the hospital to the west.

The hospital is built of stone with a rectangular plan centered on a courtyard. One enters through a monumental portal on its west side which projects from the facade and includes a muqarnas hood. The portal's façade is decorated with interlocking geometric carvings and two badly damaged lion figures above the hood. An inscription, written in Sülüs script above the entryway, gives the name of the donor and the date of completion.

The portal opens into a high narrow entrance hall flanked by two rooms on each side. At the end of this passageway, a muqarnas-vaulted portal surmounted by an ornate window gives onto a deep portico on the west side of the courtyard.

The courtyard is rectangular in plan with a large sunken pool at is center. A vaulted arcade with large brick piers paneled in stone surrounds it on its north, south, and west sides. On the east side is a façade with a large central iwan whose archway dominates the other arched entrances to the courtyard. This iwan is groin vaulted, and decorated with a band of geometric carving on its grand arch, above which are stone heads representing the sun and moon.

Behind the arcades on the north and south sides are chambers equipped with fireplaces on either side of larger central chambers. On the north side, a central iwan would have opened onto what was once the medical school. On the south side, the place of the central iwan is occupied by the vaulted tomb chamber of Kaykavus I.

Sultan Kaykavus’ tomb is one of the few tombs of a Seljuk sultan that has survived. It is a square chamber topped by a decagonal base supporting a ten-sided conical vault. The ten-sided form is reserved for the sultans; it is seen elsewhere only in the Tomb of Kiliç Arslan in Konya. Its decagonal base, which rises above the hospital walls, is decorated with geometric Kufic inscriptions in glazed blue tiles that are inscribed in brick niches. The vault is a wooden replica of the original. The rich red brick and glazed tile decoration of the tomb façade and interior stands out against the stone decoration of the hospital, and is the first of its kind in Anatolia. Two tile inscriptions on the tomb façade give the name of Ahmad of Marand, a craftsman from Azerbaijan, who brought with him the influence of the Great Seljuks of Iran. A tile inscription plaque above the tomb entrance gives its date of completion as 617 A.H. (1219/1220).

The hospital was later used as a madrasa, hence it is also known as the Sifaiye Madrasa (Medical Madrasa). It was renovated in the early 2000s to host the Sivas Seljuk Research Center and the Museum of Educational History.